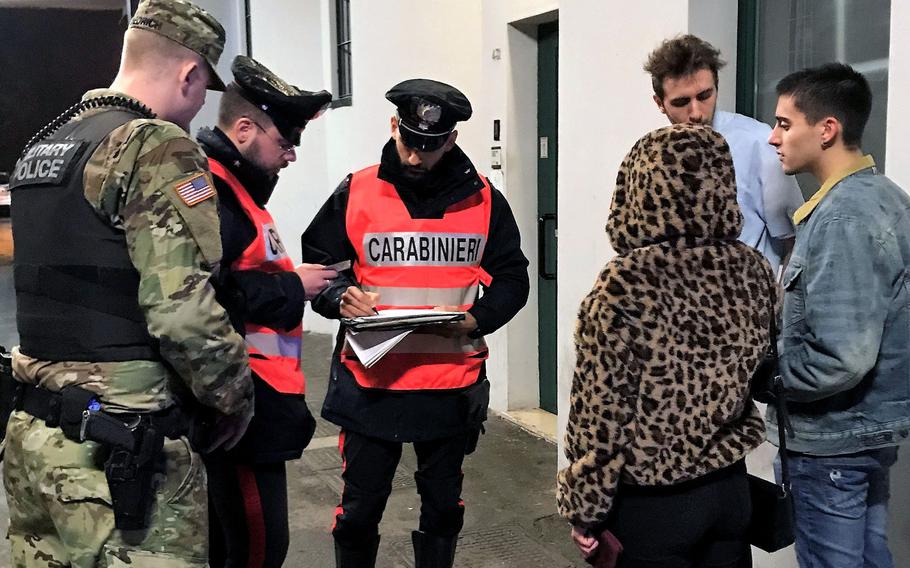 Italian Carabinieri and military police conduct random ID checks at the entrance of a nightclub in Vicenza during a joint patrol in 2018. A local nightclub has been placed off limits to soldiers here for the first time in years as Army officials try to keep troops away from harm. (Anna Ciccotti/U.S. Army)

VICENZA, Italy — A local nightclub has been placed off limits to soldiers here for the first time in years as Army officials try to keep troops away from harm and out of the headlines.

Custom Club was put off limits in January after “more than a dozen cases of soldiers being hurt, robbed and taken advantage of,” said James Brooks, U.S. Army Garrison Italy spokesman. The club has also been the scene of fights and employs some “heavy-handed” bouncers, Brooks said.

The garrison’s action came after a moribund committee — the Armed Forces Disciplinary Control Board — was reconstituted by the garrison late last year. He said it was unclear how long there hadn’t been one.

“In 10 fights, probably two are at Custom,” he said, while the rest happen in the street.

Club security separates aggressive patrons, but not with excessive force, he said.

“This is probably the main reason (the club was put off-limits) — people come back to the base in bad health from drugs or too much alcohol,” Terraroli said. “But it’s not my responsibility; it’s (the soldier’s) responsibility.”

That initiative was driven by “a number of incidents involving U.S. personnel that reflected negatively on the Vicenza Military Community and its relationship with the city of Vicenza,” according to garrison officials.

Brooks said that the Italy garrison’s Better Opportunities for Single Servicemembers program has also attempted to steer troops toward healthier behaviors with alternative activities, such as midnight soccer and basketball games.

Vicenza-based troops and their families were involved in “550 law enforcement interventions” in 2018, Francesco Provvidenza, commander of the base Carabinieri, told Italian media last week.

Brooks said it wasn’t clear what that 550 number referred to. He said that U.S. officials couldn’t reach Provvidenza to clarify.

Last year, police were called to multiple fatal incidents involving Americans, including a murder-suicide involving a retired major who killed his wife; a motorcycle fatality; and at least two instances of soldiers being found dead in their barracks, in at least one case from apparent alcohol poisoning.

A young soldier with the 173rd Airborne Brigade also assaulted police called to a strip club to restrain him and was given a suspended one-year jail sentence.

Since January, a paratrooper was found dead in his barracks room. Officials declined to say what caused his death.

Another was rescued by firefighters from inside a gated area where he was found pantless, rummaging inside a garbage container. He was photographed for the local news being given a blanket. Officials declined to say how the soldier had ended up that way.

Off-limits designations are supposed to prevent troops from visiting establishments associated with all manner of danger: drugs, prostitution and human trafficking, gambling, hate groups and terrorism.

The designation can also be levied against businesses for unfair practices or undesirable conditions.

Servicemembers who visit off-limits businesses may receive non-judicial punishment, such as restriction and pay loss.

U.S. garrisons differ widely on numbers and reasons for the designation.

USAG Yongsan-Casey, for example, had put nearly 40 businesses, most of them clubs, off limits as of January, often for human trafficking.

Last year, the Kaiserslautern Military Community in Germany listed nine businesses, including car repair and sales, day care centers and a massage therapist whose license was revoked in Florida the year before for sexual abuse. Most appear to have been on the list for years.

In Naples, no businesses are currently off limits, a Naval Support Activity Naples spokesman said.

Stars and Stripes reporter Scott Wyland contributed to this report.