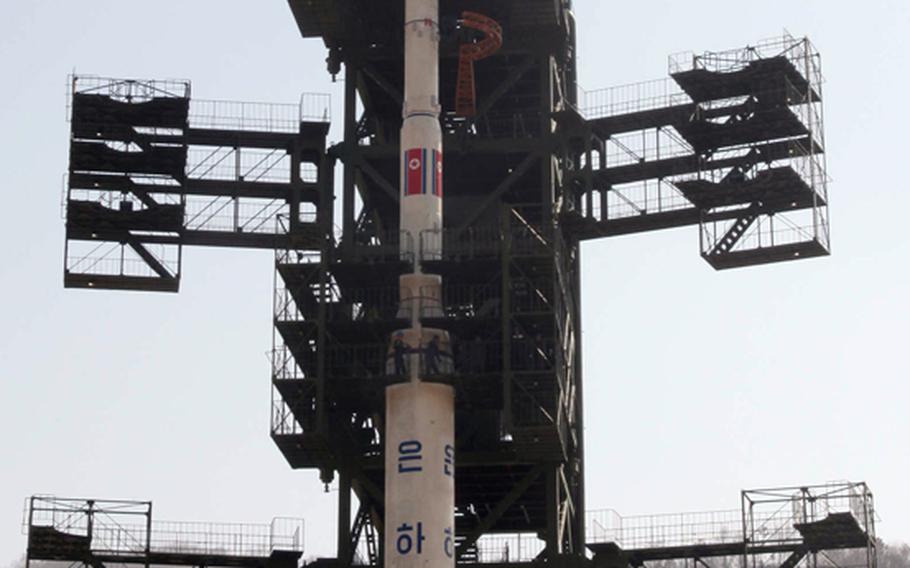 The Unha-3 rocket for launching Kwangmyongsong-3 satellite installed on the launch pad at Tongchang-ri base, the Democratic People's Republic of Korea (DPRK) is seen in this April 8, 2012 photo. Media reports said the Democratic People's Republic of Korea launched an earth observation satellite on April 13, 2012, where it broke up quickly and splashed into the Yellow Sea. (Zhang Li/Xinhua/Zuma Press)

SEOUL &mdash; The U.S. State Department is downplaying concerns within Asia that North Korea is preparing for a long-range missile test and said it has no fresh information about a possible launch.

&ldquo;We don&rsquo;t have anything new at the moment,&rdquo; spokeswoman Victoria Nuland told a news conference Monday in Washington, D.C. &ldquo;We&rsquo;ve seen the same rumblings and press reportings that you&rsquo;ve seen.&rdquo;

Nuland&rsquo;s comments marked the first time the State Department has publicly addressed media reports from Japan and South Korea claiming the North is preparing for a launch.

South Korean military and government officials confirmed last week that Pyongyang is readying a new missile for testing at a launch pad that has been used for other rocket tests, according to Yonhap News. However, a spokesman for the Ministry of National Defense said Tuesday he could not confirm such preparations were under way.

Japanese newspapers have reported in the past week that a U.S. satellite has detected signs that the North is moving missile parts from a factory to a launch site in Tongchang-ri, and that the movements are similar to those observed before Pyongyang&rsquo;s failed April missile test.

The missile exploded within two minutes of liftoff. Pyongyang claimed it was trying to send a satellite into space for peaceful observation purposes.

Japan&rsquo;s Asahi Shimbun reported Sunday that North Korea tried to ship materials to Myanmar that could be used for uranium enrichment or missile development, though Nuland said the U.S. had not been able to confirm the report.

Many in South Korea, including Defense Minister Kim Kwan-jin, have expressed worries that the North might conduct a provocation to influence the outcome of the Dec. 19 presidential election.

&ldquo;The North could commit provocative acts to stir up fear of war among South Koreans before the election, and after the election it could launch a provocation&rdquo; in an attempt to test the new government, Kim was quoted as saying by the Chosun Ilbo last week.