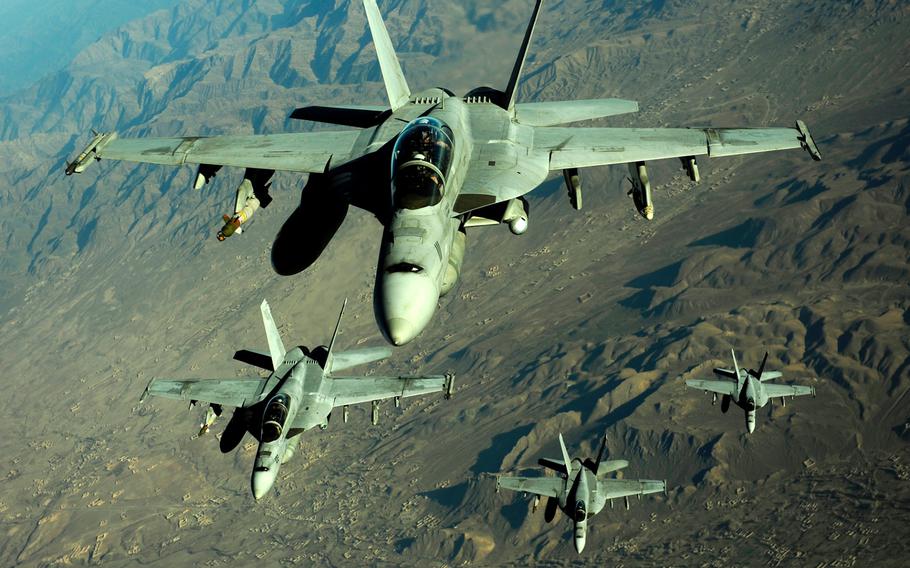 Four U.S. Navy F/A-18 Hornet aircraft fly over mountains in Afghanistan on Nov. 25, 2010. According to a report Thursday, Dec. 14, 2017, a team of NASA investigators recently reported that the Navy missed a series of key factors in its investigation into the causes behind a rash of midair, oxygen-related failures in F/A-18s. (Andy M. Kin/U.S. Air Force)

WASHINGTON — The Navy missed a series of key factors in its investigation into the causes behind a rash of midair, oxygen-related failures in F/A-18s, which led to the deaths of at least four pilots, a NASA team concluded in a recently released report.

The 258-page report, which is slated to be the focus of an upcoming House Armed Services Committee subpanel hearing, signals the Navy has plenty of work to do to create safer flying conditions for its pilots.

The findings raised an alarm for at least one key lawmaker Thursday.

“I know that hundreds of dedicated people in the Navy are working very hard to address this problem but the report points out that we have a long way to go and that in some areas we can do much better,” said Rep. Niki Tsongas, D-Mass., who helped spearhead the push for the study. “I am hopeful that the Navy will carefully examine the findings of this report and act on them as quickly as possible.”

Tsongas is the ranking Democrat for the House Armed Services subcommittee on Tactical Air and Land Forces, which plans to hold a hearing on the matter in January.

The chairman of the panel, Rep. Mike Turner, R-Ohio, agreed that much work remains after reading the report, which was delivered to his committee last week.

“There is no doubt this remains a complex problem to solve that requires a well-coordinated ‘systems approach’ to include all factors such as the aircraft, the pilot, and the environment,” Turner said. “These incidents have a direct effect on overall readiness. These episodes affect the confidence of our pilots and their ability to perform, because it is not just these events occurring, it is also the anxiety of these events occurring in succession.”

Ahead of the report’s public release this month, NASA in April shared some initial concern that the Navy didn’t have one leader on the issue. In August, the Navy appointed Rear Adm. Sara Joyner to lead the service’s physiological episode action team.

On Thursday, Joyner said NASA and the Navy reviewed the report together, though her team remains focused on efforts to “warn the aircrew, fix the machine, protect and prevent.”

“The NASA debrief was extremely helpful in emphasizing areas where we could focus more attention and we continue to keep NASA on as a consultant to help structure our approach,” she said. “We are working diligently to determine all the root causes of (physiological episodes) and find solutions, and we will continue to aggressively prioritize resources and engineering efforts.”

The NASA report is the result of a provision in the 2017 National Defense Authorization Act directing an independent review be conducted of recurring “physiological episodes” for Navy pilots. In turn, the Navy asked NASA’s assistance, which began investigating the problem in March.

A physiological episode, which entails pilot impairment as the result of a lack of oxygen or other contributing factors, can involve decompression sickness, disorientation, hypoxia, cognitive impairment, inability to read or interpret data and instrumentation, numbness and pain, among other factors, the report states. The episodes, also known as PEs, can have deadly consequences, with incidents of some pilots passing out mid-flight, leading to a fatal crash.

In June, the Navy said in a review that four pilot deaths were tied to oxygen system failures in the cockpits of F/A-18 Hornets. The review had said reports of oxygen failures in the Hornets had increased from 57 in 2012 to 125 in 2016. By June 2017, the figure had already reached 52.

“While the Navy has introduced a number of corrective actions to address what was believed to be the primary causes of these events, PEs are still occurring,” according to the report from the NASA’s Engineering and Safety Center.

The Navy focused on aircraft fixes, instead of its pilots and crew, missing critical factors in its probe, the NASA team found.

The physiological episodes “do not happen to planes, they happen to people,” the NASA team said in the report.

“For a long time the Navy made the assumption that the (physiological episode) resulted from a defect in one or more components of the aircraft” and the aircraft would be taken out of service, the report states. “No serious attention was paid to the interface of the human and the machine, or how they function during flight.”

The Navy fixes included changes to the aircraft, such as relocating the cabin pressure gauge to make it more visible when pilots wear night-vision goggles, updated maintenance and operating procedures, and improved cabin pressure diagnostic testing equipment. By 2012, a new system was introduced to track aircrafts with a history of oxygen problems.

“It places particular attention on the aircraft’s oxygen generation and cabin pressure systems, raising significant questions regarding both,” she said.

“The report examines internal Navy organizational challenges that may be making it much harder to address the PE issue,” she said. “The report focuses attention on the need for the Navy’s medical community to be more tied into the Navy’s ongoing lines of effort.”

The report also raised concerns about a breakdown in leadership trust among pilots, which the report contends is critical in light of pilots being asked to take on risky tasks. In April, more than 100 Navy pilot instructors for the T-45, which has also seen oxygen failures, temporarily refused to fly in protest of the slow pace of Navy fixes on oxygen failures.

“There has been a breakdown of trust in leadership within the pilot community,” the report stated. “This has been precipitated by the failure to find a definitive cause for the PEs, the implementation of ‘fixes’ that do not appear to work … and the belief that Navy leadership is not doing enough to resolve the issue.”