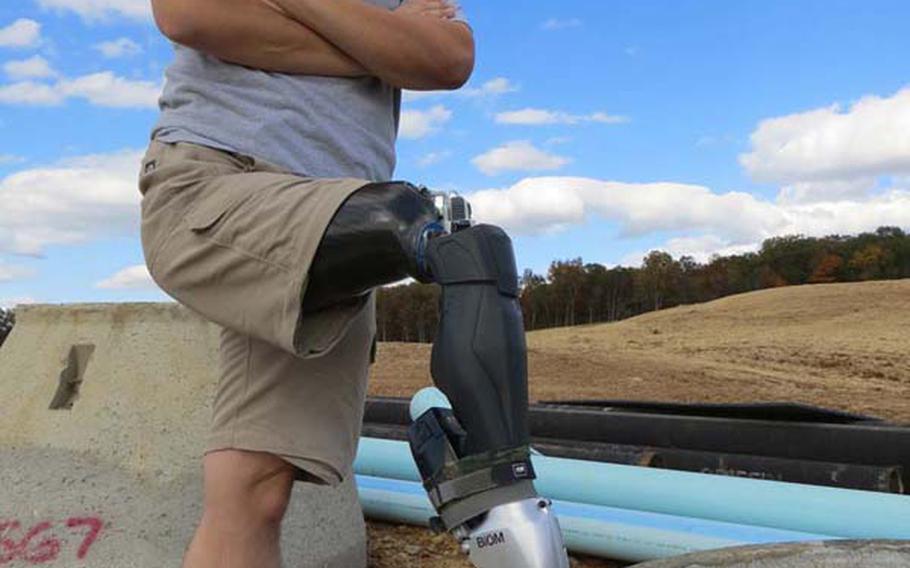 New developments in lower limb prosthetics that mimic the human body have dramatically improved the life of retired Marine William Gadsby, who was wounded by an IED and sniper's bullet in Iraq that ultimately claimed his right leg. (Courtesy of William Gadsby)

New developments in lower limb prosthetics that mimic the human body have dramatically improved the life of retired Marine William Gadsby, who was wounded by an IED and sniper's bullet in Iraq that ultimately claimed his right leg. (Courtesy of William Gadsby) 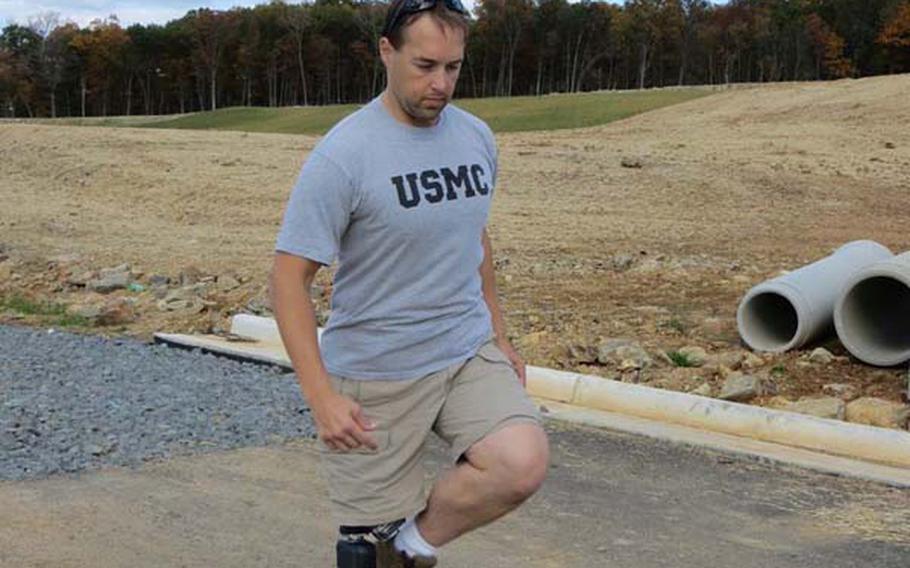 One of the hardest things for lower limb amputees to do is to pick up their leg and prosthetic and step over an obstacle or object. Here, retired Marine William Gadsby shows how easy it is using his X2 microprocessor knee and BiOM ankle. (Courtesy of William Gadsby) 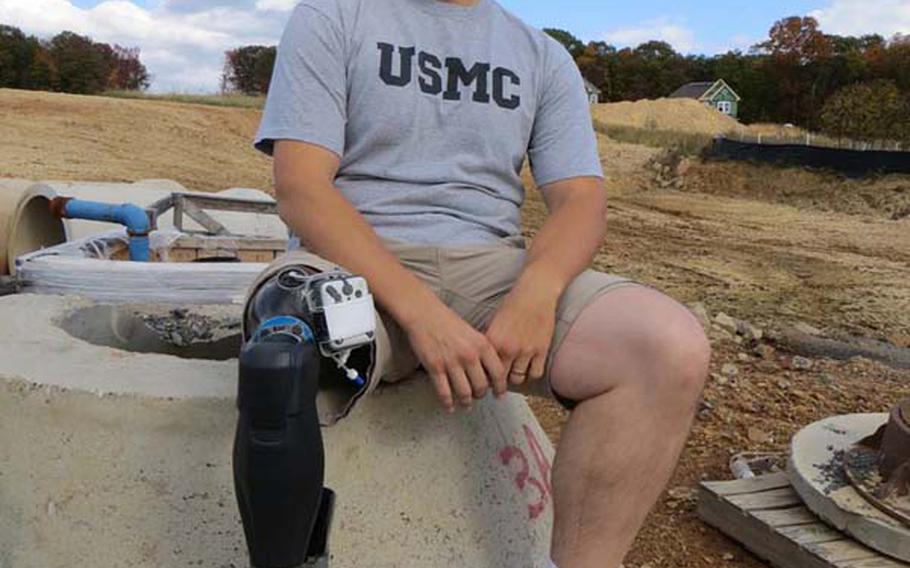 New developments in lower limb prosthetics that mimic the human body have dramatically improved the life of retired Marine William Gadsby, who was wounded by an IED and sniper's bullet in Iraq that ultimately claimed his right leg. Here, Gadsby wears his X2 microprocessor knee from Ottobock and BiOM ankle, developed by iWalk. When used together, Gadsby can walk with a natural gait like the uninjured, without pain and fatigue, and has resumed his active lifestyle. Gadsby can now hike mountain trails and walk naturally on sand dunes, something that has allowed for exercise and greatly improved his mental well-being. (Courtesy of William Gadsby) 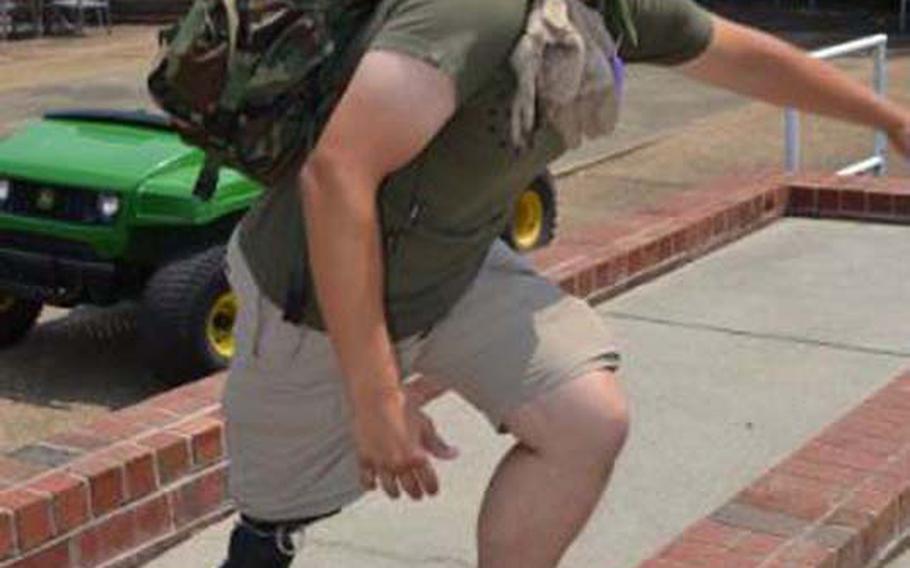 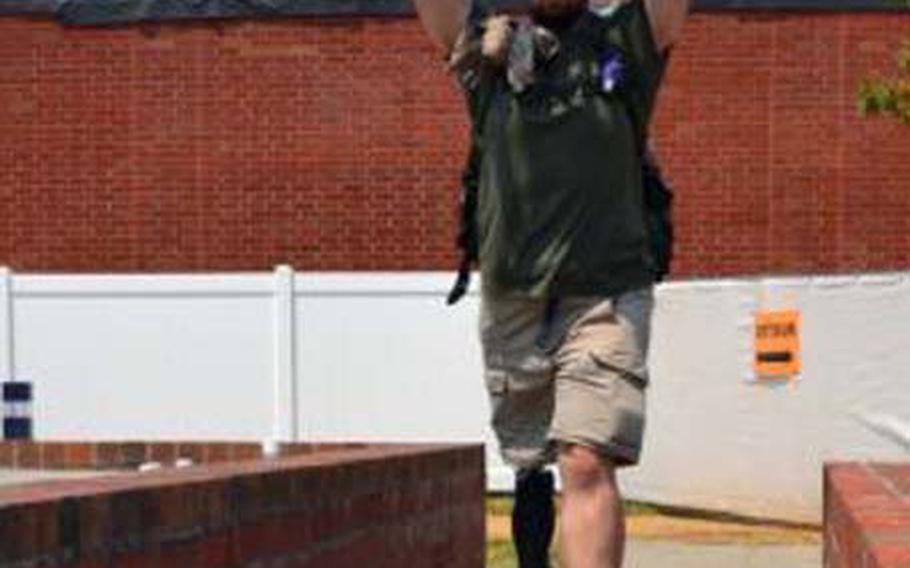 Retired Marine William Gadsby carries a chair over his head to show off his X2 microprocessor knee from Ottobock and BiOM ankle, developed by iWalk. When used together, Gadsby can walk without pain and fatigue with a natural gait like the uninjured. (Courtesy of Richmond VA Medical) 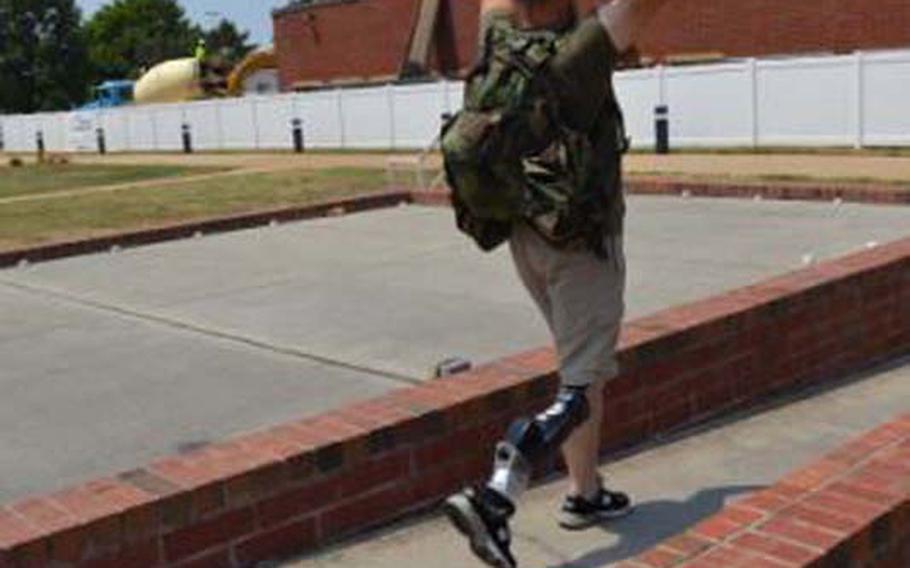 Retired Marine William Gadsby says that prosthetics have dramatically improved his mental well-being and life, and have allowed him to resume a highly active life. (Courtesy of Richmond VA Medical) 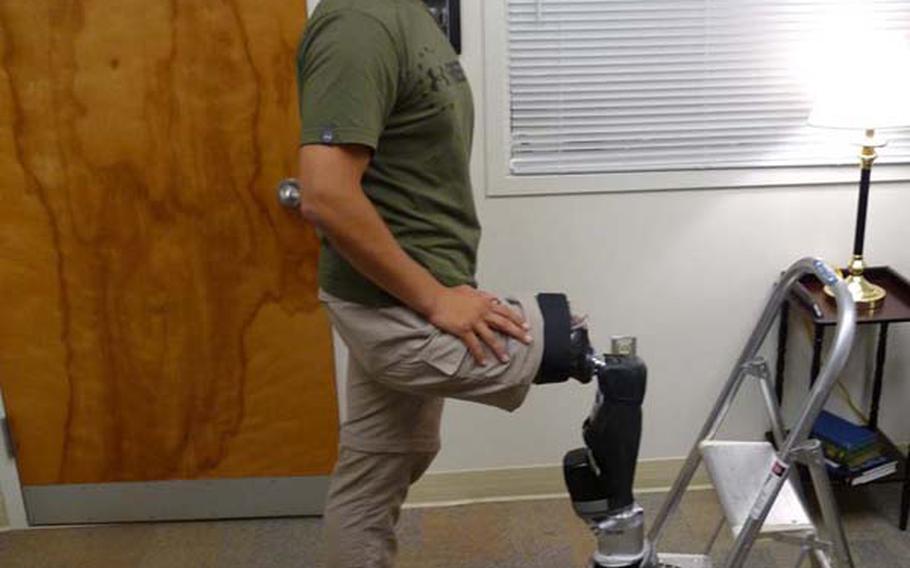 Thanks to his X2 microprocessor knee from Ottobock and BiOM ankle, developed by iWalk, retired Marine William Gadsby can walk with a natural gait like the uninjured, without pain and fatigue. (Courtesy of Richmond VA Medical) 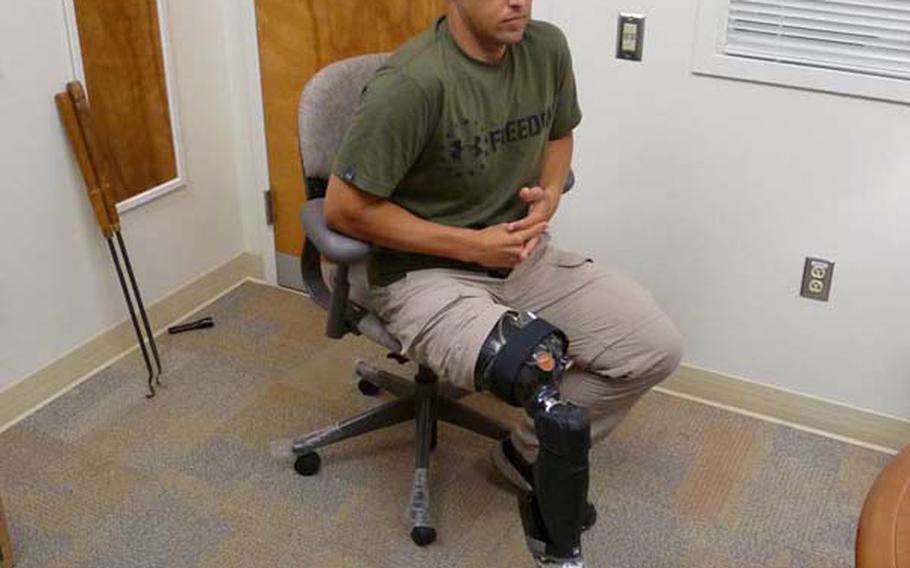 Retired Marine William Gadsby shows off his X2 microprocessor knee from Ottobock and BiOM ankle, developed by iWalk. When used together, Gadsby can walk with a natural gait like the uninjured, without pain and fatigue. (Courtesy of Richmond VA Medical)

Retired Marine William Gadsby traverses mountain trails and sand dunes with a 50-pound pack on his back, setting the pace for his wife and 3-year-old son.

Not bad for a guy who lost his right leg above the knee to an improvised explosive device in Iraq in 2007.

Thanks to two prosthetic products developed by separate companies, Gadsby can walk with a natural gait, up stairs and over obstacles, vastly improving not just his quality of life but his mental health.

His success and other technological advancements bode well for wounded warriors; one company’s goal is to make artificial limbs that are superior to natural ones.

Since the wars in Iraq and Afghanistan began in 2001, the number of amputees has risen as IEDs have become a primary weapon for insurgents. Defense Department statistics say 240 servicemembers lost major limbs last year, the highest annual total since the two conflicts began more than 10 years ago.

Gadsby uses the X2 knee by Ottobock and the BiOM ankle/foot combination from iWalk. The two were paired at Hunter Holmes McGuire VA Medical Center in Richmond, Va.

The iWalk ankle uses robotics to replace the missing calf muscle and Achilles tendon to offer an active push-off when climbing stairs. It is the first to generate power internally while the subject walks, Webster said.

The X2 knee has a complex system of gyroscopes and accelerometers that send information through the microprocessor, anticipating the next step and adjusting for it. The microprocessor can set the hydraulic cylinders to be flexible, movable or rigid, depending on what the user is doing.

“It allows many veterans and servicemembers to be more independent and to trust their prosthetic more,” Miller said. “Putting them together is a neat idea.”

The pairing had an immediate impact. For the first time since his injury, Gadsby was able to take walks and look up at the stars at night without stopping to balance himself.

John Fox, supervisor of the Orthotic and Prosthetic Services Lab at Hunter Holmes McGuire, said the BiOM ankle is the first prosthesis to offer plantar flexion, the motion of the toes pointing down, giving that push-off. Others have offered dorsi flexion, the toes pointing up. Both movements are equally important to walking naturally.

“Eliminating disability and blurring man and machine will be one of the great stories of this century,” iWalk founder and Principal Investigator of the Biomechatronics Group of MIT’s Media Laboratory, Dr. Hugh Herr, said in a statement to Stars and Stripes.

An iWalk spokeswoman said the company’s goal is to make artificial limbs better than the originals. However, doing so doesn’t come cheap.

Gadsby received his prosthesis at no cost; medical benefits are provided free to veterans registered with the VA. A patient doesn’t have to be a combat-wounded veteran to qualify. An amputee clinical team evaluates each patient and determines the best prescription, taking into account the veteran’s availability and physical condition.

Gadsby, 34, wants wounded veterans to know what is out there because while the Department of Veterans Affairs can be helpful, they don’t advertise some of the cutting-edge technology.

“Most veterans don’t know about this stuff,” Gadsby said. “There’s no reason to hobble around on a stick.”

Before Gadsby joined the Marine Corps in 2003, he was an avid runner, hiker and cyclist. He liked the independence and solitude, often biking 100 miles. He would bike to a mountain, then hike to the peak. Sometimes he even ran later in the day.

“It was just me, God and country,” he said. “I was the commander of my own fate. You lose your leg, all that stuff changes.”

Just missing the invasion of Iraq, his infantry unit headed to Ramadi in 2004, where constant enemy contact claimed casualties. He returned to Iraq as a corporal, part of the “surge” in May 2007, and found a different country, one capable of standing on its own.

“That last deployment was kind of a quiet one until I got wounded,” the California native said.

Gadsby and his fellow Marines were tasked with pushing insurgents into the farmlands of Al Karmah near Fallujah and finishing them off.

“We noticed a lot of civilians were dying from IEDs,” Gadsby said. “It was a nasty little place.”

Gadsby and his squad leader were wounded on foot patrol when a bomb detonated at knee level, rendering his right leg immobile.

A brave corpsman rushed to help Gadsby as blood poured from his wound. A sniper tried to shoot the corpsman in the head but hit Gadsby in the left knee.

“I was lucky because I almost lost that leg as well, but they saved it,” he said.

His right leg was amputated before Gadsby was sent first to Baghdad, then to Kuwait, Germany and finally, Naval Medical Center San Diego, where he fought a bone-eating superbug and spent months in bed.

Gadsby was fit with his first prosthetic months later. Others followed. Some were too slow, hurt his back or threw his hip out. Others locked up when they got wet at the beach or required so much effort they wore him out.

He fell a lot.

Deep depression set in. He couldn’t do the things he wanted, the way he wanted. When he tried to sit down, the lack of resistance in his knee sent him crumbling into his seat. He had to walk like a “crab” going down a steep incline. He was forced to retire from his beloved Marine Corps.

“I was living under a dark cloud for a long time,” he said. “Having your limbs taken away takes some of your dignity away.”

But Gadsby persevered. He met his wife, Tatiana, by a waterfall atop a California peak not long after his injury and moved to the East Coast to be with her in 2008; they were married the next year. His son was born two years almost to the minute of his injury, named for the corpsman who saved him.

He also did research online, talked with other wounded warriors and upgraded to new prosthetic knees and ankle/foot models. Each was better than the last but not quite what he wanted.

The combination allowed him to walk up stairs and to step over things instead of swinging his prosthetic leg around like a “helicopter.” He could play with his son and carry him without fear of falling.

“It’s really changed my life,” said Gadsby, who lives in Ashburn, Va. “It’s the closest thing I’ve ever seen to being a real person again. Psychologically, this is a big deal as well.”

He likens the X2 and BiOM ankle to John Lennon and Paul McCartney. Each was good on his own, he said, “but you put them together, and they’re like the dream team.”

Not ready for market

Miller and Webster caution that the X2 and BiOM ankle have been paired only a few times, so questions remain and studies are expected soon. Wounded veterans need to understand that just because the products exist, it doesn’t mean they’re right for everyone, they say.

“It is a very individualized process,” Webster said. Fox said he hasn’t put both devices on another veteran yet.

Ottobock is working on an X3 knee with military service in mind. Miller said it will be able to withstand dust, dirt and water, and to absorb greater impact when jumping.

Zac Vawter, who lost his right leg in a motorcycle accident, used a research prototype of a bionic leg — controlled by the wearer’s thoughts — to climb Chicago’s 103-story Willis Tower on Nov. 4. But the developers say they need to refine the steering and likely are years away from bringing it to the market.