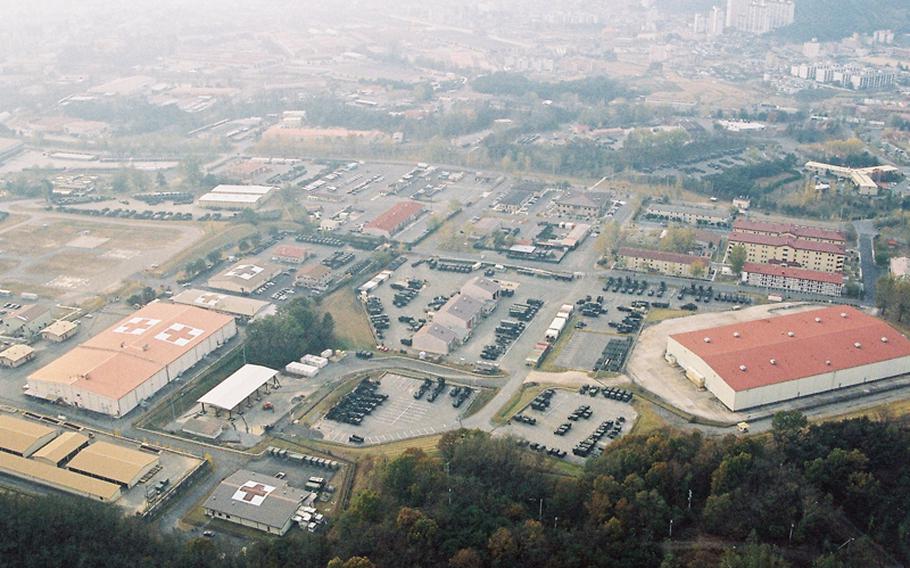 SEOUL &mdash; The 8th U.S. Army said Tuesday that the military has no evidence that Agent Orange was buried at Camp Carroll, aside from statements made by former soldiers stationed at the Daegu-area base in the late 1970s.

&ldquo;That&rsquo;s the only thing that&rsquo;s leading us,&rdquo; said spokesman Lt. Col. Jeff Buczkowski. &ldquo;Nothing else backs it up. We&rsquo;ve had other statements that said it wasn&rsquo;t Agent Orange (that was buried), it was other things.&rdquo;

Meanwhile, South Korea announced that it plans to conduct an environmental survey of 85 former U.S. military bases returned to South Korean control following allegations that chemicals were buried at one of those bases in the 1960s.

The environmental survey, as well as a joint U.S.-South Korean investigation into the possibility that Agent Orange was buried at Camp Carroll, come at a time of growing concern within South Korea over the U.S. military&rsquo;s alleged past use and disposal of defoliants and other chemicals.

Three veterans told a Phoenix-area television station last month that they helped bury drums of Agent Orange at Camp Carroll in 1978 and now suffer health problems related to their exposure to the toxic chemical. Since then, a number of U.S. veterans and South Koreans have claimed that they helped spray Agent Orange or other chemicals, and know where large stores of chemicals are buried at U.S. bases.

An official with the Ministry of National Defense said Tuesday he did not know when the survey, which is being conducted to check for overall environmental contamination as well as Agent Orange and other chemicals, would begin.

South Korean officials have collected water samples from 10 locations on Camp Carroll, and they will continue collecting samples this week, according to the Prime Minister&rsquo;s office. The 8th Army also plans to use a ground-penetrating radar that can detect buried objects at the base later this week.

Buczkowski said a South Korea-based military investigation team, led by a U.S. Forces Korea colonel, has conducted four in-person interviews in the U.S. with people who claim that Agent Orange was buried on the base, including some of the vets who spoke to the Arizona TV station. The team plans to interview a fifth person, former USFK employee Koo Ja-young, who said he saw additional burials of chemicals near the bachelor officers&rsquo; quarters and fire department. Others have said the chemicals were buried near the helipad.

The team also plans to consult Alvin Young, a U.S.-based environmental toxicology expert who has extensively studied Agent Orange use in Asia, Buczkowski said. Young told South Korea&rsquo;s Yonhap News on Monday that he does not believe Agent Orange was buried at the base.

A 1992 study showed that &ldquo;a large number&rdquo; of pesticides, herbicides and other chemicals were buried at Carroll in 1978 but were removed in 1979 and 1980 along with 40 to 60 tons of soil, according to the 8th Army. Officials have no records showing where those chemicals were moved or the entirety of the chemicals that were buried there.

Retired Sgt. 1st Class John Sipkens, who tested those chemicals in 1979, told Stars and Stripes last week that he saw no evidence of Agent Orange, including the barrels typically used to store the defoliant, at the dig site.

In 2004, the U.S. military found trace levels of dioxin, a component of Agent Orange, in one of 13 bore holes drilled at the site, but said those levels were too low to be hazardous to human health. A ground-penetrating radar found nothing underground.

South Korea&rsquo;s decision to conduct the environmental survey of former U.S. bases was prompted by a statement by retired Master Sgt. Ray Bows, posted in May 2004 on the Korean War Project website, that said hundreds of gallons of chemicals were buried in the 1960s at Camp Mercer.