On a submarine, ordinary activities are anything but routine 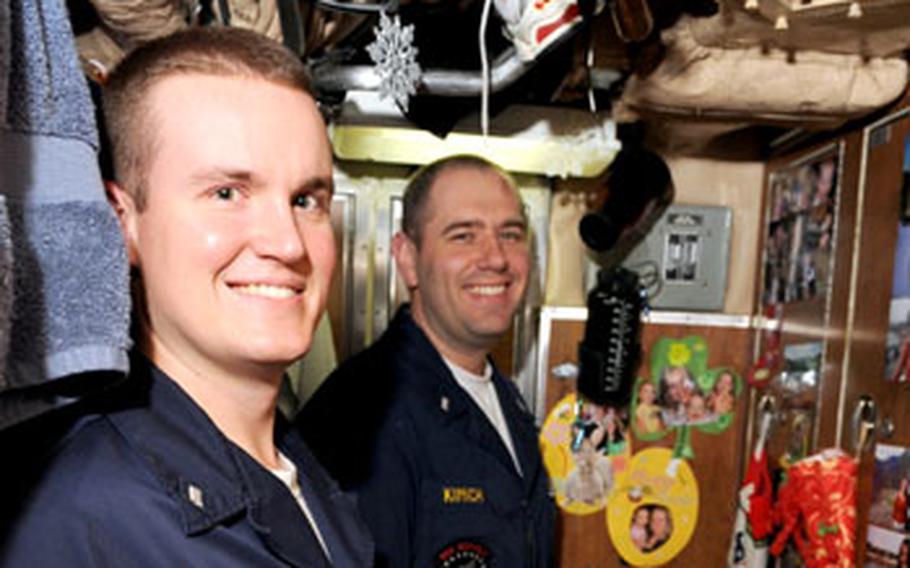 Lt. j.g. Will Fowler, left, Lt. j.g. Gabriel Kimich, right, and one more junior officer share a stateroom aboard the USS Seawolf. Kimich says he considers himself lucky to be able to get some privacy when his roommates are working. When Kimich first arrived, he slept in an 18-man berth. (Erik Slavin / Stars and Stripes)

How do they breathe? They can either get air when they surface, or they can make their own.

The Seawolf captures large volumes of seawater and desalinates it. Some of the freshwater can be put to personal use. Otherwise, the H2O can also be separated into hydrogen and oxygen through electrolysis, says Petty Officer 2nd Class Lucas Albert of Paul, Idaho. The oxygen is filtered and either circulated for breathing or sent to reserve tanks. 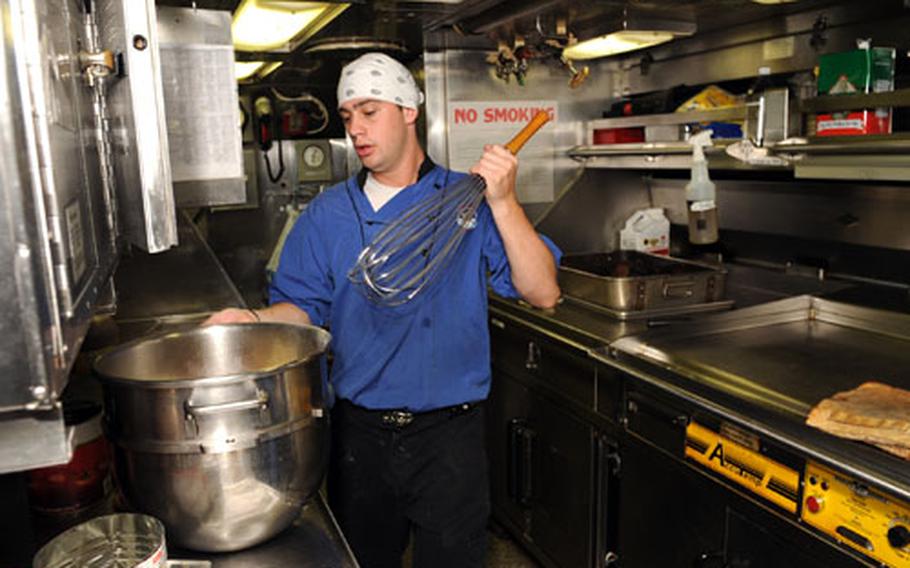 Seaman Timmy Stracner makes mashed potatoes with bacon bits in the galley for the crew of the USS Seawolf. Submarines get larger food budgets than their surface counterparts, and the food is always prepared right before being served. (Erik Slavin / Stars and Stripes)

How’s the food? Pretty good, especially compared to some of their less fortunate surface brethren.

Submarine cooks have a little more incentive to prepare a good meal. On a large surface ship, cooks can hang out with each other amid thousands of anonymous faces. If the meal is bad on a submarine, there is nowhere to hide.

“Good food, which is the base of [good] morale, is my job,” said Seaman Apprentice Timmy Stracner, 23, of DeRidder, La.

Better food is one of the touted perks of volunteering for submarine duty. The food budget is bigger, the portions are unlimited and none of it sits under heat lamps. Entrees including short ribs, roast beef and shrimp get served with potatoes, salad and soups daily. There are some drink fountains and a soft-serve ice cream machine. 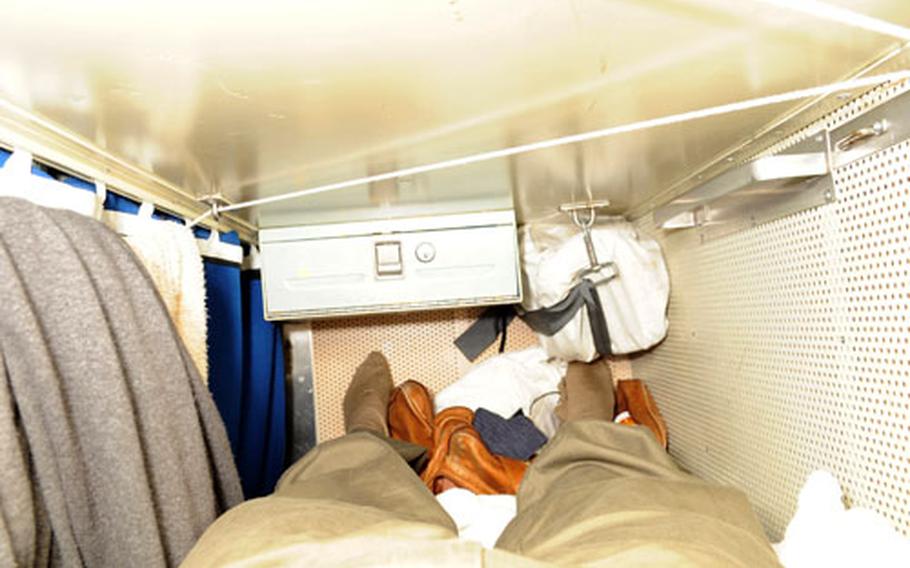 The racks in the 38-man berth are just long enough to accommodate an American male of average height, and no more. With space at a premium, sailors also find ways to hang their clothes, towels and possessions inside their rack. (Erik Slavin / Stars and Stripes) 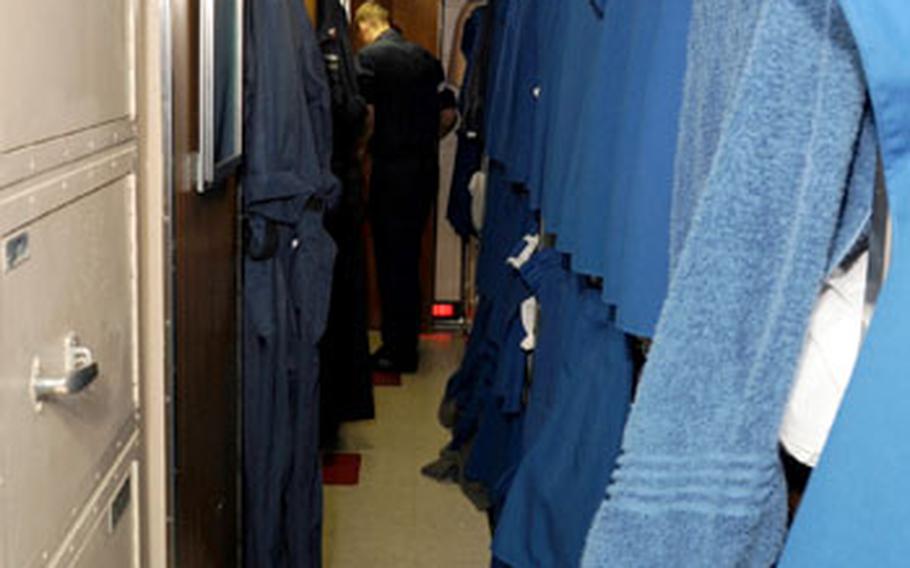 Sailors hang their towels over their curtains to get semi-dry in the 38-man berth, shown here. Bunk beds, or racks, are stacked in threes. The lights normally remain off, except during cleaning and during emergencies or drills. (Erik Slavin / Stars and Stripes)

How do they sleep? Stiff as a board, unless they’re pretty tiny.

Most enlisted sailors sleep in either the 38-man or 18-man berths, while the torpedomen sleep right next to their weapons.

The chiefs and some of the first class petty officers have separate berthing rooms.

The bunk beds, or “racks” in Navyspeak, are six feet long, about half as wide and have about a foot of clearance over the average person’s forehead.

Alas, there are 150 sailors aboard, but less than 150 beds. Some junior sailors must “hotrack,” meaning three sailors share two racks. 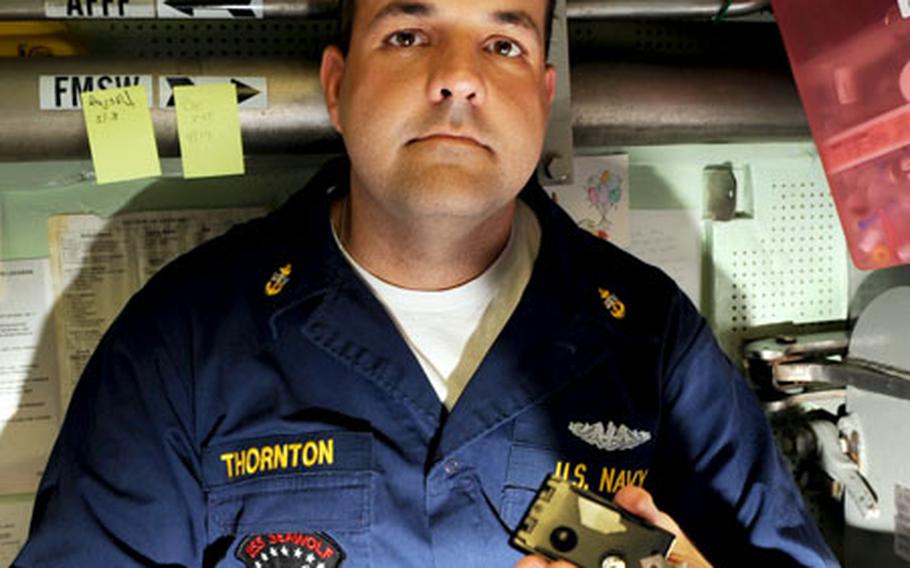 Chief Petty Officer and USS Seawolf medic John Thornton displays a dosimeter, which every sailor aboard wears to monitor radiation exposure. While dosimeters protect health, their readings are also highly documented to protect the Navy against potential medical lawsuits. Most submariners receive over the course of their careers the same amount of radiation exposure that transatlantic flight passengers would be exposed to, Thornton said. (Erik Slavin / Stars and Stripes)

What happens when someone gets sick? The first stop on the Seawolf is “Doc,” corpsman and Chief Petty Officer John Thornton of North East, Pa.

Thornton’s training includes the Navy’s schooling and rotations in the emergency room at civilian hospitals.

Thornton doesn’t have an exam table and all the niceties of a clinic, but he says he makes do. He can use the wardroom, where officers normally eat, during emergencies.