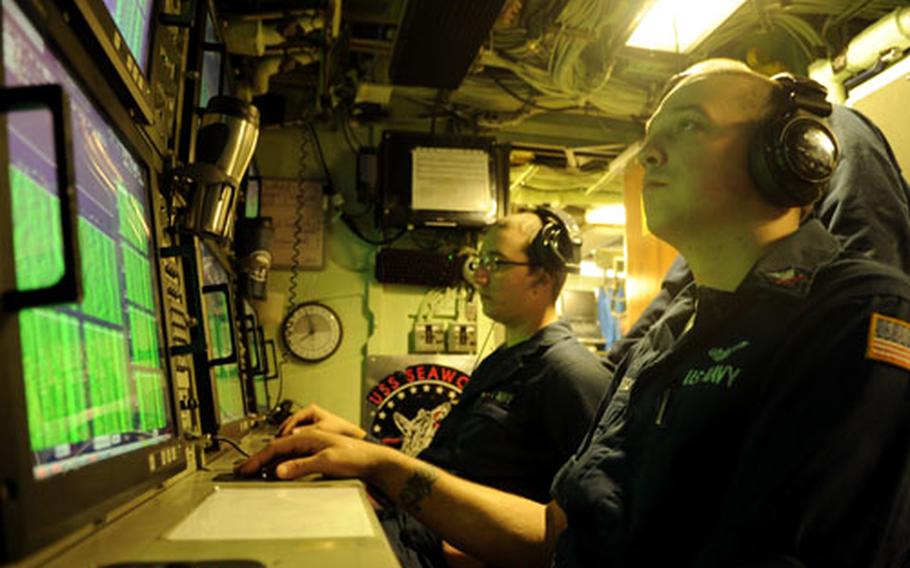 A submarine lives and dies by noise.

A sign that reads “silence is victory” hangs on a shower door as a reminder that anything loud could give away the submarine’s position to a well-trained enemy ear. When two evenly matched submarines are stalking each other, the outcome could hinge on which crew’s sonar technicians are first to hear the turn of a screw, or maybe even a slamming shower door.

“We are the first to ‘see’ the enemy,” said Petty Officer 1st Class John Rooney of Houston. “Then it’s up to tactical positioning and operator skill.

“The Seawolf uses passive sonar displays that look like “The Matrix” and the original Nintendo enrolled in an abstract art class together.

Most of the Seawolf’s sonar technicians didn’t have their job in mind when they went to submarine school. But each said they’ve grown to like what they see as both science and art.

“It’s very challenging, learning how sound propagates in the ocean,” Rooney said. “Knowing the types of sounds and what to listen for takes skill.” 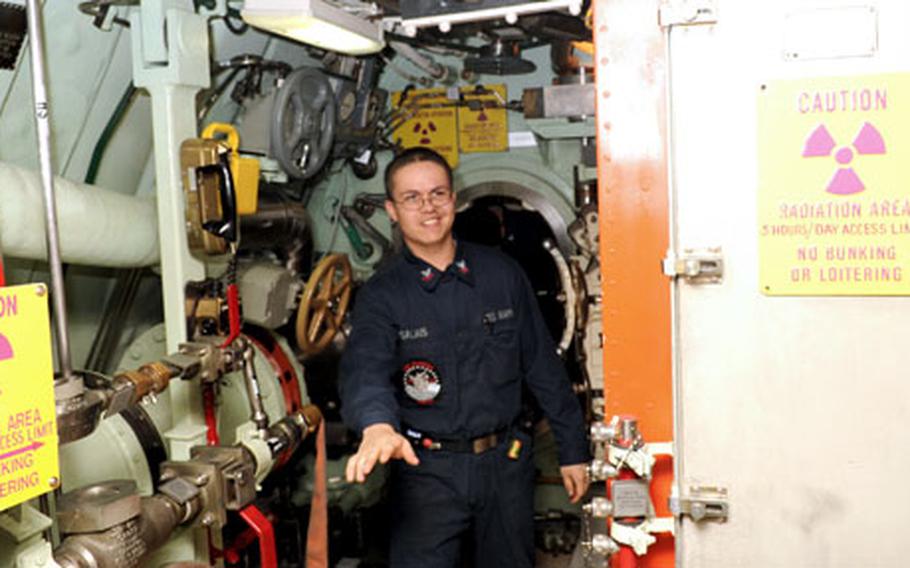 A sailor walks out of the aft part of the USS Seawolf, where the engine room and the nuclear reactor are located. The aft half of the boat is off-limits to most visitors. (Erik Slavin / S&S) 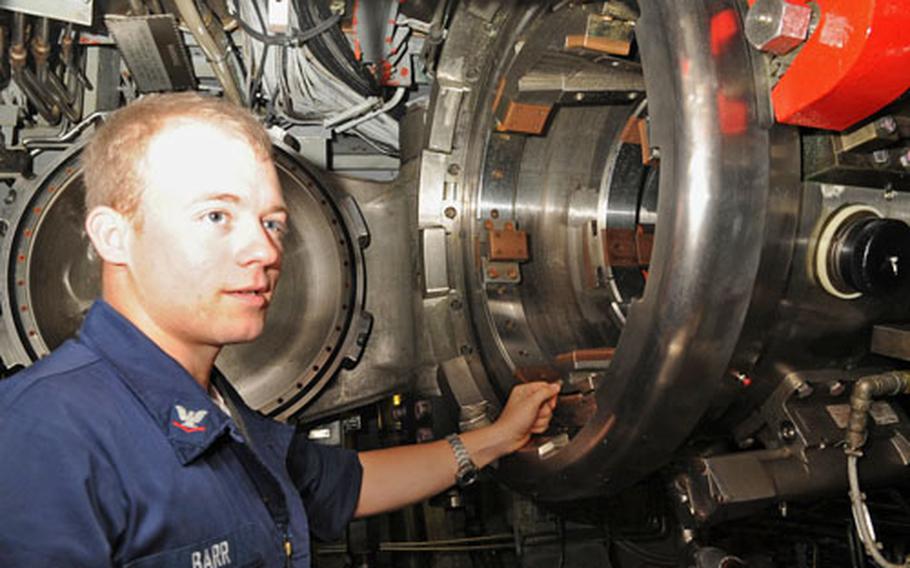 The concept is simple: the nuclear reactor turns water into steam; the heat energy then powers the turbines for propulsion and for generating electricity.

The details of how it all works are more complex, to the point where experienced “nukes,” as the technicians are known, are one of the Navy’s highest retention priorities.

Donovan is leaving the Navy soon and likely headed for a high-paying job in the civilian nuclear industry.

To keep others from following his lead, the Navy was offering sailors in nuclear technician jobs up to $90,000 to re-enlist before it met its retention goal earlier this year. While that figure is higher than most Navy re-enlistment bonuses, it’s a fraction of what it costs to train a nuke.

Nuclear technicians say the job is stressful at times, but they try to repress any thoughts of the immense power they’re controlling.

“We’re in a metal tube and there’s an operating reactor with very, very high-pressure liquid and steam,” said Petty Officer 1st Class Seth Powers, 29, of Lancaster, Pa. “If it wasn’t controlled the way it is and the procedures weren’t in place, and we didn’t train the way we do, it could be very dangerous. It’s always going to be inherently dangerous, but we don’t fear it.” 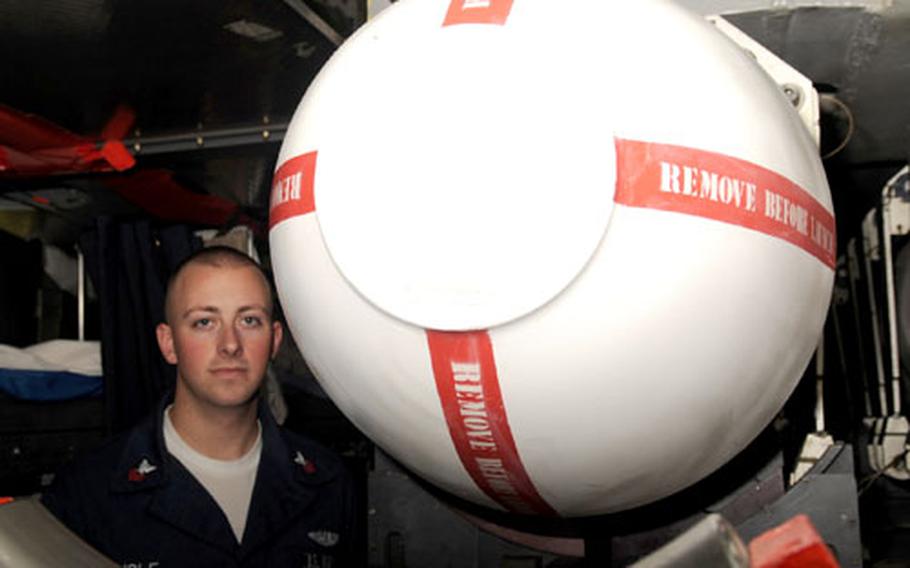 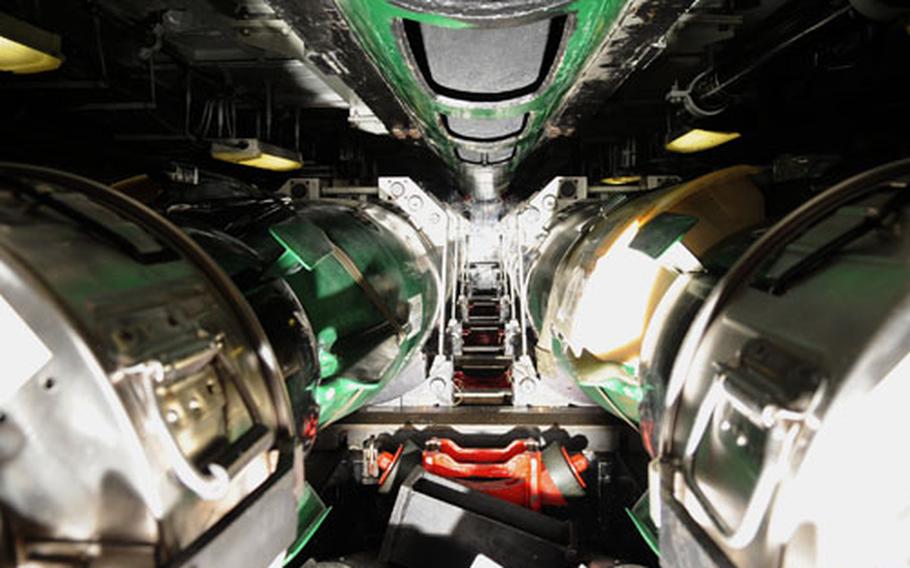 The USS Seawolf’s MK-48 torpedoes lie ready on the torpedo room during the submarine’s Western Pacific deployment in May. (Erik Slavin / S&S)

Most things in a torpedoman’s life aboard the USS Seawolf revolve around his weapons.

His bed lies beside the Tomahawk missiles; his chin-up bar is suspended above the Mark 48 torpedoes.

He hangs out and listens to an iPod next to the titanium-alloy launch tubes.

The torpedo room is a little more spacious than most other parts of the otherwise jam-packed boat. It has to be; the fast-attack Seawolf has eight torpedo tubes, twice as many as the larger, nuclear-missile-carrying Trident submarines.

The Seawolf class was designed at the height of the Cold War with the intent to create a submarine that could take out an entire Soviet battle group of surface and undersea weaponry.

The 19-foot torpedoes weigh thousands of pounds. Seawolf torpedomen use a touch-screen display to handle the massive weapons, though mechanical skill is also needed to keep the torpedoes moving from rack to tube.

The boat’s Tomahawk cruise missiles can be launched out of the same torpedo tubes, as could mines if they were loaded on the boat.

“This is probably the most advanced torpedo room in the world,” said Petty Officer 1st Class Andrew Lisle, 23, of Salem, Ore. “I don’t know of any boat that can shoot so many, so quickly and so quietly.”