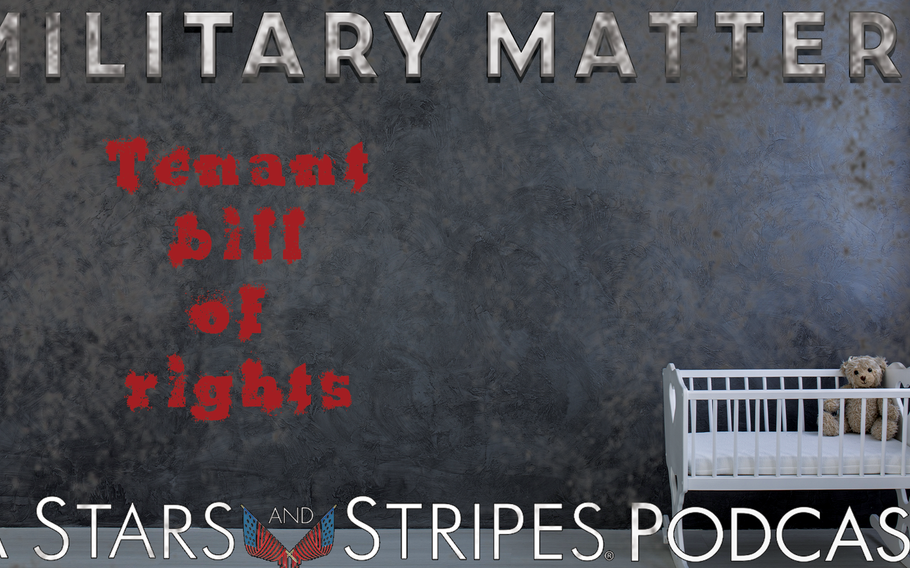 Is the tenant bill of rights that is supposed to help protect families in military housing more rhetoric than regulation?

That is the belief of Sarah Kline, who works with the Military Housing Advocacy Network, and Leigh Tuttle, the wife of a U.S. Army Special Forces soldier who has seen up close how corners can get cut with something as simple as replacing a carpet.

In Part 2 of Military Matters' look at the problems with military housing, co-hosts Rod Rodriguez and Jack Murphy discuss the issues with two military spouses who have been in the middle of the fight.

"I think Congress was initially really motivated to enact legislation and mandate the tenant bill of rights," says Kline, but they discovered that it's not going to be easy. "They are being told by the DOD that they don't have the power to do so, that these are all in the contract legal agreements that, not only the military housing company, but their lender has to approve in order to enact this legislation. So the argument is if this agreement or contract is now against current law, must they change it? And the DOD I think is essentially saying, well, we can't make them, we're sorry Congress."

At one home, Tuttle needed to get her carpet replaced.

"When they were pulling it off, even the carpeting pad had mold, and the contractor who was there and was like, well, we're not allowed to replace the padding," Tuttle says.

Not replacing the padding may have saved a few bucks, but it did not fix the underlying problem. And there is a lot more than money at stake.

"From 2007 to 2011 there were 12 infant deaths in homes on Fort Bragg," Tuttle says. "And three of those infants were from three separate families within the same home."

The Army investigated and concluded the homes were safe and that contaminated drywall was not to blame. But experts who reviewed the report said the tests were "unreliable and incomplete."

In a 2011 ProPublica article, David Abramson, a professor at Columbia University's Mailman school of public, said the number of infant deaths in the same home was enormously unlikely. And that "common sense would dictate there's something common in the environmental exposure."

The problem is known. The DOD knows, Congress knows. What are the next steps?

Kline: "Without those agreements being rewritten and rescinded, I don't know that there's any hope for military families to really live in a safe home and not be abused by their landlord."

Tuttle: "I think it's just going to take the American public to really see the bigger picture of how this is affecting the health of the service members and their families, but also readiness, right?"