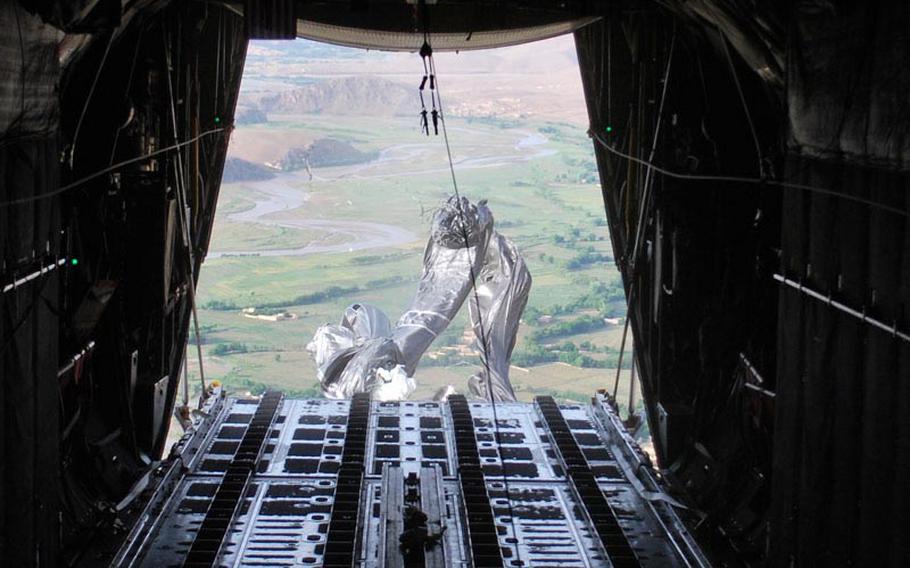 Parachutes unfurl 1,000 feet above Afghanistan's Khod Valley as supply bundles fall from the cargo door of a C-130. The Air Force airdrop mission north of Kandahar last month restocked a remote Army base with food, water and ammunition. (Mauri Slater/Courtesy of the U.S. Air Force)

Parachutes unfurl 1,000 feet above Afghanistan's Khod Valley as supply bundles fall from the cargo door of a C-130. The Air Force airdrop mission north of Kandahar last month restocked a remote Army base with food, water and ammunition. (Mauri Slater/Courtesy of the U.S. Air Force) 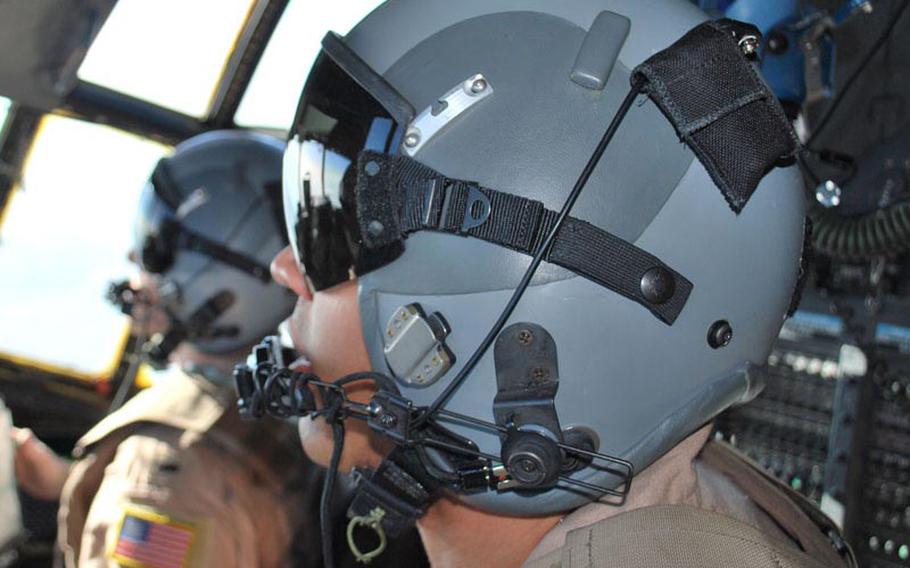 Air Force Tech. Sgt. Craig Neeley, flight engineer for a May 17 airdrop mission to resupply an Army forward operating base, scans the terrain below as his C-130 cargo plane flies north toward Bagram Air Field, Afghanistan, after the drop. (Mauri Slater/Courtesy of the U.S. Air Force) 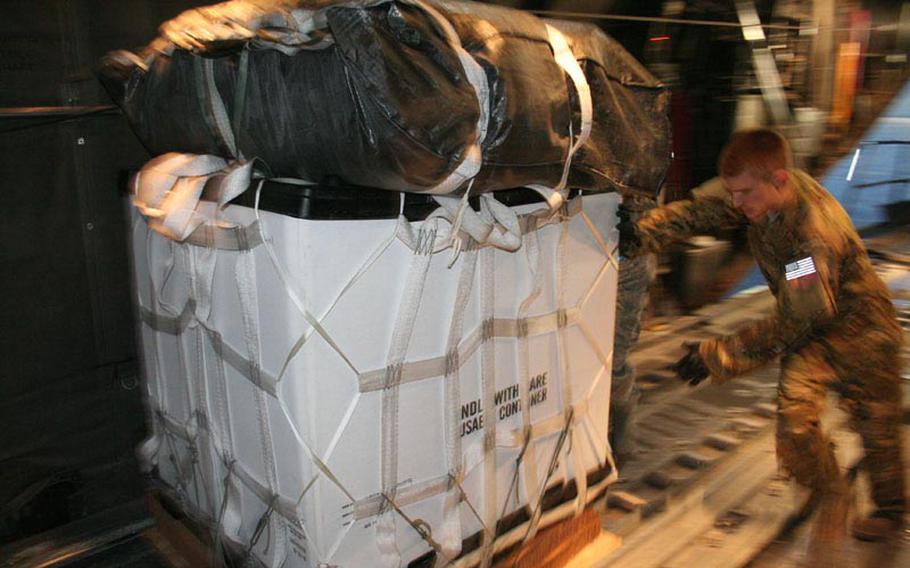 Senior Airman Steven Van Epps rolls a 1,400-pound supply bundle fitted with a parachute into the cargo bay of a C-130 at Bagram Air Field before a May 17 airdrop resupply mission. (Chris Carroll/Stars and Stripes) 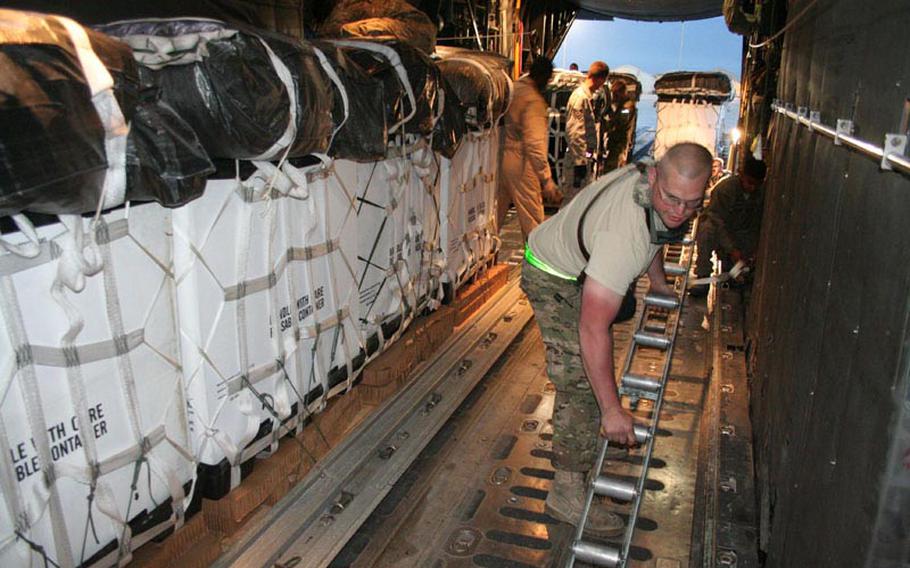 Senior Airman Phillip Underwood replaces a broken roller in the cargo bay of a C-130 while the plane waits before dawn to take off on an airdrop resupply mission. Gravity will pull the white cargo bundles fitted with parachutes out of the back of the plane when the pilot goes into a climb above a remote drop zone where soldiers will be waiting. (Chris Carroll/Stars and Stripes) 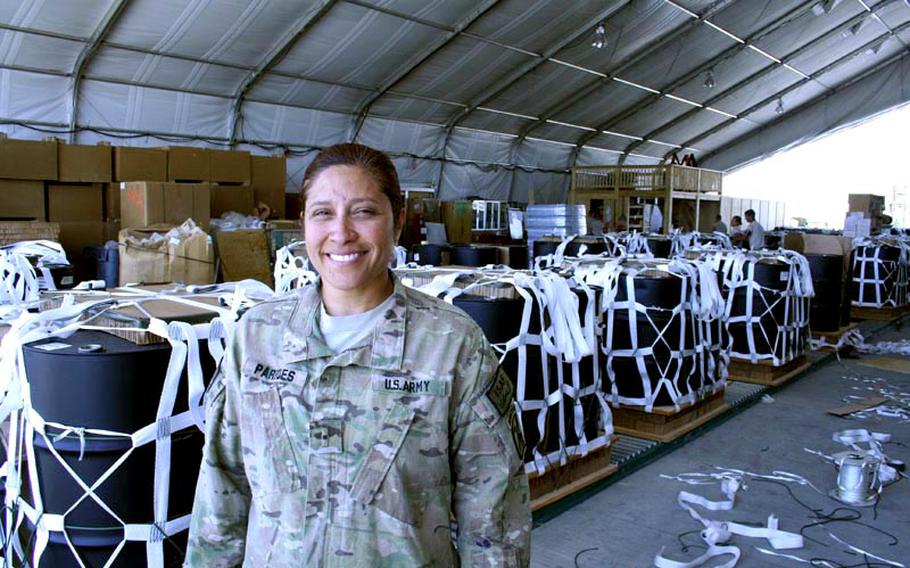 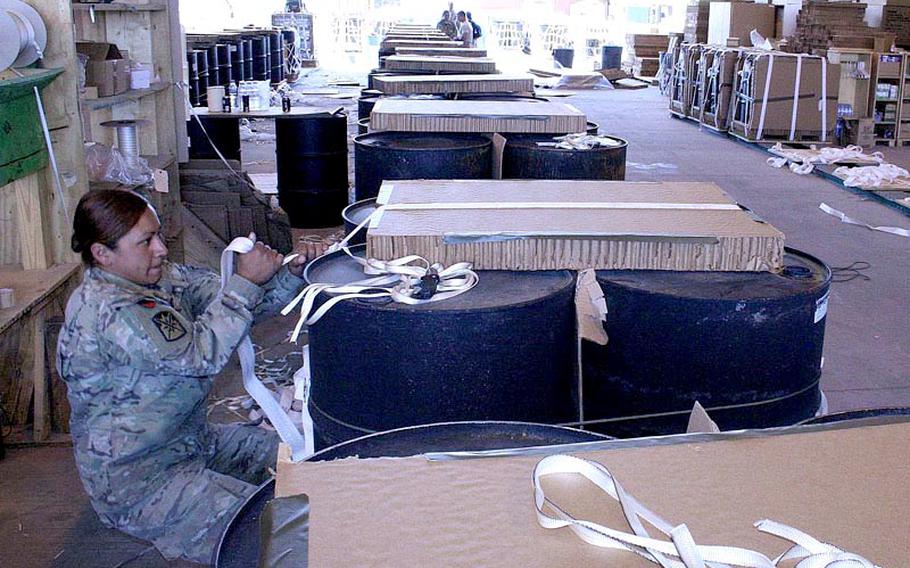 At an Army rigging facility at Bagram Air Field, Spc. Marcella Flores cinches down the webbing that will hold a pallet of jet fuel together as it parachutes down to soldiers who'll use it for heating and cooking at a small base in the mountains of Afghanistan. (Chris Carroll/Stars and Stripes)

BAGRAM AIR FIELD, Afghanistan &mdash; Flying hundreds of feet above a river valley in south-central Afghanistan that lay among the arid mountains like a green ribbon, Capt. Micah Chollar pulled the nose of his C-130 Hercules suddenly skyward. The plane&rsquo;s open rear cargo door now looked steeply down into the farm fields and residential compounds below.

Somewhere down there, U.S. Army soldiers were waiting.

At a precise moment, acting on a signal from the plane&rsquo;s navigator, Tech. Sgt. Quincy Jason Lewis pulled violently down on a steel cable attached to a razor knife at the rear of the plane. It sliced through a heavy nylon strap that held in place 16 pallets, each holding well over 1,000 pounds of food, water, ammunition &mdash; basic necessities without which the war in Afghanistan would grind immediately to a halt.

Pulled by gravity, the bundles rumbled out the back of the climbing aircraft, and static lines popped the large black parachutes attached to each. It would take each pallet about half a minute to touch down 1,000 feet below, delivering supplies to soldiers at a remote base in Regional Command-South who have few other delivery options. By that time, the plane, which had lost nearly one-fifth of its takeoff weight in three seconds, was on its way back to Bagram Air Field, about an hour&rsquo;s flight northwest.

That method of resupply, known as airdrop, has been in use for decades but out of necessity has risen to a new level of prominence in Afghanistan.

&ldquo;We&rsquo;ve always had this capability, but in this war, with the difficult terrain in Afghanistan and the [security] environment, the military has been forced to rely on it more than ever before,&rdquo; said Chief Warrant Officer 5 Joe Jimenez, the U.S. Army&rsquo;s top expert on the mechanics of airdrops. As command airdrop adviser at the Army Quartermaster School, he oversees development of the techniques the Army uses for rigging the bundles dropped by the Air Force.

Airdrop frequency has exploded since the 2009 troop surge, rising from 814 separate Air Force missions in 2008 to 2,552 last year that dropped a total of 80 million pounds of supplies, according to U.S. Central Command&rsquo;s Combined Air and Space Operations Center. (Contractor missions to supply small special operations teams, which began last fall and are not included in the data, push the numbers slightly higher.) Even though remaining U.S. surge troops are scheduled to finish pulling out of the country late this year, officials at Air Mobility Command, or AMC, which oversees cargo missions worldwide, project the number of airdrops to hold steady or even rise marginally in 2012.

In order to maintain combat power to battle insurgents in the final years of the war, the U.S. military will trim support troops as much as possible while maintaining the presence of &ldquo;the shooters, the ones that are engaging,&rdquo; Air Force Gen. Raymond Johns, AMC commander, said recently in an interview with Air Force Magazine.

As a result, Johns said, combat troops and trainers dispersed through the country will &ldquo;become more dependent on airdrop because there will be less support structure in place.&rdquo;

Security concerns stemming from sparser concentrations of NATO troops in the increasing number of areas placed under Afghan control, as well as the new strategy of embedding small groups of American advisers and trainers with Afghan units around the country, could keep the demand for airdrops strong.

Apart from the strategic implications, more airdrops would be fine with many of the airmen who actually fly the missions, which can be thrill rides requiring expert maneuvers in tight, mountainous terrain.

&ldquo;Airdrops are the fun part of our job,&rdquo; said Capt. Mike Slaughter, who flew on the mission to RC-South as an adviser to Chollar&rsquo;s crew, which had just deployed to Afghanistan and never conducted an airdrop there before. Compared with landing at larger FOBs with a runway and offloading cargo, &ldquo;This is a challenge. You want to get it just right so the guys on the ground don&rsquo;t have to scramble all over to pick it up.&rdquo;

For an airdrop to come together correctly, the plane has to be properly positioned at the right altitude, angle and airspeed, he said. The moment of release has to be precisely timed.

&ldquo;We&rsquo;re moving about 88 yards a second, so if you&rsquo;re a few seconds off and slightly out of position, it can be a problem&rdquo; because bundles might land in inaccessible terrain or in areas where ground troops are exposed to enemy fire.

The Army and Air Force combine to mount several different types of airdrop missions depending on the situation, Jimenez said. The mission to RC-South was the most common type by far, known as a &ldquo;low-cost, low-velocity&rdquo; airdrop using a big disposable parachute and a plastic container which together cost less than $3,000.

Because the aircraft flies relatively low and slow, a perfectly executed drop can land in an area the size of a football field. But it&rsquo;s best reserved for areas with low risk of ground fire. According to Army data, more than 22 million pounds of supplies were dropped by this method in the first four months of 2012, Jimenez said.

In more dangerous areas, it&rsquo;s possible to drop supplies from a higher altitude with smaller chutes, but the containers will be spread over a larger area, putting ground troops at more risk.

The most technologically advanced technique &mdash; the Joint Precision Airdrop System, or JPADS &mdash; uses a GPS-guided steering system to precisely fly bundles dropped from high altitude into an outpost. It is significantly more expensive and complex, and used in a tiny percentage of drops.

Supplies can also be put precisely on target with another method called a &ldquo;low-cost, low-altitude&rdquo; airdrop. Bundles dropped from as low as 150 feet can land within 25 yards of a target, twice as accurate as a typical airdrop done perfectly. An undisclosed contractor flying the 1960s-era Caribou cargo planes began dropping such bundles to special operations units last year, but the Air Force says it is now taking over the mission itself. Jimenez said such missions accounted for just more than 1 million pounds of supplies in the first four months of 2012.

The Air Force&rsquo;s budget-driven announcement this year that it would cut the new C-27J cargo hauler, smaller than a C-130 and well-suited for low-altitude drops, caused friction with the Army, which considered the plane necessary to support soldiers in remote locations. The Air Force maintains it is doing the job with C-130.

Whatever type of drop Army logisticians choose, getting cargo to the ground safely and on target is the key, said Warrant Officer 1 Viviana Paredes, who oversees bundle rigging techniques used at the Army rigging facility at Bagram.

When she can slip away, she likes to catch a helicopter ride to an isolated FOB to watch the bundles come down. Did the cardboard padding material shield the contents of the bundle from breakage? Did the netting hold everything together? Were things protected a little too well &mdash; meaning a greater volume of cargo could be dropped?

When there&rsquo;s a little extra room in a food crate during the heat of summer, Paredes said, she and her crew like to slip ice cream and refrigerant into the crates for soldiers doing the dangerous, dirty work of fighting the war in remote outposts.

&ldquo;We want to bring them a little bit of home out in a really difficult place,&rdquo; she said. &ldquo;[In] our job here, we don&rsquo;t get much attention except when something goes wrong. But we know we&rsquo;re really here for them.&rdquo;

After touching down back at Bagram after the Mission to RC-South, Chollar went back to the cargo bay to discuss the mechanics of his first airdrop in Afghanistan &mdash; timing, angles, speed, a whole high-speed airborne calculus &mdash; with loadmaster Lewis.

&ldquo;It was a good drop,&rdquo; he said. &ldquo;You can always do better. We want it to be perfect.&rdquo;