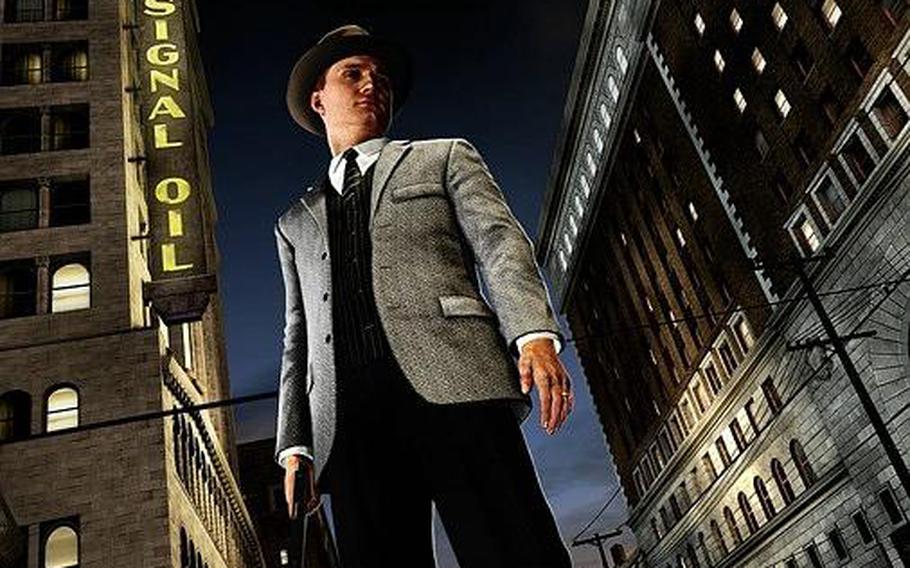 In 'L.A. Noire,' you play as Cole Phelps, a detective for the Los Angeles Police Department and a Marine veteran of Okinawa. (Games Press)

In 'L.A. Noire,' you play as Cole Phelps, a detective for the Los Angeles Police Department and a Marine veteran of Okinawa. (Games Press) Cole Phelps, center, gets an assignment to investigate a murder in 'L.A. Noire.' (Games Press) 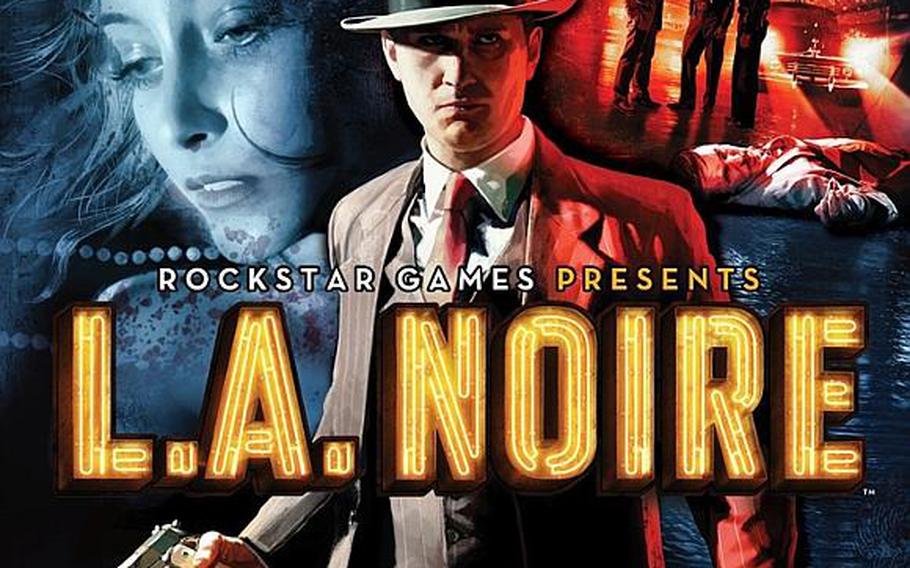 Rockstar Games has gone straight. The company best known for the “Grand Theft Auto” crime franchise lets you put on a badge and see how the other side lives in “L.A. Noire.”

The M-rated game is set just after World War II and lets you play as Cole Phelps, a Marine veteran who was awarded the Silver Star for actions on Okinawa. You start as a beat cop on the Los Angeles Police Department — time that serves as a tutorial — but quickly move up to detective because of your good investigative instincts.

Of course, LA has no shortage of street crime, homicides and corruption that you’ll need to probe during the primary story line and numerous side missions. As a result, the game feels a lot like a combination of “Grand Theft Auto” — also by Rockstar — and “Heavy Rain” — a terrific mystery game that was available only on the PlayStation 3.

In most cases, you’ll receive an assignment from your superiors or respond to a call for assistance. The cases range from simple street crimes to complex murder investigations. The major cases are enthralling, though sometimes quite disturbing. Combined, they deliver an intense view of crime in the big city.

Street crime cases usually end pretty quickly as you run down a perpetrator and either arrest or shoot him. The running mechanics are very good, allowing you to leap obstacles or climb ladders or drains with ease. Shooting is also easy — press the left trigger to enter the aiming view and right trigger to shoot. However, being trigger happy can have consequences in some cases. You’ll occasionally need to rely on your fists. Fighting is pretty easy — one button for punching, on for grabbing and one for blocking — and can be a lot of fun.

More complex cases require more involved investigative techniques. When you arrive on a crime scene, you’ll need to scan the area for evidence and interview witnesses.

When you walk near evidence, your controller will vibrate and you can move in for a closer look. Anything of interest is recorded in your notebook, which can easily be reviewed later. If you think additional clues are available but can’t find them, you can reveal them by spending an “intuition point” that you’ve earned from solving previous cases.

When questioning witnesses, you’ll need to check their responses against the evidence you’ve gathered. They might be lying. As the interrogation progresses, you’ll be offered the choice of confronting a witness about falsehoods. However, if you accuse someone of lying and they’re telling the truth, they’ll refuse to answer additional questions, which can shut down that avenue of investigation. If you’re stumped, you can spend an intuition point to narrow the options for questioning and keep the interrogation going.

If you ever need assistance, you can ask your partner for advice on the best course of action. This is especially handy during the many driving sequences because the map isn’t always terribly helpful. It’s like having a human GPS in your car.

Driving can get a bit tedious. Although the controls are very good, Los Angeles is very big and you spend a huge amount of time driving to crime scenes and to interview witnesses. Since there’s not much to do when driving — unless you’re eager to become a menace to society — you might start wishing Los Angeles were smaller. The good part about driving is that you can commandeer any vehicle on the streets. If you decide to try a trash truck or sports car, it can make the commute a little more interesting.

When you’re cruising LA’s streets remember that you’re a cop and not a criminal in this Rockstar game. The sort of stuff you’d pull in “Grand Theft Auto” doesn’t fly when you have a badge.

The graphics are pretty good. The facial expressions are incredibly lifelike. However, the other character animations are often a bit stiff. The settings are also filled with detail and texture that make postwar Los Angeles come alive.

The game earns its M rating primarily because some of the crimes are sexual in nature and some victims are found nude. A few colorful phrases add to the mix.

Bottom line: It’s great to see Rockstar deliver a game about law enforcement as meaty and entertaining as its games about law-breaking.