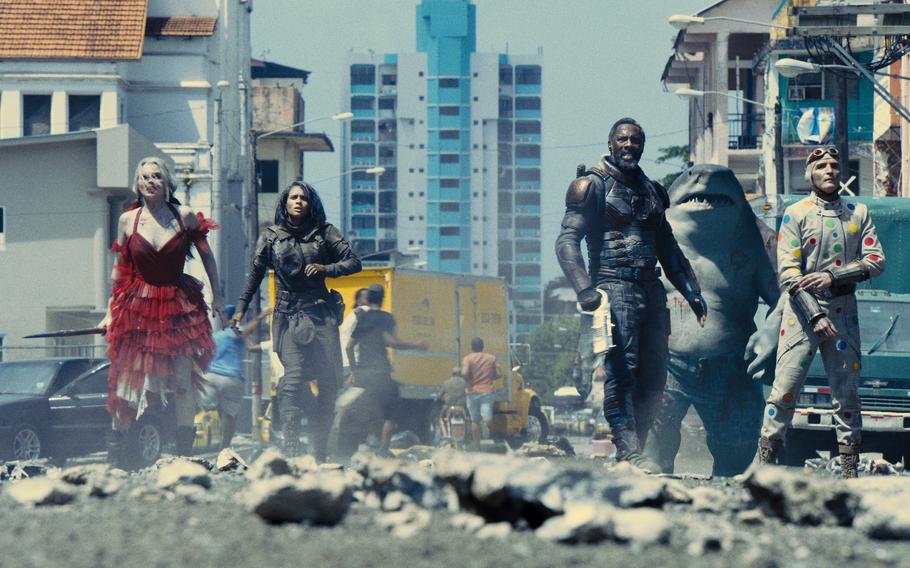 There’s a lesson to be learned from “The Suicide Squad,” a movie otherwise blissfully devoid of lessons. Emerging from this scuzzy cinematic joy-bomb from the DC Extended Universe, I found myself marveling — ahem, wondering — at how you can in fact take one of the worst movies of its kind, jettison most of the key players, jack up the violence to R-rated levels, add a definite article to the title, throw in a giant extraterrestrial starfish and wind up with something that, if not a masterpiece, certainly feels like one by comparison. After 2016’s ugly, bludgeoning “Suicide Squad,” I couldn’t imagine liking — and could barely stomach the idea of seeing — another movie called “Suicide Squad.” I’m delighted to be proven wrong.

And maybe more delighted than surprised. Less a sequel than a do-over, “The Suicide Squad” is the latest film written and directed by James Gunn, crossing over to the DC side of the superhero cosmos after having churned out two “Guardians of the Galaxy” movies for Marvel. Those pictures, with their trippy colors, surreal misadventures and goofy intergalactic misfits, turned out to be a useful warm-up for a story about a much more unruly and murderous band of outsiders. Or perhaps I should say insiders, since most of them — like the ironically named Peacemaker (John Cena), the less ironically named Bloodsport (Idris Elba) and the always cheerfully deranged Harley Quinn (Margot Robbie) — are behind bars when they’re coerced into joining a top-secret U.S. government operation so dangerous that only the worst of humanity need apply.

That fight-evil-with-evil strategy is a holdover from the earlier movie, though the final makeup of this movie’s Task Force X is a bit of a mystery at first, thanks to a gleefully overstuffed red herring of a prologue. Without divulging too much, I’ll just note that Gunn’s use of misdirection is the kind of sly joke that cuts to the heart of this movie’s flippant, borderline-obnoxious charm. In a film about a bunch of ultra-violent super-baddies, it’s only right that some of them should be treated as genuinely expendable.

And speaking of expendable: Yes, those are Sylvester Stallone’s grunts emanating from the jaws of King Shark (played by Steve Agee), an enormous human-selachimorphan hybrid who proves a crucial addition to the task force. The likelihood that he’ll chomp down on his comrades is one of those pesky logistical hurdles the movie breezily kicks aside as it rounds up its dirty not-quite dozen, starting with a (relatively) level-headed leader, Col. Rick Flag (Joel Kinnaman, making more of an impression than in the first “Squad”). There’s also a soulful rodent whisperer named Ratcatcher II (a luminous Daniela Melchior) and a walking Twister board named Polka-Dot Man (David Dastmalchian), who kills people by pelting them with tiny, bright-colored explosives. (Gunn apparently found this character by Googling “who is the dumbest supervillain of all time”; as played by Dastmalchian, he’s now one of the most bizarrely memorable.)

Polka-Dot Man’s particular gifts are the result of a medical experiment gone horribly wrong, which makes him a fitting choice for this particular mission. The team’s destination is the South American island nation of Corto Maltese, where they must take down a modern-day Mengele figure (Peter Capaldi) who’s carrying out some hideous, potentially world-threatening human experiments involving the aforementioned alien starfish. They’ll also have to join forces with a brave rebel insurgency (led by Alice Braga) in order to take down the island’s staunchly anti-American government. Mostly, they’ll have to grapple with their own team dynamics, which — thanks to a terrific ensemble and a deft balance of brains, heart and other viscera — turn out to be rather more involving than expected.

Psychotic, battle-weary and devoid of compassion as they may be, these merry professional killers aren’t entirely dead inside. By the same token, Gunn’s insouciant swagger isn’t entirely devoid of warmth or sentimentality, and the bonds of kinship that emerge between comrades — warm little cracks in the movie’s nihilistic facade — can’t help but sneak their way into your own affections. So do the characters who mostly stand alone, like Elba’s unassailably cool Bloodshot and, of course, Robbie’s irrepressible Harley Quinn, last seen kicking ass in her own standalone feature, “Birds of Prey.” Here she spearheads some of the movie’s most dazzling action highlights, cracking necks in a scarlet flamenco dress and at one point unleashing geysers of cartoon flowers from her victims’ fatal wounds.

And that’s scarcely the most outlandish visual touch in a movie whose every brilliantly hued, strikingly warped image — the work of production designer Beth Mickle and cinematographer Henry Braham, among others — feels like a high-gloss throwback to Gunn’s early days churning out low-budget schlock for Troma Entertainment. The Troma influence looms large over “The Suicide Squad,” which is, among other things, a riot of exploding heads, hacked-off heads and heads with multicolored protuberances. It also has bulging biceps, swinging genitalia, magically detachable limbs, beautifully designed intertitles, graphic closeups of internal organs, daddy-daughter issues galore and one psychedelic interlude, set inside a giant eyeball, that proves Gunn hasn’t lost his sense of (aqueous) humor. At a certain point, not unlike Amanda Waller, the ruthless U.S. government taskmaster played (again) by an impossibly cold-blooded Viola Davis, you might want to push a button that would force everyone and everything to fall in line, to bring this proudly unwieldy undertaking under control.

Gunn, to his credit, doesn’t seem terribly interested in redemption for himself or for his characters, who turn out not to be the worst people on screen by a long shot. Tellingly, one of the targets that “The Suicide Squad” consistently jabs at is an idea of America itself, a nation with a long history of fomenting violence in other nations and refusing to acknowledge its complicity in human suffering. Maybe that’s an obvious, tired point, an attempt to bring some seriousness to a movie featuring a really, really big intergalactic starfish. Or maybe there’s still another lesson here, namely that a sincere effort to fight evil with evil would, for more than a few people, begin with an honest look in the mirror.