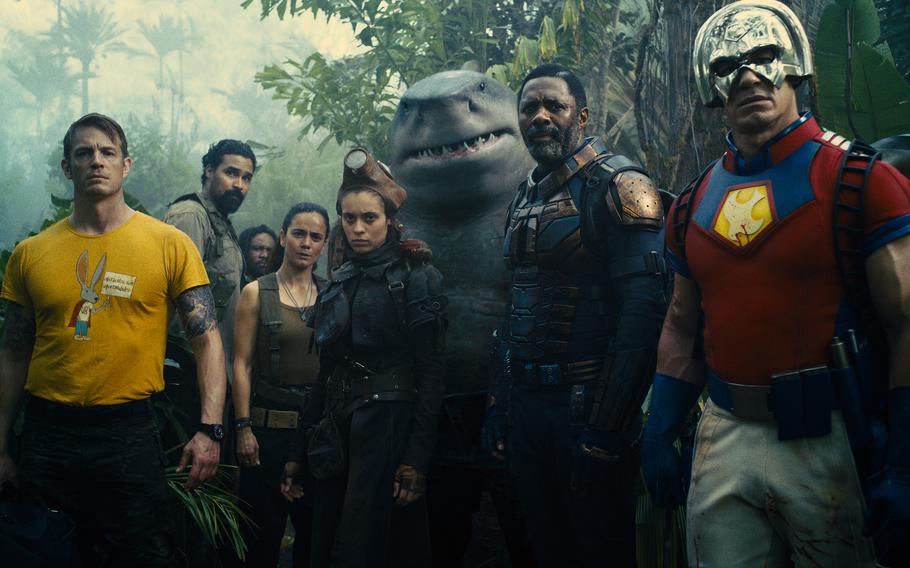 Could a scoundrel DC Comics character like Peacemaker ever be on the same level as Superman? How about Polka-Dot Man? Or Ratcatcher?

The man who made Rocket Raccoon, Groot and Star-Lord household names thinks so. James Gunn can’t help it: He loves an outsider. It’s the reason why when offered the chance to make a movie with any DC character he wanted, he chose not Superman but the misfits of “The Suicide Squad.”

Nevermind that there was a terribly reviewed “Suicide Squad” movie released just five years ago. Gunn, a lifelong fan of the good-for-nothing supervillains, had his own vision: It would be a mash-up of genres and pay homage to 1960s war capers. He’d dust off some obscure, deep cut DC supervillains that no casual moviegoer would ever be expected to know and get a giant alien starfish villain named Starro in the mix.

Warner Bros. said yes. And it wouldn’t have to be PG-13 either.

Though bold, it’s not entirely surprising: Not only had Gunn turned the “Guardians of the Galaxy” into A-list Avengers, he was also at the time ( suddently and briefly ) a free agent. While David Ayer’s 2016 “Suicide Squad” might have been a critical disaster, it was still a financial hit. In other words, a second movie, regardless of whether it was a sequel, a reboot, a re-do, or none of those things (which this is) was not out of the question.

Yes, it features some of the same actors playing the same characters, like Margot Robbie’s Harley Quinn, Joel Kinnaman’s Rick Flag, Viola Davis’s Amanda Waller and Jai Courtney’s Boomerang. But as Robbie said, Gunn’s “The Suicide Squad,” which debuts in theaters and on HBO Max on Aug. 6, is “just a different thing,” even if it does essentially bear the same name.

“This movie is not a family film,” Gunn said. “My dad would take me to see this movie if I was 12 or 13 and I don’t think it would be a big deal. But if you get younger than that, it’s kind of weird.”

And already it has one big advantage over Ayer’s: The reviews are stellar.

“’The Suicide Squad’ is something no one’s ready for, but everybody needs,” said John Cena. “Everyone will leave the theater satisfied.”

The WWE star plays Peacemaker, a deranged Captain America-type who will proudly “kill any man, woman or child” to maintain the peace.

Part of that might have to do with the fact that Gunn, who wrote and directed, had free reign to do whatever he wanted, which included killing off any character he wanted, too.

“James really knew what he wanted to make and from the pitch to the script to the pre-production, it never deviated,” said producer Charles Roven.

That involved assembling both characters and actors that didn’t make immediate sense together.

“It does have this postmodern vibe,” Gunn said. “Each of these superheroes came from a different genre. Bloodsport is sort of a grim, dark thing and Polka-Dot Man is from some goofy old cartoon and Peacemaker’s from a dumb 70s TV show and Ratcatcher is from almost like a ‘Saw’ type of movie or something. And they’re all coming together. The actors were like that, too. They all have their own styles and different ways of going about it. And it really is my job as a director to make them all on the same page.”

He called on some of his mainstays, like Nathan Fillion, who he’s been friends with since Gunn’s debut “Slither,” and Michael Rooker, who he clicked with on “Guardians.” Even Sylvester Stallone (also in “Guardians”) agreed to voice the dim-witted, flesh-eating King Shark. But Gunn didn’t just go with safe choices. He also cast an unknown Portuguese actor in her first American film, Daniela Melchior, as an unknown villain: Ratcatcher II. And already she’s being singled out as making a breakthrough.

For Bloodsport, a sharpshooter character that would require not just action know-how but comedic acumen, he enlisted Idris Elba. And it was a welcome departure for the actor.

“I was a fan of his and he was a fan of my potential. He wanted me to play a character that he hadn’t seen me play,” Elba said. “I’ve been trying to do some comedy for years and never get a shot. I don’t know what it is about me. I’m really goofy. I dad-joke everyone to death.”

Cena came aboard as Peacemaker who spars frequently with Bloodsport. Their banter, Cena said, “came naturally.”

“He’s extremely witty,” Cena said. “He has that kind of a UK flavor and I’m so much more over the top that it really does go together well.”

Everyone got along famously. It’s part of Gunn’s process to ensure he’s enlisting a group of decent humans. He even called his ex-wife, Jenna Fischer, who’d worked with Elba briefly on “The Office” to make sure the actor wasn’t a jerk. (Fischer had only lovely things to say about Elba).

“It’s an interesting thing when you have a big group of often big personalities put together to see how that balances out,” Robbie said. She described their dynamic as “a lot of laughing, joking.”

“I think that’s why a lot of those scenes feel so real and fun. It was also like that in between takes and when we weren’t shooting. It was a really, really good group,” she said.

“The Suicide Squad” was an epic production, too, boasting the biggest sets in Warner Bros. history. (This from the studio behind modern epics like “Harry Potter” and “The Dark Knight.”)

They even finished on time and under budget. And, over the pandemic, Gunn squeezed in a Peacemaker spin-off miniseries for HBO Max.

It’s why Gunn has gotten so much freedom from some of the biggest shops in the movie business. He was even rehired on “Guardians 3” in short order (which he’s been working on non-stop on the weekends). He doesn’t mind if there’s some extra pressure now because of the successes.

“I love taking actors that people don’t know — people like Daniela Melchior or even Chris Pratt back when that was happening, or Pom Klementieff — and putting them on the worldwide stage, getting people to see how great they are. I love taking songs by people... like K. Flay and Grandson... and putting it on a grand stage,” Gunn said. “I love the idea that everybody has purpose and everybody has meaning, no matter how insignificant you feel.”

He added: “Being able to elevate things that aren’t always propped up by society, being able to put Peacemaker on the same level as Batman and Superman is cool to me.”