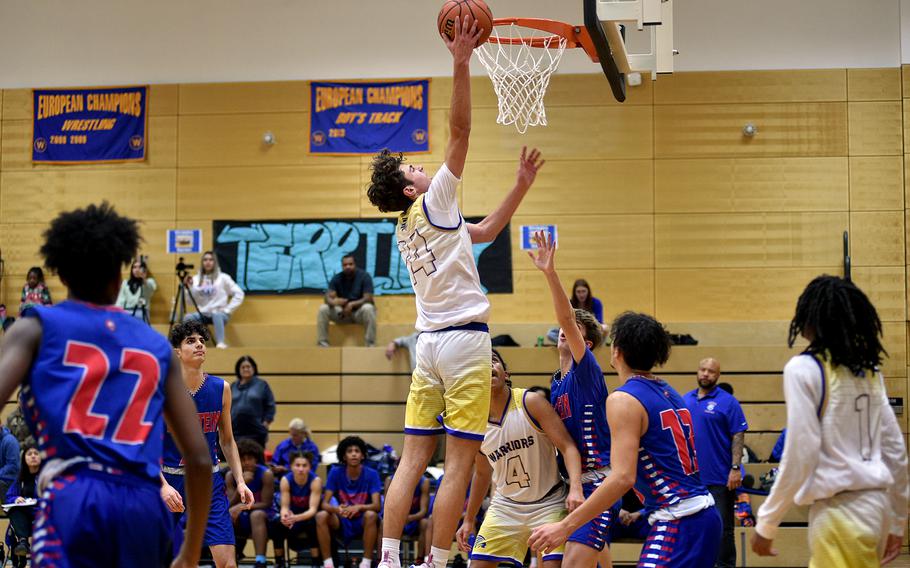 Wiesbaden's Collin Koschnik lays in a bucket during the first quarter of the Warriors' 52-48 loss to Ramstein on Thursday evening at Wiesbaden High School in Wiesbaden, Germany. (Matt Wagner/Stars and Stripes)

WIESBADEN, Germany – If you talked to the Ramstein Royals following Thursday night’s game against Wiesbaden, it wasn’t easy to tell who won the game.

The Royals focused instead on the fourth quarter, in which Wiesbaden (3-1, 4-1) kept chipping away and turned it into a two-possession game after trailing by double digits.

“It’s an eye-opener for us because we didn’t play to our full expectations,” said Angel Jones, who totaled seven points and nine rebounds in the win. “We didn’t play at the level that we’re capable of.”

That sentiment was echoed by Ramstein coach Brendan Rouse.

After losing to Division-I leader Stuttgart on Saturday at home, the Royals have ripped off two consecutive wins against crosstown rival Kaiserslautern on Tuesday and then the Warriors. But getting outscored by 11 points in the final frame highlighted the malaise the coach sees in his squad.

“I think we’re in a little bit of a mental stall,” Rouse said. “We’re winning and all, but we’re not winning the way we’re supposed to, the way we think we should be. So, we still feel like we have a lot of work to do.”

For three quarters, however, the Royals looked to be on top.

Senior Israel Rouse hit a jumper at the 4:51 mark in the second period, giving Ramstein a 22-20 lead. The Royals proceeded to finish the first half 17-7 run, concluding with a three-pointer by Timar Dix at the buzzer to give them a 37-27 lead at the break.

A 9-2 run expanded Ramstein’s lead to 17 points at the 3:32 mark in the third quarter, and the visitors seemed to match everything Wiesbaden threw at them.

Until the final 6:44 of the game, that is. Trailing by 18 points, the Warriors finished the game on a 15-2 run. The Royals committed seven turnovers and missed their final nine shots. The last two points came via the charity stripe by Dix, who finished with 12 points. 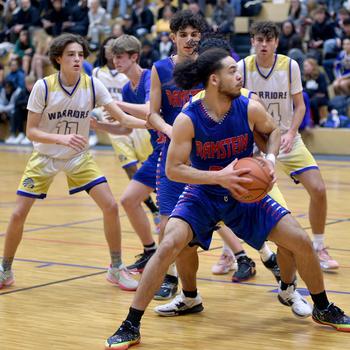 Ramstein's israel Rouse backs down a defender during a game at Wiesbaden High School on Thursday in Wiesbaden, Germany. In the background are the Warriors' Gavin DeLuca, left, and Collin Koschnik, right. (Matt Wagner/Stars and Stripes)

“We were just getting into our own heads,” said Israel Rouse, who amassed a game-high 18 points. “We were playing pick-up basketball. We stopped listening to coaches, we stopped trusting our assistant coaches on our bench and the plan the coaches put together for us.”

As down as Ramstein seemed about the win, Wiesbaden coach David Brown was just as upbeat about the Warriors after the loss.

The Warriors were missing a few players due to illness, and Brown mentioned the physical disparity between the two squads. Nigel Rodriquez and Jordan Thibodeaux paced Wiesbaden with 14 and 13 points, respectively, while Thibodeaux dished out six assists.

“They’re a great team in terms of putting physical pressure on you because they battle so hard,” Brown said of Ramstein. “Those guys are championship tested. They battle hard every possession. When you’re not as physically as strong, it wears on you.

“But our guys were so mentally tough tonight to keep fighting throughout the game. I’m just happy that we finished strong, we got better in the fourth quarter and we don’t have any major injuries.”

Ramstein’s Brendan Rouse also heaped praise on his opponent, especially for the way the Warriors fought back in the final frame. 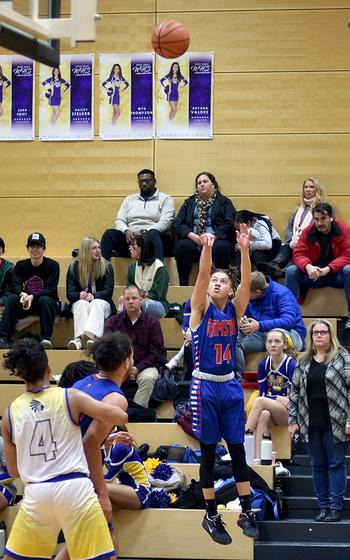 Ramstein's Timar Dix puts up a shot in the second quarter during Thursday's game at Wiesbaden High School in Wiesbaden, Germany. Defending in the low block is the Warriors' Nigel Rodriquez. (Matt Wagner/Stars and Stripes)