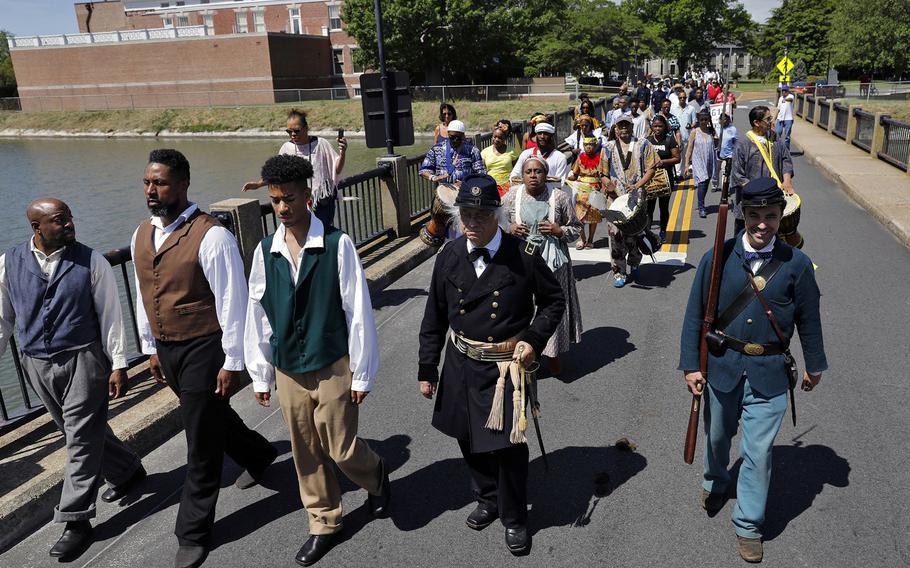 Members of the Contraband Historical Society, African dancers and drummers, re-enactors and members of the community walk to the Parade Ground at Fort Monroe during the Escape to Freedom event May 4, 2019. (Jonathon Gruenke, Daily Press/TNS)

Seeking refuge from their captors, they grabbed a boat and sailed from Sewell’s Point to the Union Army stronghold at Fort Monroe. Arriving at the main gate, the men were granted asylum and deemed “contraband of war” by commander Maj. Gen. Benjamin Butler.

That decision during the Civil War became a catalyst for tens of thousands of enslaved Africans to make the trip to the fort, seeking sanctuary. It heralded the beginning of the emancipation and the end of codified slavery, historians say.

Their experience is something Joseph McGill, the founder of the Slave Dwelling Project, intends to capture during his visit to Fort Monroe on Friday and Saturday. There, he will walk in their footsteps — enter the main gate, where Mallory, Townsend and Baker came, stop at Quarters No. 1, the headquarters of Butler and spend a night at “Freedom’s Fortress.”

McGill will be among the virtual speakers Saturday during Fort Monroe’s and the National Park Service’s annual Contraband Slave Decision commemoration. It’s a two-day program that includes a virtual event on Monday.

Legislation that enabled Union officers to determine contraband of war, plus the emergence of the U.S. Colored Troops, then later the Emancipation Proclamation, have direct ties to the contraband decision, Fort Monroe acting superintendent Eola Dance said.

Monday’s part-two event features Matthew Laird, a partner and senior researcher with the James River Institute for Archaeology, Inc. Laird will share findings from excavations done in 2017 when a team located the ruins of the grand contraband camps in present-day downtown Hampton.

“Provide that context so that we then understand how people lived and how they survived in the grand contraband camp,” Dance said.

Through social media, the commemoration will also highlight the life of those who sought freedom, using virtual living histories presented by the Contraband Historical Society and shared messages from descendants and others, including the family of James Apostle Fields.

“From 1861 to 1864, family members, were finding one another at Fort Monroe, and then establishing their homes in Phoebus, and in downtown Hampton,” Dance said.

By chance, a decade ago, McGill spoke into existence what became the slave dwelling project. As public historian at Magnolia Plantation & Gardens in Charleston, he was among a team doing a restoring on a slave cabin.

“I got this idea of spending a night in one of the cabins that was being renovated and preserved at the time,” McGill said. “When I said that out loud ... someone thought it was a great idea.”

Now 11 years and 25 states, plus Washington D.C., McGill has spent a night at some 150 former slave dwelling sites, a few of them on multiple occasions. McGill said that recognizing these places helps complete the narrative of what happened at these historic sites.

“It was not their intent to tell our stories. They had to eventually be convinced that was the right thing to do,” McGill said. “We have to insert ourselves into these places into these stories. I think a way of doing that is to recognize the spaces where our ancestors inhabited. If we can realize that the place existed and that they built that space, then we can also realize that they built that nice, beautiful big house that exists also ... their labor was stolen for that house to exist.”

The Contraband Decision commemoration begins at 7 p.m. Saturday and requires registration at this link: https://contraband-commemoration-campfire-chat.eventbrite.com to ask questions. Monday’s event begins at 6 p.m. and will be streamed at Hampton History Museum Facebook page.