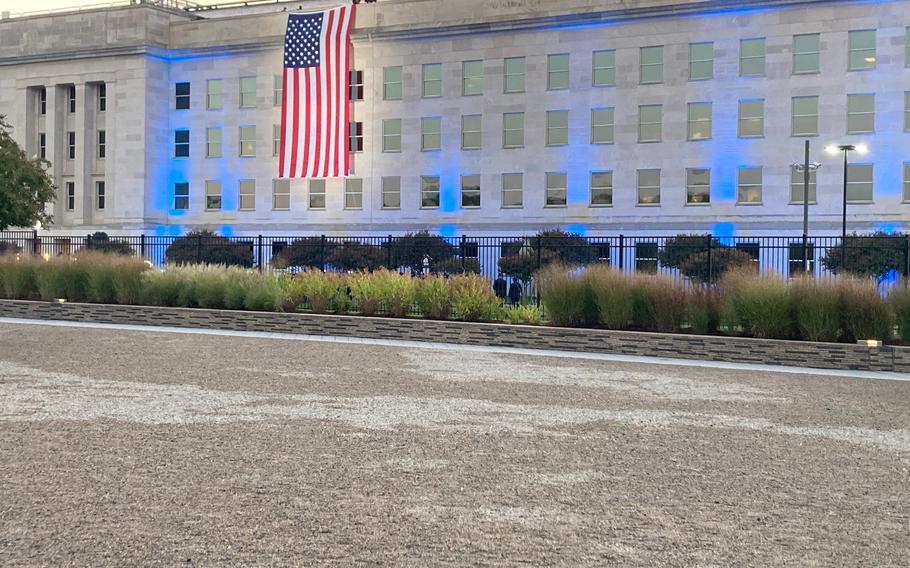 The Pentagon’s first event of the day was the flag unfurling, which took place at 6:47 a.m. The side of the building was lit up blue. There were a couple dozen people in attendance. Bagpipe players performed before the flag was unfurled. (Mike Brest)

WASHINGTON – The Pentagon’s 9/11 observance ceremony on Saturday morning began with reading the names of the 184 victims of the attack on the building, the clang of a ship bell punctuating each one.

It took 20 minutes to read all the names. It took 20 years to end the war in Afghanistan that the attacks provoked.

The Pentagon was one of the targets hit by commercial jets hijacked by al-Qaida terrorists the morning of Sept. 11, 2001. At about 9:37 a.m., American Airlines Flight 77 slammed into the Pentagon -- the third of four hijackings that day that killed a total of 2,996 people in New York, Pennsylvania and at the Pentagon.

Of those who died in the attack at the Pentagon, 125 were Defense Department employees.

“Today, we remember not just who our fallen teammates were, but the mission that they shared,” Defense Secretary Lloyd Austin said at the ceremony. “And we recall their common commitment to defend our republic and to squarely face new dangers.”

The ceremony took place at the Pentagon memorial at the side of the building that was destroyed in the attack. It remains closed to the public because of the ongoing pandemic but opened briefly for the event.

Saturday was the first 9/11 since the attacks in which no U.S. service members were on the ground in Afghanistan. The final American troops left Kabul, Afghanistan’s capital, on Aug. 30, concluding nearly two decades of war in that country. 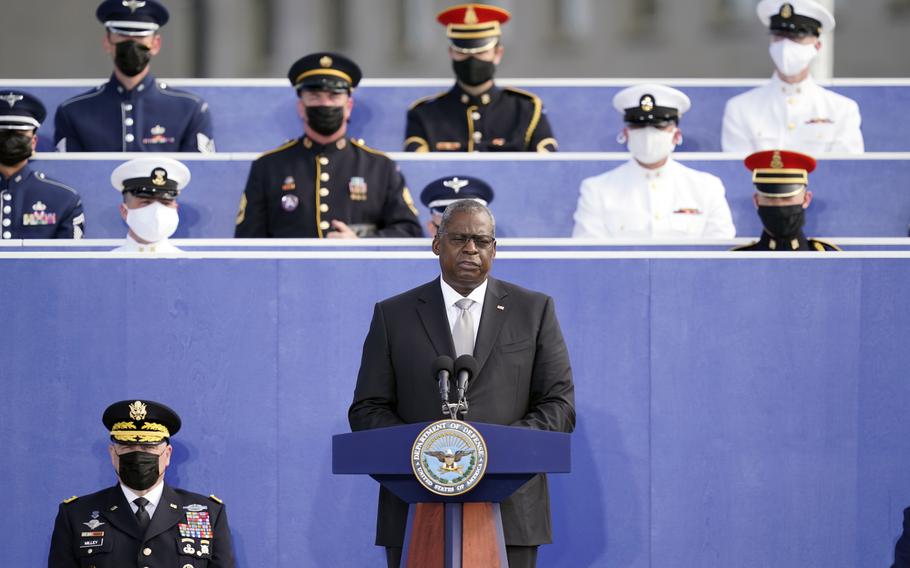 Defense Secretary Lloyd Austin speaks during an observance ceremony at the Pentagon on Saturday, Sept. 11, 2021, on the morning of the 20th anniversary of the terrorist attacks. (Alex Brandon/AP )

Austin reflected on the time that passed since the attacks and the great losses of life, noting that war ended how it started -- with American bloodshed. Eleven Marines, a sailor and a soldier were killed Aug. 26 when an Islamic State suicide bomber detonated an explosive vest and gunmen fired on crowds outside the Kabul airport where U.S. and coalition troops were evacuating Americans and vulnerable Afghans.

“Now, almost a quarter of the citizens who we defend today were born after 9/11,” Austin said. “Many of the 13 brave men and women who, just days ago, gave their lives to save others in Afghanistan were babies back in September 2001.”

Army Gen. Mark Milley, chairman of the Joint Chiefs of Staff, spoke to the brokenhearted still reeling from losses in Afghanistan and 9/11, calling the last two decades “incredibly emotional, exhausting and trying years.”

“We are all now, this very day, very conflicted with feelings of pain and anger, sorrow and sadness, combined with pride and resilience,” he said. “But one thing I have certain for every soldier, sailor, airman, Marine ... You did your duty. Your service mattered. Your sacrifice was not in vain.”

Milley also expressed continuing defiance against al-Qaida, the Islamic State and the Taliban, which returned to power in Afghanistan last month after the U.S. drove the group out in 2001. 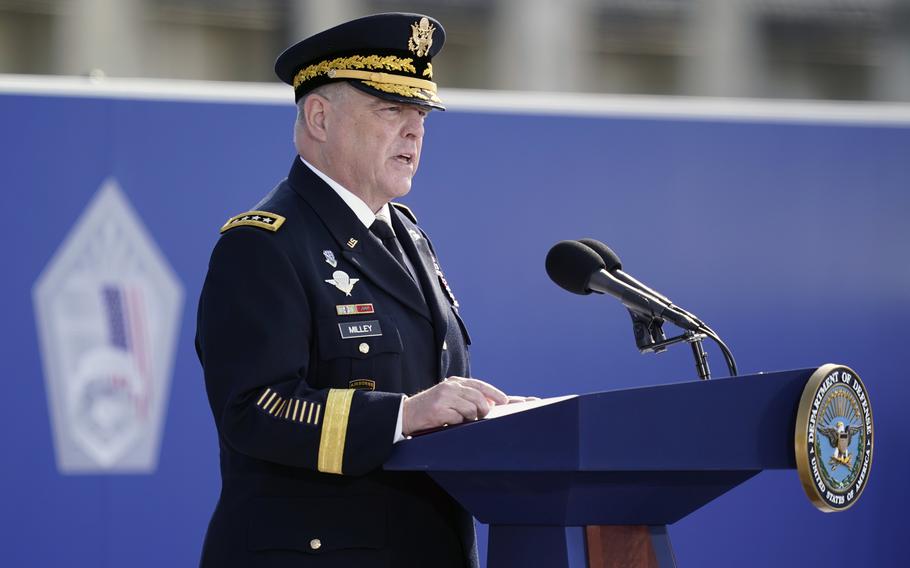 Army Gen. Mark Milley, chairman of the Joint Chiefs of Staff, speaks during an observance ceremony at the Pentagon on Saturday, Sept. 11, 2021, on the morning of the 20th anniversary of the terrorist attacks. (Alex Brandon/AP )

“They tried to destroy us. They tried to divide us. They tried ultimately in vain to terrify us, but their murderous intent was never realized,” he said. “While we grieve for our fallen, we celebrate the lives they led, their legacies live in the idea that is America. And no terrorist anywhere on Earth can ever destroy that idea.”

As Austin closed the ceremony, he thanked the crowd of survivors and victims’ loved ones “for all you who have given, and for the inspiration that you provide.”

“We still work here, we still remember here, we still uphold our values here,” he said. “The hallways that we tread were the ones that so many of them walked. It will always be our duty to fulfill their missions, to live up to their goodness, and to stand guard over this democracy.”