Nuclear bombs fell on North Carolina in 1961; the state was one step from disaster 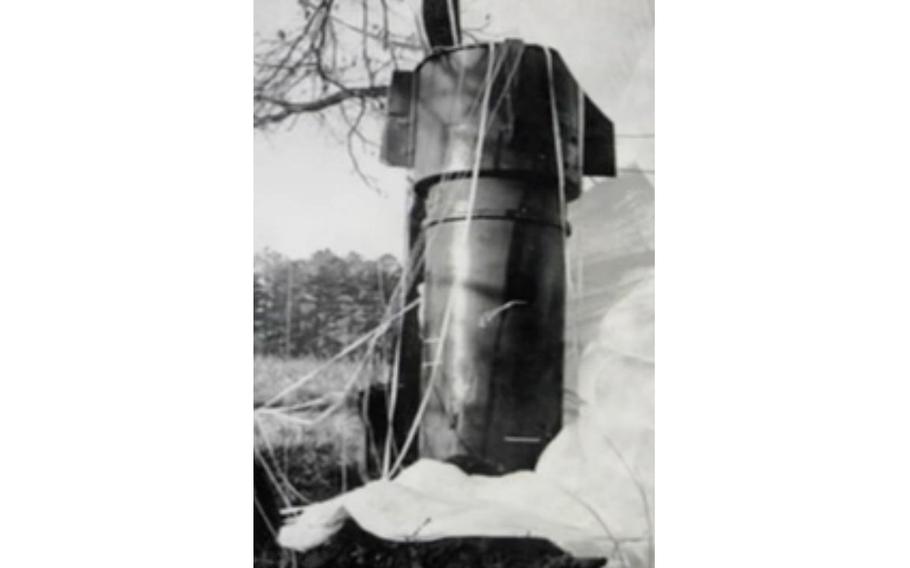 (Tribune News Service) — Two nuclear bombs that fell on North Carolina in 1961 were just one step from detonating.

The state narrowly escaped disaster after a military plane carrying the nuclear weapons crashed on Jan. 24, 1961. As the bomber exploded, the two MK39 bombs plunged to the ground near Goldsboro, the N.C. Department of Natural and Cultural Resources said on the 62-year anniversary of the crash.

Billy Reeves told National Geographic he was getting ready to go to sleep when he saw a plane with a missing wing come down about a quarter-mile from his home.

“Everything around here was on fire,” Reeves told the news outlet in 2021. “The grass was burning. Big Daddy’s Road over there was melting. My mother was praying. She thought it was the End of Times.”

Officials said three crew members died in the crash, which caused the bombs to release over a rural area.

“Seven of the eight arming, fusing and firing switches and devices in one bomb automatically activated,” state officials wrote in a blog post. “Only a crew-controlled switch prevented a nuclear detonation.”

The weapons came from a B-52G Stratofortress bomber, which was flying during the Cold War, a decades-long period of tension between the United States and the former Soviet Union. The crash was reported about 10 miles from Seymour Johnson Air Force Base in Goldsboro, southeast of Raleigh.

“At the height of the Cold War, U.S. policy was to keep armed nuclear aircraft in the air at all times in the event of a conflict,” according to the N.C. Department of Natural and Cultural Resources.

Historians said one of the bombs stayed mostly intact and fell to the ground with a parachute, while the other “broke apart on impact.” The U.S. Air Force said part of the bomb sank into the ground and that “there is no detectable radiation or hazard in or around the area.”

“Historians believe that the Goldsboro incident was one of the closest near-disasters of the Cold War because safety interlocks on the weapons failed, having gone through all of the steps to detonate, save one,” according to state officials.