From the archives, 2002: Crew keeps Kitty Hawk ready to steam 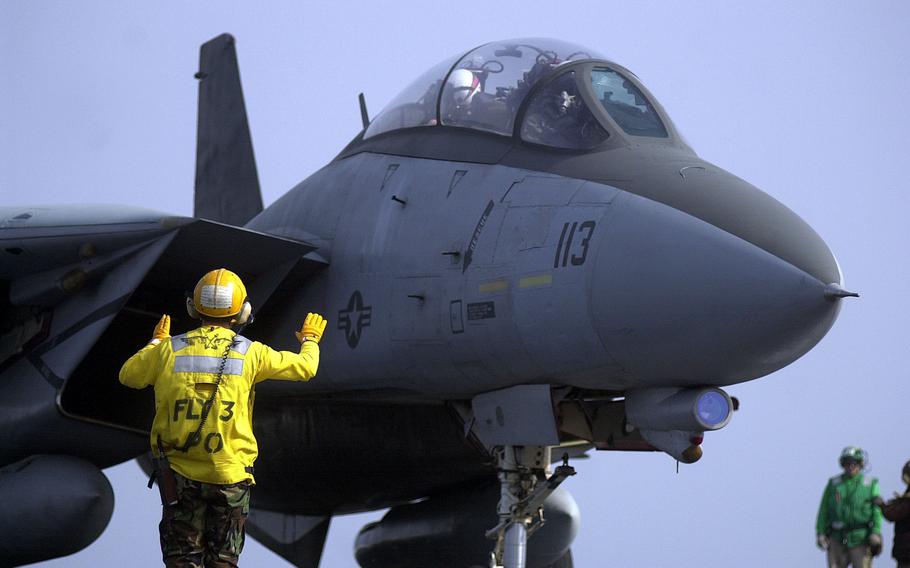 This article first appeared in print in the Stars and Stripes Pacific edition, April 19, 2002. It is republished unedited in its original form.

ABOARD THE USS KITTY HAWK — Even though it’s not headed for the Arabian Sea, the USS Kitty Hawk Battle Group is ready to steam that way if needed.

While talking with reporters aboard the Yokosuka-based carrier after it pulled out of port Monday, Rear Adm. Steve Kunkle, Kitty Hawk Battle Group commander, said his ships were ready to return to the Arabian Sea this month. But a decision “made somewhere higher than me” altered those plans, he said.

He said a decision by the Joint Chiefs of Staff was the reason for the mission shift. Reports by The Associated Press last week indicated local commanders were reluctant to part with the battle group in the region that has potential hotbeds such as North Korea and the Philippines.

“We’re prepared to respond as directed,” Kunkle said. “We’ve trained in all our missions.” 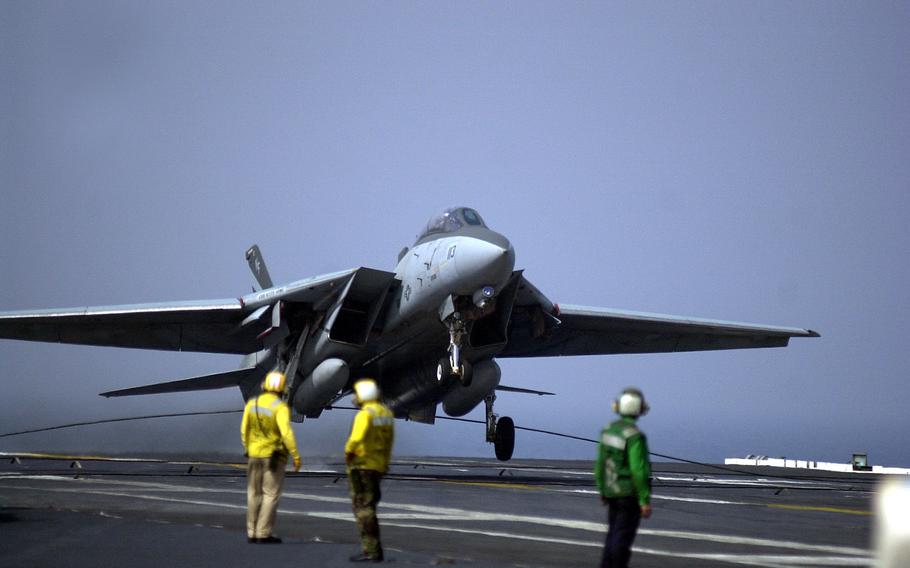 An F-14 Tomcat from VF-154 snags an arresting wire as it touches down on the flight deck of the USS Kitty Hawk on Monday, April 15, 2002. With this touchdown, several days of carrier qualifications followed. (Rick Chernitzer/Stars and Stripes) 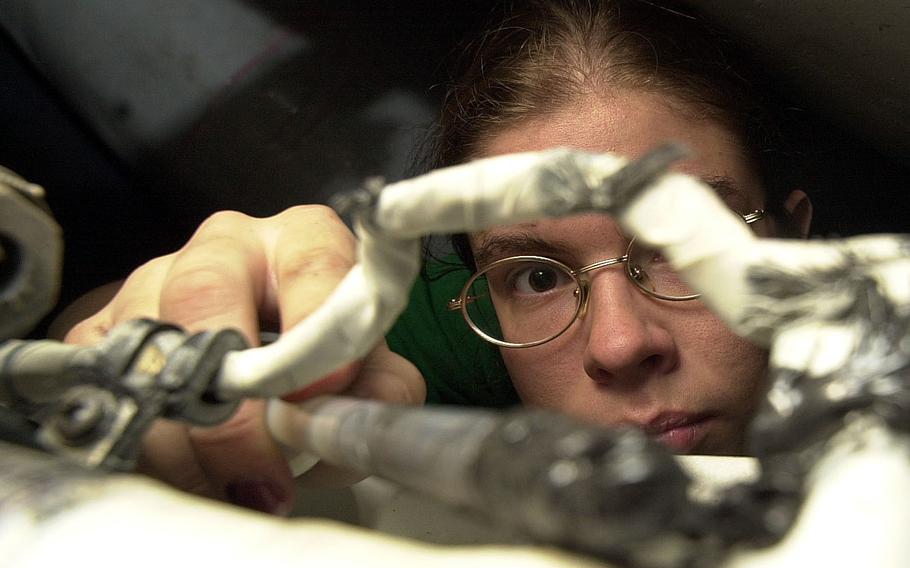 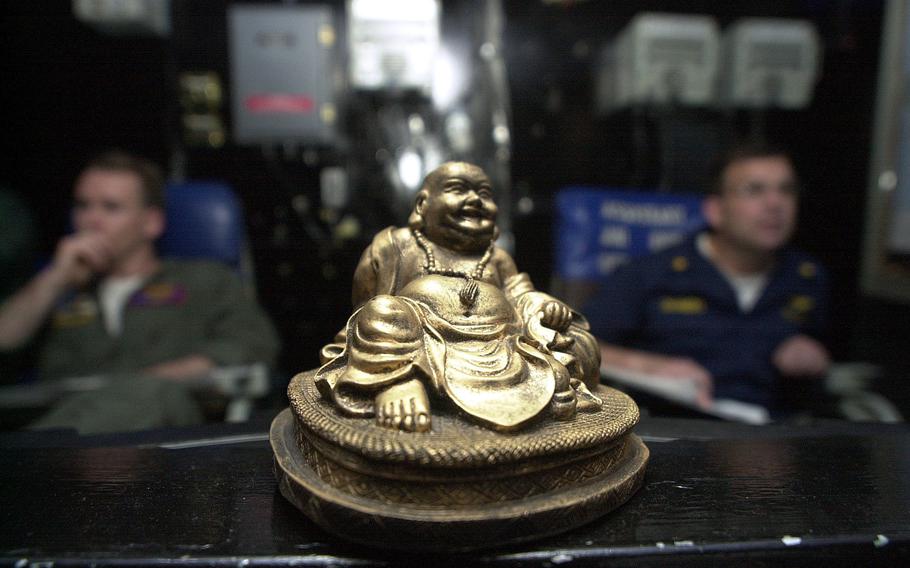 A Buddha statuette sits on a console in the air traffic control center aboard the USS Kitty Hawk, while officers monitor air traffic above the carrier on Monday, April 15, 2002. (Rick Chernitzer/Stars and Stripes) 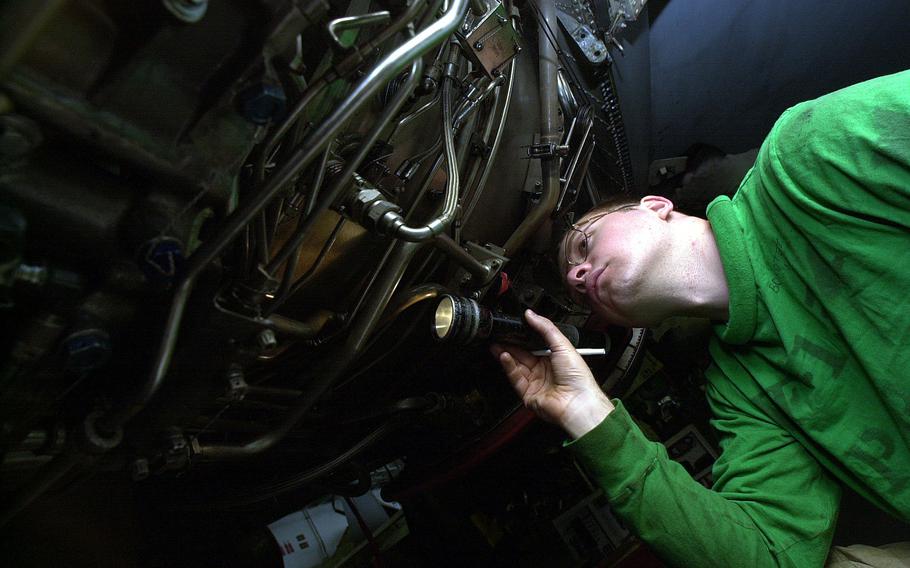 With a handful of family members seeing it off, the Kitty Hawk and part of its battle group left Yokosuka Naval Base on its spring deployment. The USS Chancellorsville and USS Vincennes also left Yokosuka on Monday.

While the scheduled five-month deployment has been shaved down due to the mission change, Kitty Hawk spokesman Lt. Cmdr. Rick Haupt said he couldn’t give specifics on the ship’s return.

The ship left port after a two-week repair following sea trials last month. The Kitty Hawk’s skipper, Capt. Tom Hejl, acknowledged the 41-year-old carrier had a tight schedule following its return to Yokosuka in December. Equipment “casualties” were repaired in a hurried time frame wrapped around the sea trials, he said.

“We were compressed to 75 days for our repair period,” Hejl said. “But I’m confident it came together well.” 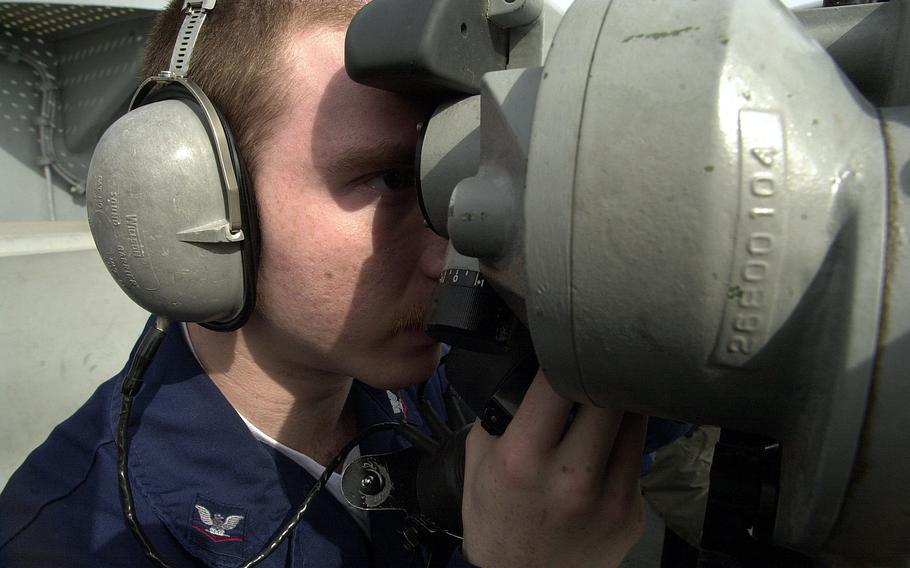 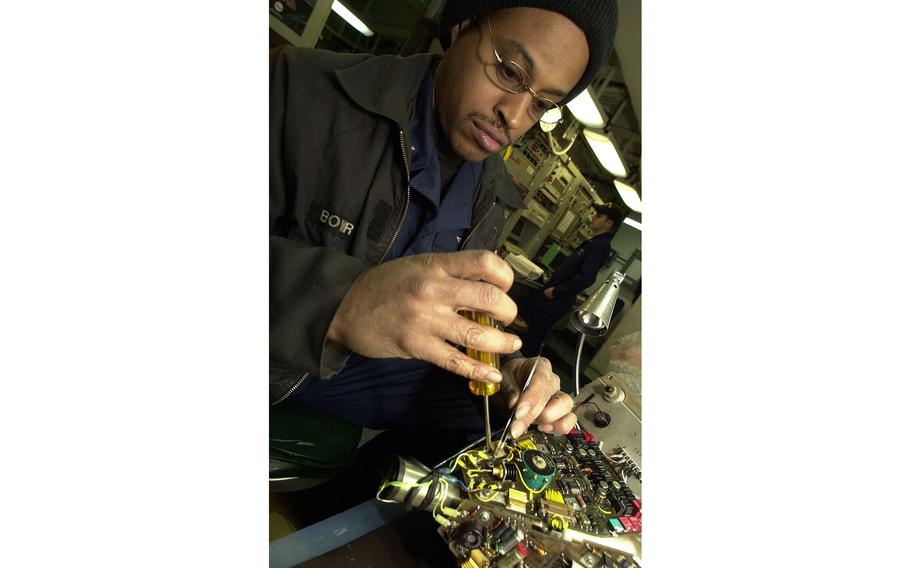 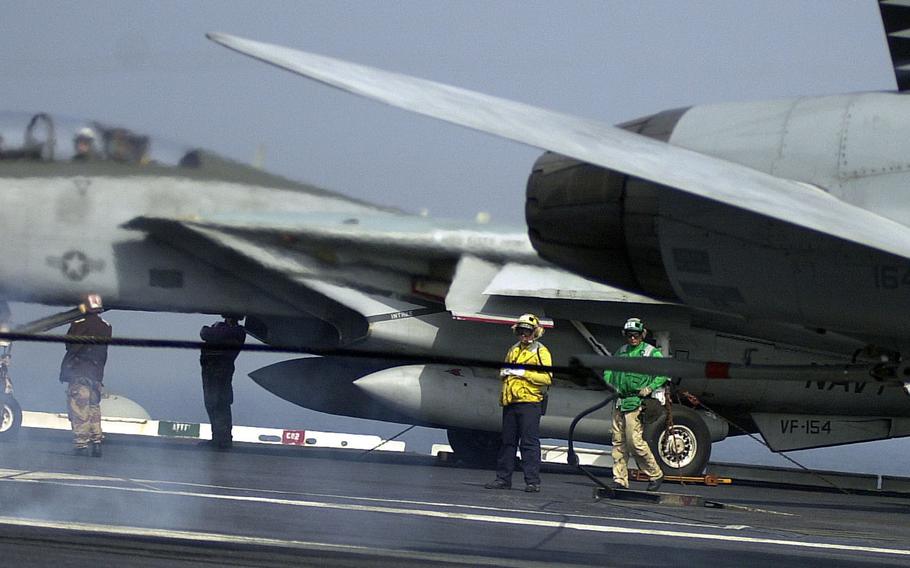 Crewmembers watch as an F-14 Tomcat snags an arresting wire on the flight deck of the USS Kitty Hawk on Monday, April 15, 2002. (Rick Chernitzer/Stars and Stripes) 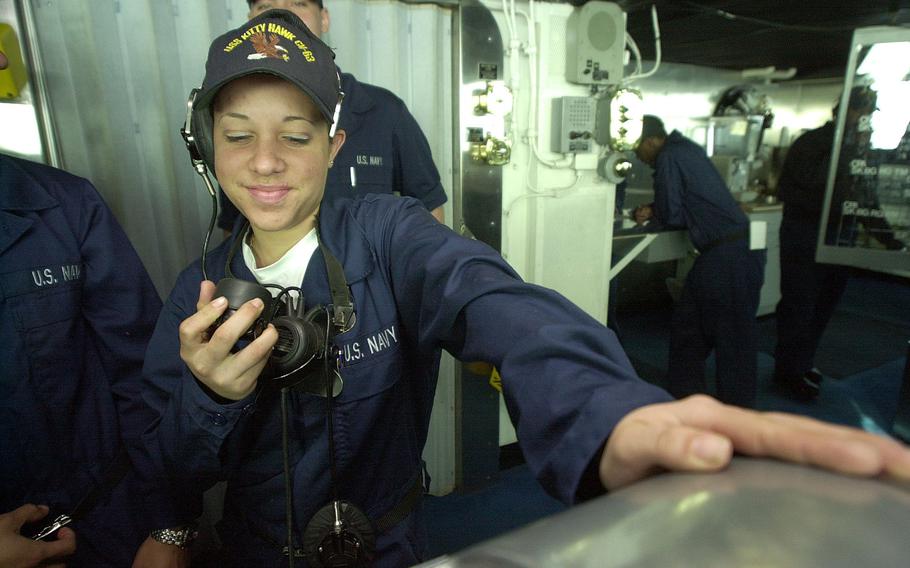 Seaman Natalia Francisquini Gines stays in touch with the engineering spaces through a sound-powered phone while standing watch on the bridge of the USS Kitty Hawk on Monday, April 15, 2002. (Rick Chernitzer/Stars and Stripes)

Hejl said the emergency work had no effect on the decision to cancel the Kitty Hawk’s mission in the Arabian Sea.

When the ship was last in that region, it was used as an “afloat forward-staging base” for 16 Special Forces troops involved in Operation Enduring Freedom, he said.

“It’s not exactly what a ship of this type was designed to do,” he said, “but it could be done again. It certainly worked out well.”

Lt. Cmdr. Butch Kissick, one of the ship’s five “shooters” responsible for launching aircraft, said the first few days at sea would be spent qualifying pilots for carrier landings. The ship will then head south toward Okinawa, he said. 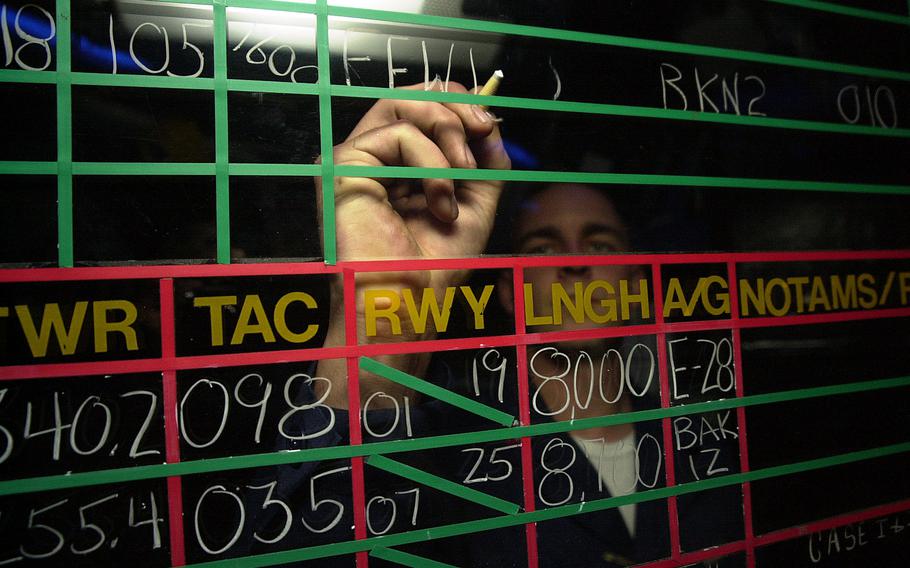 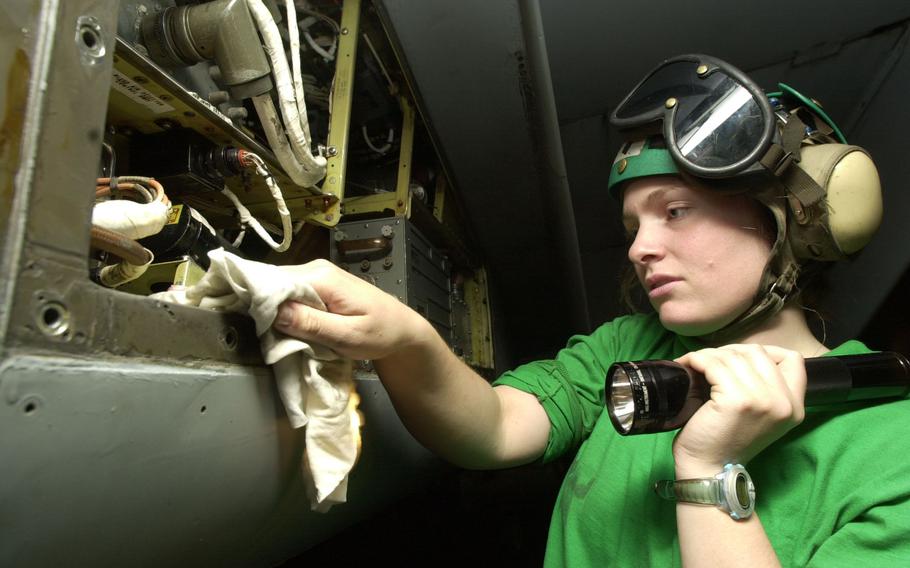 Petty Officer 3rd Class Rebecca Wood, assigned to VFA-154, cleans the inside of an avionics panel of an aircraft on the USS Kitty Hawk’s hangar bay Tuesday, April 16, 2002. (Rick Chernitzer/Stars and Stripes) 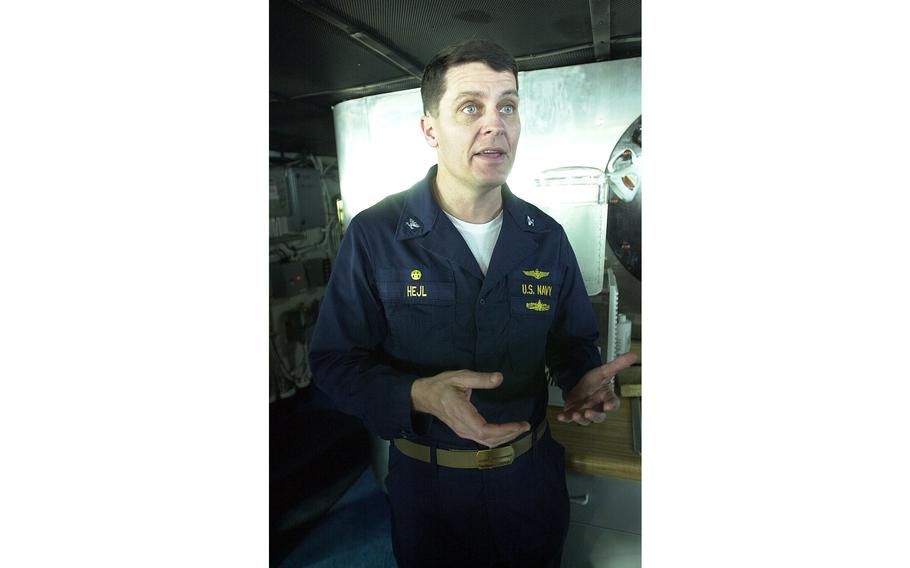 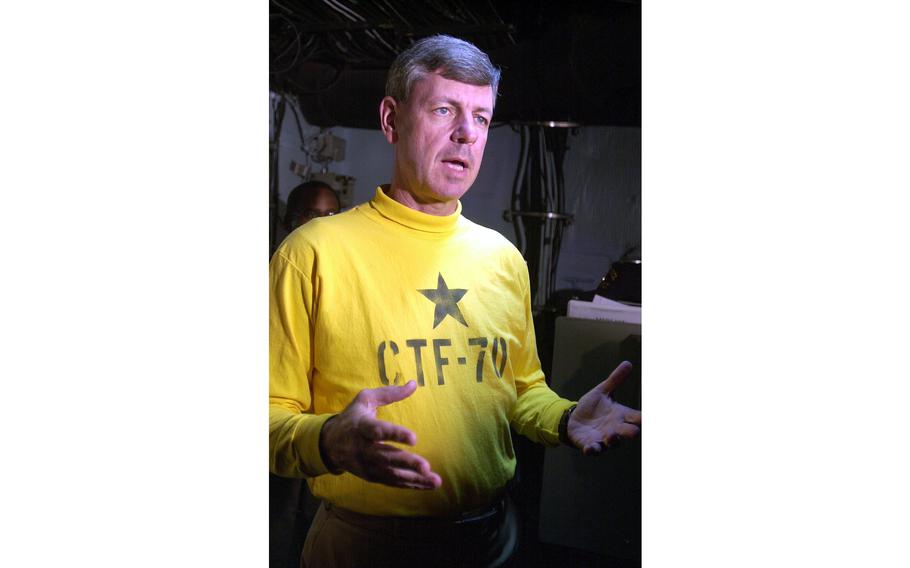 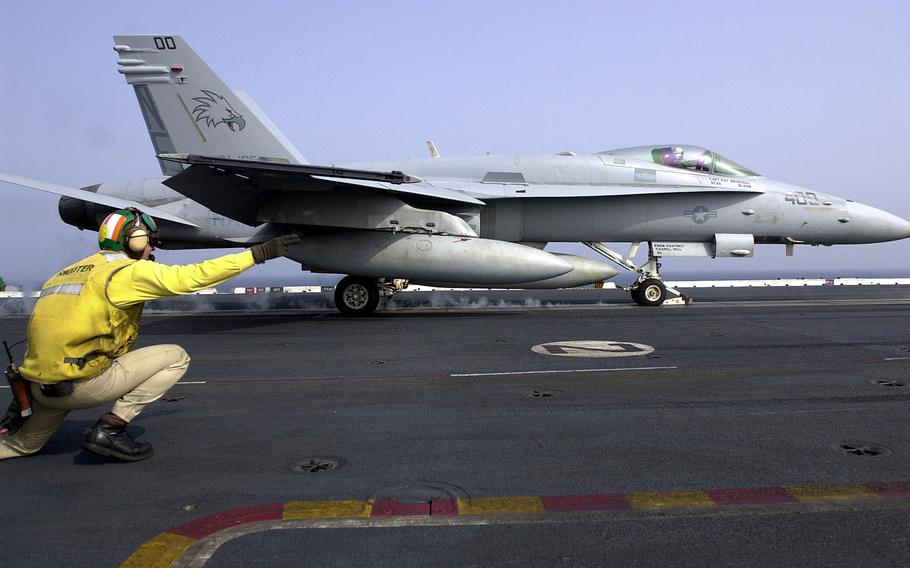 A flight deck “shooter” signals as an F-18 Hornet from VFA-195 is launched from the USS Kitty Hawk’s flight deck Monday, April 15, 2002. (Rick Chernitzer/Stars and Stripes)

Within hours after the ship left port, F-14 Tomcats and F-18 Hornets began arriving from Atsugi Naval Air Facility. Carrier qualifications began almost immediately. Aircraft launched from the two forward catapults, or “cats,” only circle about and return for an arrested landing at the rear of the ship. Pilots do this routine countless times, both day and night.

The qualifying is standard for the air wing, said Cmdr. James Flatley, Fighter Squadron 154’s commanding officer, based at Atsugi.

“That’s really the reason we’re out here now,” Hejl said. “We still have to be ready to go whenever,” Hejl said.