From the archives, 2015: Missile Warning Operations Center keeps continuous eye out for missiles ‘launched in anger’ The Ballistic Missile Early Warning System, or BMEWS, is one of three such installations that keep an eye out for long-range missiles leaving “the Russian landmass.” (Patrick Dickson/Stars and Stripes)

This article first appeared in print in the Stars and Stripes Global edition, Jan. 15, 2015. It is republished unedited in its original form.

They talked over a secure system with other operators around the globe, never more than an arm’s length from a telephone with pushbutton connections to some of the highest-level security personnel in the United States.

The airmen were at the helm of the Ballistic Missile Early Warning System, a radar that detects, tracks and provides threat assessment of ballistic missiles launched from the Russian landmass.

“The radar will compute where the object came from, will give you a rough location of the launch site and, more importantly, it will project where it’s going,” said Maj. Chris Castle, operations officer for the 12th Space Warning Squadron. He spoke matter-of-factly about the technical aspects of the BMEWS, the mission and nuclear annihilation.

“At that point, we hand that off to the command and control centers — Cheyenne Mountain — and people will determine if we’re under attack.” 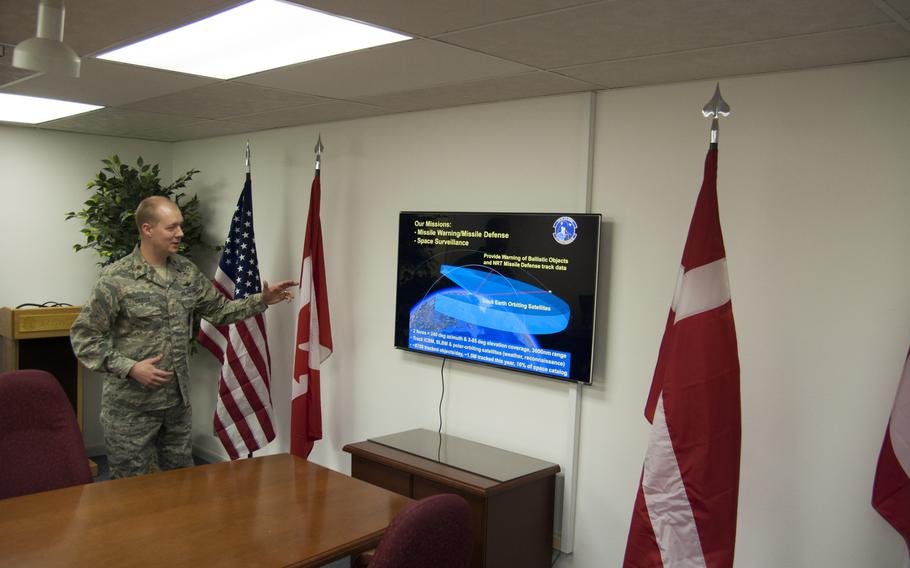 Maj. Chris Castle, the operations officer for the 12th Space Warning Squadron, chats matter-of-factly about the technical aspects of the BMEWS, about the mission, and about nuclear annihilation. (Patrick Dickson/Stars and Stripes)

Castle noted that while the BMEWS has other more routine, time-consuming functions, missile warning is the core mission at Thule.

It’s a year-round, 24/7 operation with downtime only for maintenance, which is tightly controlled and scheduled in advance with its sister radars at RAF Fylingdales in the U.K. and Clear Air Force Station, Alaska.

The radars send out a sweep of beams at a low elevation that allow the receivers to detect anything in its window. They allow operators to see anything coming off the Russian landmass. “It can detect anything,” Castle said. “It’s sufficient enough to catch any Earth-launched object” within its field of view.

Because the radar is so sensitive — it can “see” a flock of geese — computer algorithms analyze the size and speed of any object and determine whether it is threatening.

When the radar detects something that could be a ballistic missile, it will present a track — “a yellow line on the computer with an origin point, where the object is in its flight path, and then where it’s headed,” Castle said.

That information is passed up the chain to Cheyenne Mountain, where it is integrated and shotgunned to a network defense system that includes AEGIS cruisers, Patriot missile batteries and U.S. missile silos. Cheyenne Mountain Complex in Colorado, familiar to some from the Matthew Broderick movie “War Games,” was built deep inside the granite mountain in the late 1950s as a hardened command-and-control center for defense against Soviet missiles and long-range bombers.

“To my knowledge, we’ve never detected something we didn’t know was coming,” Castle said.

“We can see test launches,” he said. “When the Russians launch test vehicles from the North Sea — and they routinely test their new submarine-launched ballistic missile, the Bulava — usually we can see those. But, luckily, there’s a large intelligence structure within the Department of Defense, so those things are not surprises to us.” The entrance to the Ballistic Missile Early Warning System operations building is flanked by “cooling towers,” which channel Arctic air under the facility so any heat generated by the facility is taken away. Building on permafrost requires such measures, so the buildings’ integrity is not compromised — a critical consideration for radars aiming thousands of miles out. (Patrick Dickson/Stars and Stripes)

While missile warning is the priority, 98 percent of what consumes the BMEWS staff is tracking space objects.

“Every day, we receive a list of objects the radar is supposed to track. And the radar is a very smart machine, and it does most of this on its own,” Castle said. “It makes sure that Earth-orbiting objects are where they’re supposed to be.”

“There’s a lot of junk in space. The majority of what’s up there is junk. But we have to keep track of that stuff.”

BMEWS personnel monitoring space junk — the radar is so sensitive it can see something the size of a grapefruit at a distance of 3,000 miles — answer to the Joint Space Operations Center at Vandenburg Air Force Base in California.

For polar-orbiting satellites, the poles are the only common point when the Earth is turning, so operators here see satellites and debris multiple times a day, whereas the same object might pass over a station at the equator only once a day.

“We’re just one small part of the picture. But we’re good, Castle said. “We’re so far north, that anything in a polar orbit is passing through here. So a lot of interesting things are happening in the sky above Thule.” Near the Ballistic Missile Early Warning System radars is Wolstenholme Fjord, its waters being fed by four large glaciers. For this reason, it is sometimes referred to as “the world’s largest ice machine”. (Patrick Dickson/Stars and Stripes)

The U.S. military winds up in some of the most remote places on the planet:

Located on the second-to-last major Aleutian Island, it combines the charm of Greenland weather with the spaciousness of Guam.

Kwajalein Atoll is 2.5 miles long and averages 800 yards wide, and is home to 1,000 people, mostly Americans, about 2,100 miles south-west of Honolulu.

Located on the Tristan da Cunha archipelago in the Atlantic Ocean, RAF Ascension Island is 1,750 miles west of South Africa, and 2,090 miles east of South America. The U.S. Air Force has a small contingent there.

McMurdo Station is operated by the National Science Foundation but houses some military members who get people in and out. It’s on Ross Island in Antarctica, claimed by the nearest country, New Zealand, which is 2,800 miles away.

Diego Garcia, a tiny atoll in the Indian Ocean, is almost 1,000 miles south-southwest of India.

Lajes Field, on the small, Portuguese-owned Azores in the Atlantic some 1,000 miles west of Portugal, is an important refueling station for aircraft.