From the archives, 2015: Extreme conditions part of the landscape 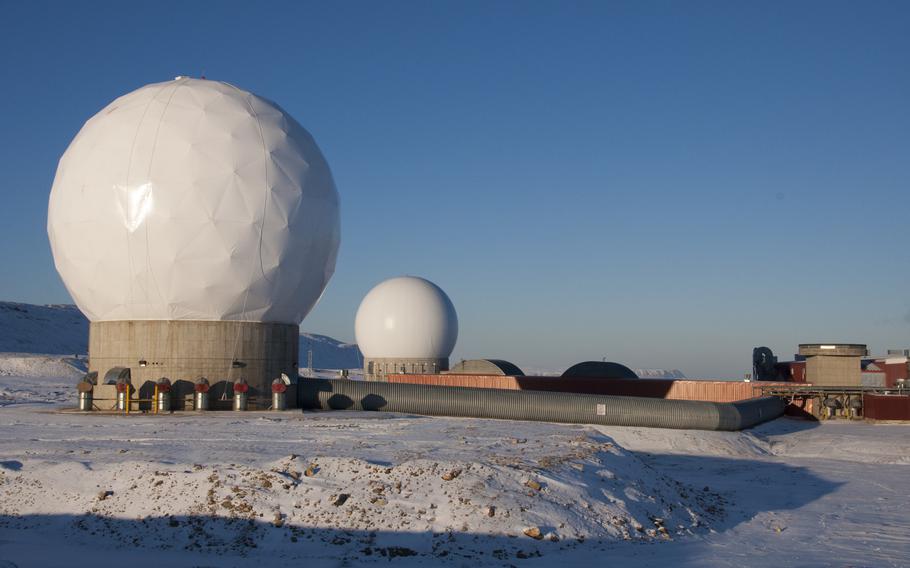 This article first appeared in print in the Stars and Stripes Global edition, Jan. 15, 2015. It is republished unedited in its original form.

THULE AIR BASE, Greenland — Legend has it that Eric the Red, father of famed explorer Leif Ericson, gave Greenland its name to attract settlers.

It’s a plausible theory; the island is inhabited in dots along the southern coasts, since the interior is a frozen wasteland.

The vast ice sheet, 2 miles thick at its peak, stretches for 750 miles to the east coast from Thule, and more than twice that north to south. The big empty. An ice sheet three times the size of Texas. Glaciers spill into fjords along the coast. At Thule, the land slopes down to the base, North Star Bay and Mount Dundas.

The capriciousness of the weather is fascinating and frightening, something all too familiar for base residents.

Winter was fast approaching. As the Earth tilts away from the sun, Thule becomes a land of permanent night, and permanent cold, dipping to as low as 47 below zero, according to base statistics.

“The coldest I saw, during a storm, was minus-60,” 1st Lt. Matthew Smokovitz said. “It gets to a point where you can’t really tell the difference. It’s already cold — who cares at this point?”

High winds, created by low pressure to the west over Baffin Bay, blow in off the ice cap from the southeast. The air is channeled into the valley where Thule is located, increasing the wind speed. According to the base welcome packet, during a storm in March 1972, the anemometer on a storm shelter recorded what is now considered the third highest wind velocity ever: 207 mph.

The welcome packet is probably the only one in the Air Force with this provision: “Storm Condition Delta — All personnel are restricted to the buildings in which they are located at the time a Storm Delta is declared. Absolutely No Pedestrian Or Vehicular Travel Is Permitted.” Sean Lohr, a contractor with Harris Corporation at Thule, opens an airlock into one of the radomes. (Patrick Dickson/Stars and Stripes) 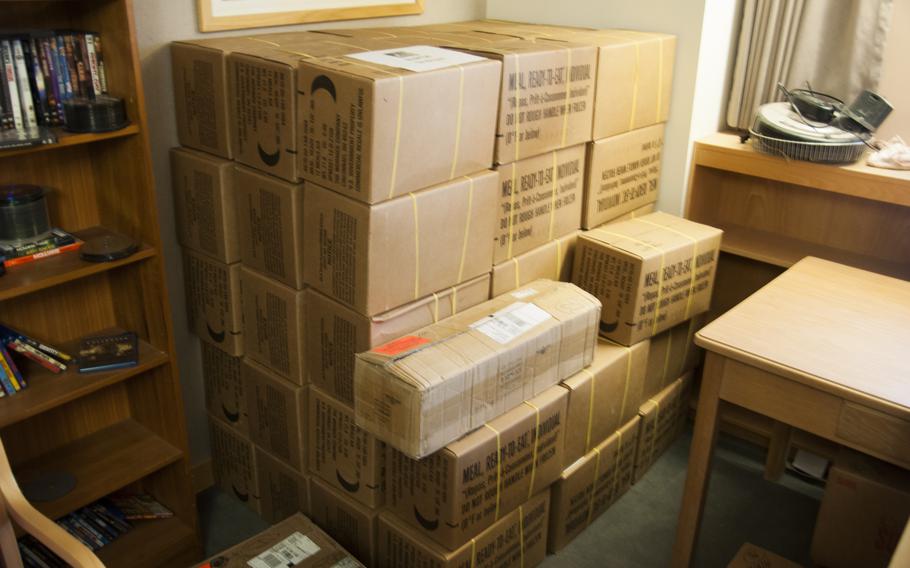 At the North Star Inn, the Air Force lodging building on Thule, 52 cases of Meals, Ready to Eat crowd a storage room. The weather can change so quickly that guests might need these; in Storm Delta conditions, everything on base shuts down including the dining facility, some 100 yards away. (Patrick Dickson/Stars and Stripes) Mount Dundas is framed by the piping that carries all the utilities for heat and water. There is no digging, or building on, the permafrost. (Patrick Dickson/Stars and Stripes) 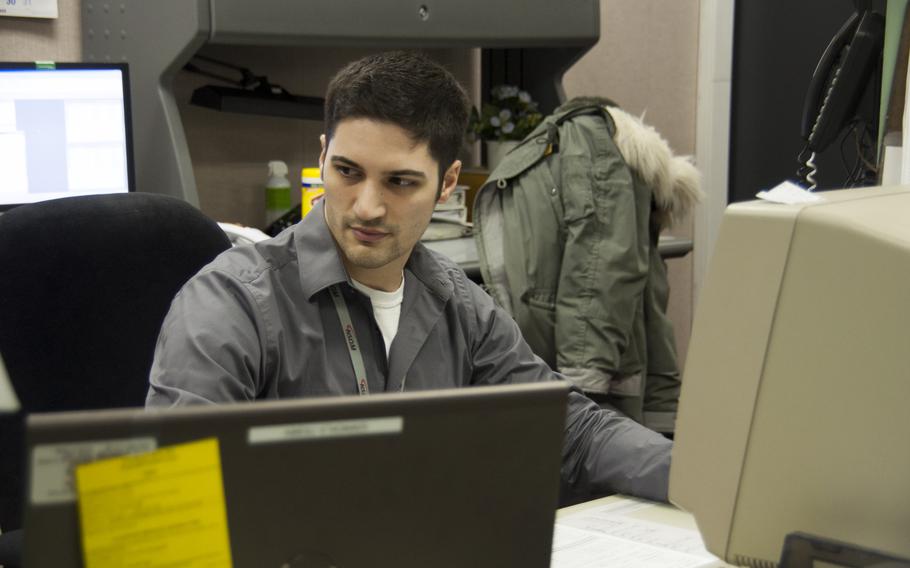 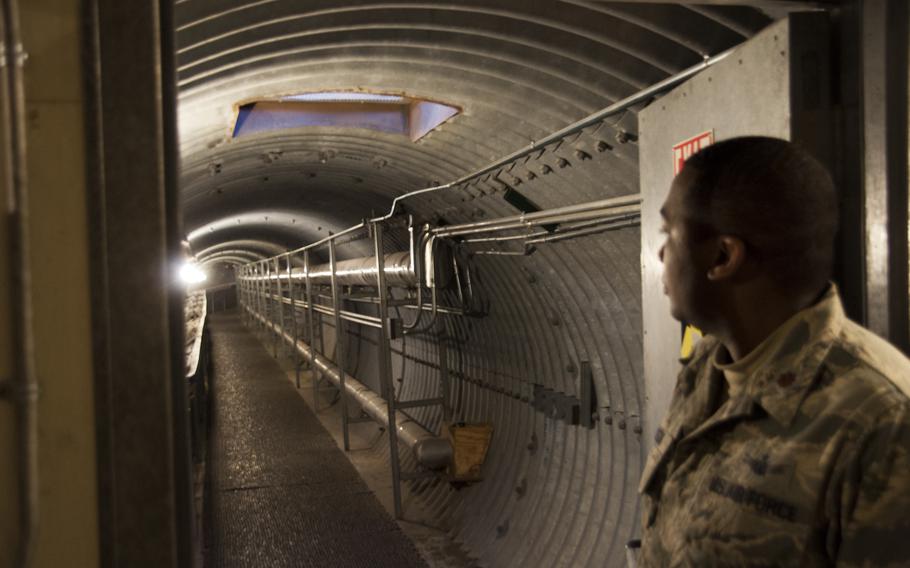 Maj. Paul Lawson explains one of the passageways between the operations building and one of the radomes on Sept. 30. The corrugated steel is necessary in Thule’s brutal climate, where there is no sun for four months a year and brutal winter storms appear with little warning. (Patrick Dickson/Stars and Stripes)

Even in good weather, drivers are required to radio in with the number of travelers and destination when leaving the base perimeter, marked with signs rather than a fence.

The changing conditions are of particular interest to the crew at the Ballistic Missile Early Warning System. They are on a mountain where the weather is crazier than down on the base, and they need to be manned 24/7, all year. No exceptions.

Maj. Chris Castle, the operations officer at BMEWS, said the weather can change in an instant.

“When that happens, we have to be prepositioned to ensure that we can continue operations,” Castle said, “because we can be severed from the main base for three of four days, so we have to keep an eye on the weather.”

Having two crews on site is essential.

“If it takes a turn for the worse, we bring up other folks to augment the ones who are here, send home people who don’t need to be here, and that way people can just rotate in and out here, without having to travel on the road,” he said.

Smokovitz recounted one such day.

“It was the day before or on Thanksgiving, and I got recalled,” he said. “That’s the thing with being on crew; if the weather gets bad or something bad happens, they can call you. You’re basically on six-ring standby; you’ve got six rings to pick up or you’re in some trouble.

“So, all right, pack your bags, quick quick quick, run out to the truck, and by the time we made it up to ‘12 Swiss’ (the 12th Space Warning Squadron) the weather just kept getting worse and worse as we went up the mountain.

“We should have pulled over and gone into the storm shelter,” he said. “I mean, we had the car in first gear; it was barely moving along. We just couldn’t see anything.”

Shelters dot the roads to the radars and North and South Mountains. Each has two beds, some food in a footlocker with a breakable seal, and a phone connected directly to a base operator. Best of all, there is a heater. The heat knocks you back when you open the door.

At 947 miles from the North Pole, Thule is closer to Moscow than to Washington, and without much land mass upwind, forecasting the weather is more a seat-of-the-pants operation than at just about any U.S. weather station.

Al Hay, 54, is a retired Air Force master sergeant. He has been a polar forecaster for 12 years and has been a contractor at Thule for two years. As the Air Force takes over forecasting at Thule, he’s returning to his roots, forecasting weather on the other side of the Earth — Antarctica. Hay is headed to McMurdo Station this month.

“We’re working here with minimal data,” he said. “In the States, you have a large network of radars … whereas up here, you got nothing; you got Baffin Bay. Nothing really local in our area.” Connecting all the buildings on Thule are utility pipes that carry everything normally run underground. On the permafrost, buildings are put on pilings so the heat from them, or from running water, doesn’t destabilize the frozen ground and tilt the buildings. (Patrick Dickson/Stars and Stripes) Al Hay, 54, a retired Air Force master sergeant, has been a polar forecaster for 12 years. He explained that the Thule weather station could not rely on developing systems from nearby stations, since there aren’t any. “In the States, you have a large network of radars,” he said, “whereas up here, you got nothin’; you got Baffin Bay.” (Patrick Dickson/Stars and Stripes) 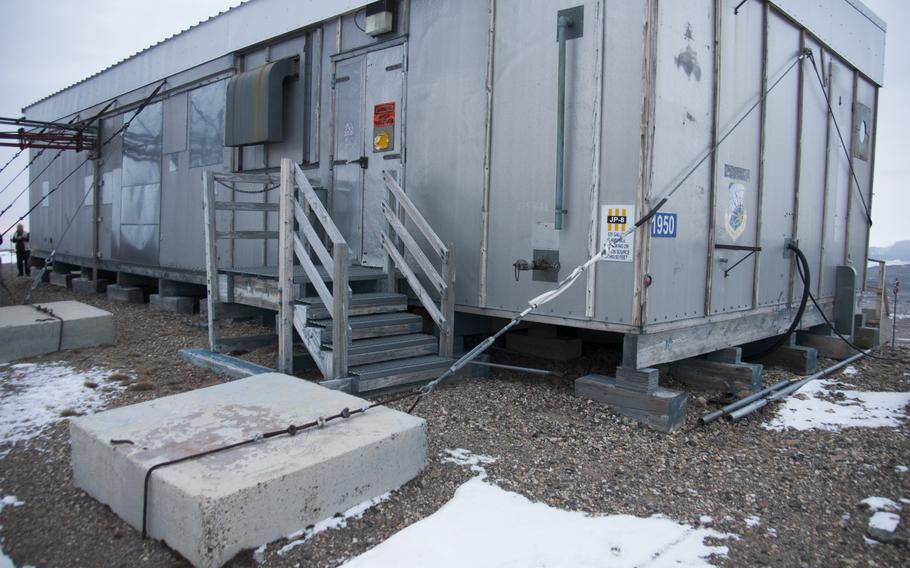 A retired radar on South Mountain near Thule Air Base, Greenland, was secured to the ground with steel cables. Wind can reach speeds of more than 200 miles per hour with little warning. (Patrick Dickson/Stars and Stripes)

Despite the lack of data, the weather guys must be ready to sound the alarm.

“We’ve got two main missions here: Resource Protection is going to be the populace of the base as well as the equipment,” he said. “We have a 30-knot warning for, like, not opening the hangar doors.

“The second one is going to be for the aircraft that comes through. We support anyone, from NASA, Canada, a lot of scientists; Ukraine comes through just for general exercises.”

Tech. Sgt. John Thompson III, 34, had been at Thule for three weeks.

“[Y]ou get into the storm season, the colder season, and [weather forecasters] get into notification of when there may be large storms, or hurricane-force winds, blizzards, whiteouts, things like that, that cause people to be relegated to their dorm with no movement. You don’t wanna head outside in something like that.”

Some years are bad. Siebert remembered one year with seven Charlie storms with some going into Delta; other years have one Charlie that lasts a few hours.

The base sits on permafrost, which is soil at or below freezing. All construction has to be raised so the heat of the building or pipes doesn’t melt the soil and destabilize the structure.

Pipes that cross streets arch over the traffic at 90-degree angles, and the superhighways of pipes between the barracks make for some of the ugliest landscaping imaginable.

When you’re aiming radars thousands of miles out, soil stability is crucial. Castle pointed out the cooling towers at the facility. 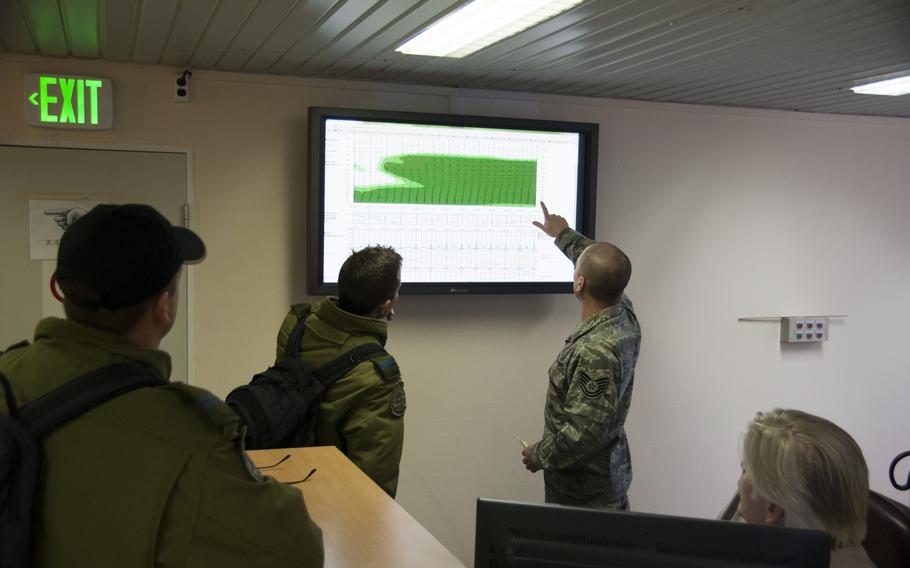 Tech. Sgt. John Thompson III, answers questions from a Canadian C-130 crew, who were hoping to fly to Canadian Forces Station Alert on Ellesmere Island in Canada. It was socked in that day. At lower right is forecaster Dave Siebert. (Patrick Dickson/Stars and Stripes) A group of Danish hikers stop near the Greenlandic ice sheet to grab some “blueberry soup” and an energy bar. The ice sheet covers more than 80 percent of Greenland, and rises to 2 miles thick at its peak. (Patrick Dickson/Stars and Stripes) 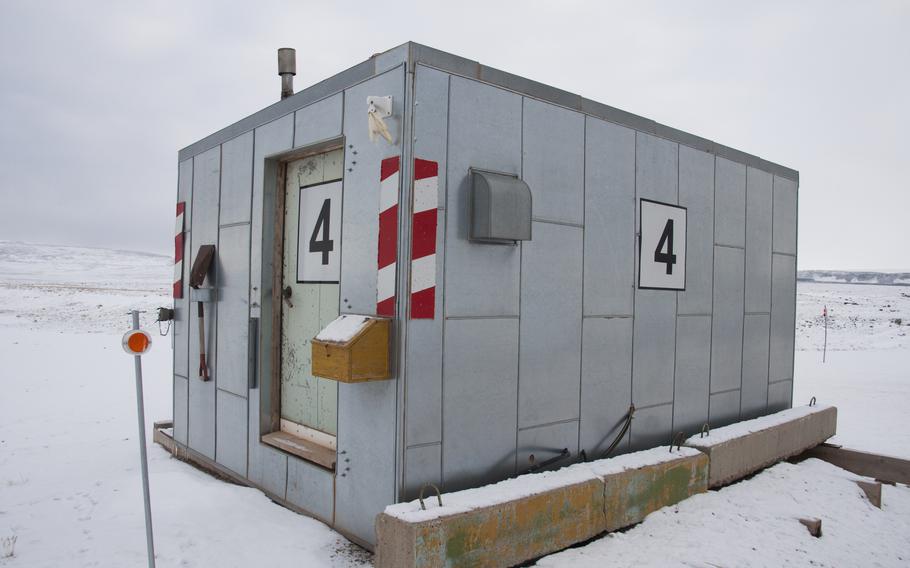 Storm shelters line the roads between the main base at Thule and the satellite sites a few miles away. Each has two beds, bedding, a foot locker with food, a propane heater and a direct line to the base operator to call rescue services. Winds and blowing snow can arrive with little warning, reducing visibility to zero. (Patrick Dickson/Stars and Stripes) 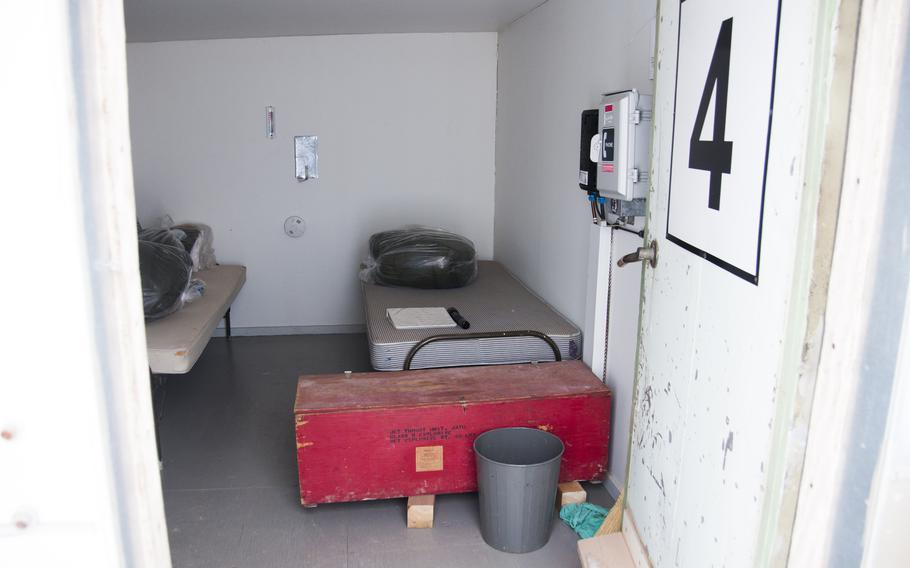 Storm shelters line the roads between the main base at Thule and the satellite sites a few miles away. Each has two beds, bedding, a foot locker with food, a propane heater and a direct line to the base operator to call rescue services. Winds and blowing snow can arrive with little warning, reducing visibility to zero. (Patrick Dickson/Stars and Stripes)

“To have a large-foundation building, very heavy and very large, especially something that’s producing a lot of heat … your building can settle and crack and move,” he said.

To cool the ground under the massive radar systems, an intricate cooling system was installed, he said, “which is really counterintuitive: Why would I have to cool something in Greenland? But they have to pump cold Arctic air constantly underneath that to keep it from settling.”

In October, the sun arcs low across the southern sky. You lose about a half-hour of light each day. In November, twilight gives way to constant darkness.

“Dark season was a little weird,” Smokovitz said. He arrived in October, working the midnight shift and sleeping during daylight hours until the sun set for good. “It was always dark, and I never saw anybody for months. … It’s awkward; your body is used to seeing the sunlight; used to seeing people.”

Full-spectrum lighting, which mimics sunlight and is sometimes used in the treatment of seasonal affective disorder, is available in the dorm rooms. Some airman gave the devices positive reviews, but everyone who’d been through one winter lit up when talking about the sun’s return.

“On Feb. 21, we had the ‘first light’ party. ‘The sun’s out! The sun’s back!’ Smokovitz said. The higher altitude at BMEWS gave the crew there a glimpse of the sun over the opposing mountains before the people on the main base saw it.

“We always referred to it as ‘hope on the horizon.”