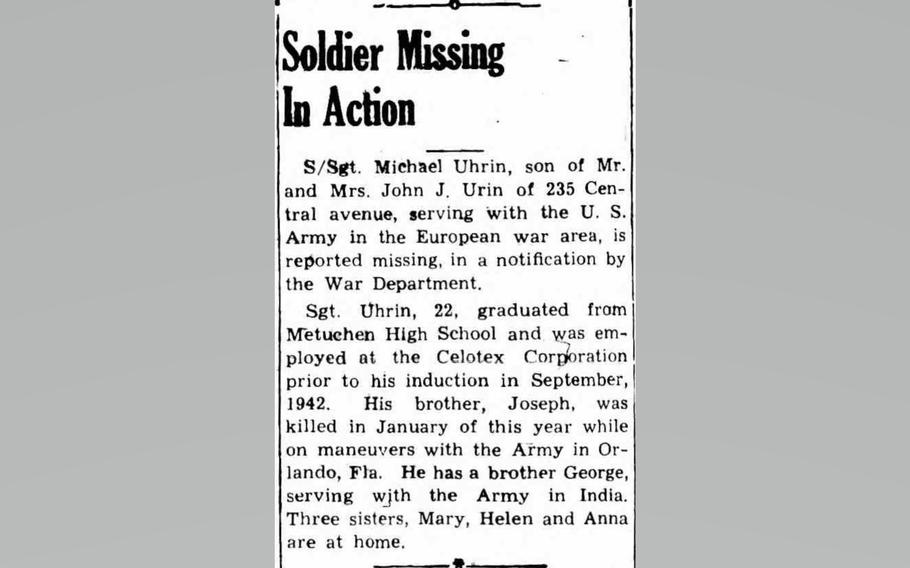 Sgt. Michael Uhrin, a 21-year-old from Metuchen, N.J., was declared missing in October 1943 after his plane was shot down by enemy fighters in Germany during World War II. (Defense POW/MIA Accounting Agency)

(Tribune News Service) — Growing up, Michael Joseph Uchrin didn’t know much about the uncles he was named after — Sgt. Michael Uhrin and Cpl. Joseph Uhrin.

He knew Joseph was killed in January 1943 while on maneuvers with the Army at Orlando Air Base in Florida.

There was more mystery surrounding what happened to Uchrin’s other uncle.

Whenever conversation in the home landed on the subject, Uchrin said his parents would only ever say he lost two uncles who served in the Army in World War II.

Sgt. Michael Uhrin, a 21-year-old from Metuchen, N.J., was declared missing in October 1943 after his plane was shot down by enemy fighters in Germany during World War II, according to military records.

The surviving crew members said Uhrin was killed before the plane crashed, and none witnessed him bail out. His body was not recovered.

Following the end of the war, the American Graves Registration Command was tasked with investigating and recovering missing American personnel in Europe. They conducted investigations in the area where Uhrin’s plane reportedly went down but couldn’t find any concrete evidence associating recovered remains with last airman.

He was declared non-recoverable in April 1955, according to the military.

Uhrin’s parents and five siblings — George, John, Mary, Helen, and Anna — would go the rest of their lives without closure.

As the years turned into decades, the family all but lost hope that Uhrin would ever be located.

That is, until Michael Joseph Uchrin (who spells his last name slightly differently than his uncle) was contacted in June 2021 by the Defense POW/MIA Accounting Agency for a DNA sample to compare with remains disinterred at the Ardennes American Cemetery, an American Battle Monuments Commission cemetery in Belgium.

Historians felt the remains may be Sgt. Michael Uhrin, but they needed DNA from his nephew to confirm it.

Michael Joseph Uchrin submitted a sample and didn’t think much of it until earlier this month, when the agency reached out again. A military representative would be visiting him at his home in Arizona, they said. He was told to set aside three hours for the conversation.

“I thought, ‘What are we going to discuss for three hours?’ ” Michael Joseph Uchrin recalled.

At the meeting he was told his uncle had been found. After nearly 80 years, the remains of Sgt. Michael Uhrin, were located, identified and coming home.

“We learned more from that one conversation than we ever learned growing up,” Michael Joseph Uchrin said. “It was just unbelievable, the research they had done was amazing.”

He learned that Uhrin was assigned to the 369th Bombardment Squadron, 306th Bombardment Group, 40th Combat Wing and 8th Air Force in the European Theater in October 1943, according to the Defense POW/MIA Accounting Agency.

Uhrin was serving as the radio operator in a B-17F Flying Fortress bomber on a mission to Schweinfurt, Germany, on Oct. 14, 1943. His plane was shot down by enemy fighters near Rommelhausen and Langenbergheim, Hessen — about an hour outside of Frankfurt.

Tragically, he was just one day short of being discharged, his nephew said.

Uhrin was one of many young men whose lives were cut short that day. Oct. 14, 1943, would later go down in infamy as “Black Thursday,” one of the bloodiest days for the U.S Army Air Forces in World War II.

Of the 291 bombers that departed on the mission to Schweinfurt that day, 60 were shot down, resulting in some 600 airmen killed, wounded or lost over enemy territory, according to military records from the National World War II Museum.

In the years since, the military has quietly been working to keep its promise of bringing the fallen back to their families.

Military historians have been conducting ongoing research focused on air losses over Germany. As a result, one set of remains, designated X-1660 St. Avold, was determined to be a strong candidate for association with Uhrin, military officials said.

That’s what prompted officials to contact Uhrin’s nephew last year for a DNA sample. A sample that would lead to long-overdue closure for the family, 79 years after his death.

“We never thought we could find his body,” Michael Joseph Uchrin said. “I thank them so much for their service.”

Uhrin will be buried at Hillside Cemetery in Metuchen in May 2023. He will be given a full service military funeral and, weather permitting, his nephew said the Army Air Forces will arrange for a flyover to honor the fallen airman.

Aside from Michael Joseph Uchrin and his two children, not many members of Uhrin’s family remain. Today, only a great-niece and a distant cousin live in New Jersey, the family said.

“Although Uhrin’s immediate family will never know that Michael’s remains would come back to Metuchen, it should give us all great comfort to know that our nation never forgot him and will continue to honor his legacy,” said Metuchen Mayor Jonathan Busch in a statement posted to social media.

In an interview with NJ Advance Media, Busch said he’s hoping to coordinate with the Department of Defense to hold the service for Uhrin on Memorial Day. He’d like to plan a big ceremony, where the whole community can learn more about Uhrin’s service and sacrifice.

“A story like this brings a sort of comfort to Metuchen that we didn’t even know we needed,” Busch said.