A resupply mission is carried out at Landing Zone X-Ray. (Joseph L. Galloway)

It was Sunday, Nov. 14, 1965, just after dark when I climbed aboard a Huey helicopter filled with crates of ammunition and hand grenades and hitched a ride into the pages of history. We were bound for a small clearing called Landing Zone X-Ray, where an understrength battalion of the 7th Cavalry Regiment was fighting for its life.

I had been in that small artillery firebase trying to find a ride into X-Ray most of the afternoon. Five other journalists had gathered there on the same mission, including my nemesis, Pete Arnett, of The Associated Press. But I had an edge on them. I had marched with Lt. Col. Hal Moore’s 1st Battalion, 7th Cavalry, troops three days before and I knew some of their faces.

A young captain hurried past and I recognized him. It was Capt. Matt Dillon, Moore’s operations officer. I grabbed him and told him I needed a ride to the battle. He told me he was taking two Hueys full of ammo to X-Ray as soon as it got dark, but he couldn’t take me unless Moore cleared it. I followed him to a radio tent and listened as he reported to his boss on the nighttime mission. Then he told Moore “that reporter Galloway wants to come along.” Moore’s reply, over the sounds of battle crackling on the radio: “If he’s crazy enough to want to come and you’ve got room, bring him!”

I hid out from the other reporters until near dark when they caught a chopper back to Pleiku and a hot meal, shower and a nice bunk. Then I climbed aboard that Huey, piloted by Maj. Bruce Crandall, and sat down on some ammo crates.

No question I knew where I was going and what waited for me there. I had overflown X-Ray early that afternoon with the 3rd Brigade commander, Col. Tim Brown. Smoke was rising 5,000 feet over a desperate battleground below. Moore was waving his boss off, warning that his command chopper with all its antennas would be a bullet magnet if we landed. As we circled overhead an A-1E Skyraider trailing a hundred yards of smoke and fire flashed below us. “Anyone see a chute?” someone shouted over the intercom. I leaned out and watched the plane crash into the jungle below. I clicked my mike and responded: “No chute! No chute! He rode it in!” Brown dropped me off at a landing zone near X-Ray. 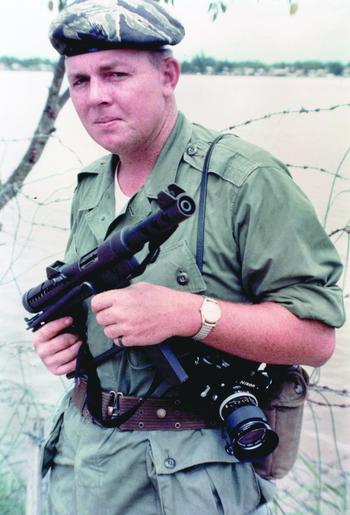 Before moonrise, we landed in the tall grass at X-Ray and bailed out, throwing the crates of ammo and 5-gallon plastic jugs of water out into the grass, and then fell flat as the two Hueys lifted off. In the silence and darkness we waited. Then came a gruff voice: “Follow me and I’ll take you to the CP. Watch where you step. There’s lots of bodies here and most of them are ours.” It was Sgt. Maj. Basil L. Plumley policing us up.

Plumley led the small party to Moore, who welcomed me and told me he could not guarantee my safety. I didn’t expect any such guarantee. I carried an M16 rifle on my shoulder, 20 loaded magazines in my pack, two Nikon F cameras, three lenses, lots of Tri-X and Kodachrome film. And I had an exclusive front-row seat at the biggest battle of the still-young Vietnam War.

With my back against a small tree, rifle and cameras on my lap, I waited through a long nervous night as the enemy probed our lines and a constant barrage of 105mm artillery fire impacted around us.

When the sun came up, I took stock of my surroundings. Moore and his small command group and their radio operators sat with their backs to a large termite mound, big as a Volkswagen and hard as concrete. Nearby was a makeshift aid station. Also nearby was a sobering sight: a long line of American dead, wrapped in their green ponchos, their boots sticking out the bottoms.

The colonel was making plans to send a strong patrol out to rescue a platoon of B Company that had been lured into an ambush and had withstood repeated enemy assaults all night long when fighting erupted along the Charlie Company line on the perimeter. Two battalions of enemy troops assaulted the thin line of Americans. Everything they fired that didn’t hit something seemed to be passing right through the command post area about knee-high. I rolled over on my belly and got real low to the ground as all that lead flew by. Suddenly I felt a thump in my ribs and turned my head carefully to see what it was. It was a size 12 combat boot on the foot of Plumley: “Can’t take no pictures lying down there on the ground, Sonny!” he shouted over the din of combat.

It had not escaped my notice that I was now with the 7th Cavalry, Custer’s old outfit, and chances were good that none of us would make it out of this place alive. So I got up and followed Plumley — a three-war Airborne and Infantry veteran from West Virginia — as he moved over to the aid station and addressed the battalion surgeon, Capt. Robert Carrara, and the medical platoon sergeant, Thomas Keeton: “Gentlemen, prepare to defend yourselves!” Plumley yanked out his .45 pistol and jacked a round into the chamber. Plumley was gathering a battalion reserve in case the North Vietnamese broke into the clearing.

Later that second day of battle an Air Force F-100 Super Sabre jet fighter dropped two cans of napalm right on the command post. By then I was sitting alongside the command group, backs to the termite hill. The first can passed right over our heads and impacted 15 or 20 yards from us, right where two engineers were standing. Then they were screaming and dancing in the flames. I got up and ran into the burning grass and helped carry Pfc. Jimmy D. Nakayama to the aid station. Nakayama, a native of Rigby, Idaho, died two days later. His wife, Trudie, gave birth to a baby girl that same week.

The fighting, sometimes hand to hand, would continue all this day and all night and into the third morning on Nov. 16. The American dead and wounded flowed into the CP area and the aid station. The helicopters, led by Crandall and his wingmate Capt. Ed “Too Tall to Fly” Freeman, braved the enemy fire bringing supplies and carrying out the wounded on mission after mission. Those two, Crandall and Freeman, would earn Medals of Honor long after the fact. Lt. Walter J. “Joe” Marm would earn his MOH taking out an enemy machine gun nest on the first day. 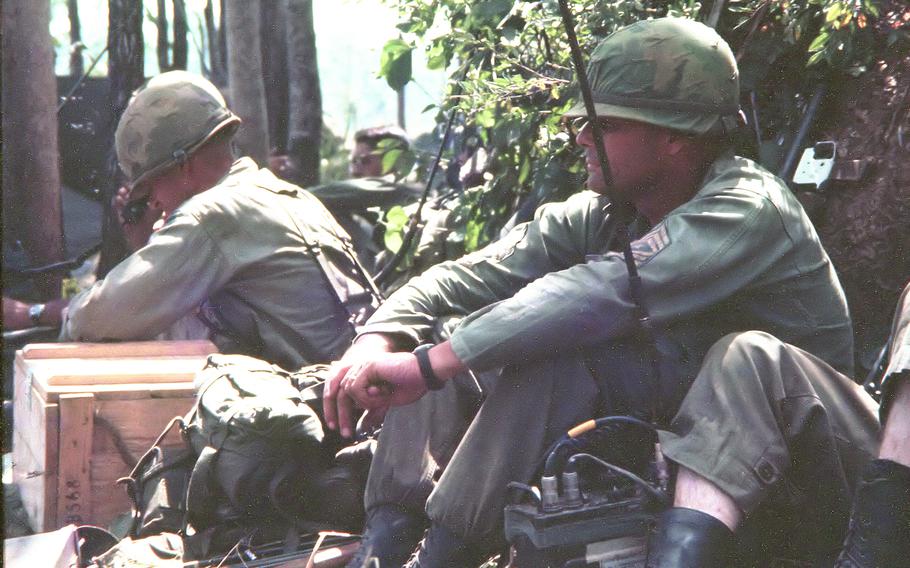 On the third day the survivors of the X-Ray battle were pulled back to Pleiku to rest and refit. The battalion had lost 79 troopers killed and over 120 wounded.

Our sister battalion, the 2nd Battalion, 7th Cavalry, held X-Ray that night, and on the morning of Nov. 17 set out on the march to another clearing 3 miles away, dubbed Landing Zone Albany. They walked into a hasty ambush by a fresh unit of North Vietnamese, and in six hours of horrific slaughter in the high grass and thick jungle, would lose 155 men killed and 130 wounded.

The 1st Cavalry Division (Airmobile) during that terrible November campaign in and around the remote Ia Drang Valley lost 305 troops killed in action and hundreds more wounded. It would go down as the bloodiest fighting of a war that would drag on for eight more years.

Not one of us who survived emerged the same as he arrived. The images of killing, dying and suffering indelibly marked us all. I left the X-Ray battlefield knowing that 79 young men had given their lives so that I might live. I left with a charge from Moore ringing in my ears: Go tell the American people what my troopers did here. Go tell them how my troopers died.

Moore and the 7th Cavalry battalions would fight on for eight months, and I would join them every chance I got. They were my brothers-in-arms, my blood brothers. They still are and will be always. I would go on to do a total of four tours in Vietnam; ride with the 24th Infantry Division (Mech) in the Gulf War; go into the Haiti incursion with Special Forces; and do two tours covering the Iraq War. I gave up my helmet and armor after the last tour in 2006.

Hal Moore and I became best friends, and eventually we researched and wrote “We Were Soldiers Once … and Young,” a book that told the stories of the battles of X-Ray and Albany, and “We Are Soldiers Still,” the story of our return to those two bloody battlegrounds in company with the North Vietnamese commanders who did their best to kill us all there 27 years before.

For we who survived, the days dwindle to a precious few. Each year there are fewer who answer the roll call at battalion reunions. Our good buddy, Sgt. Maj. Basil Plumley, died three years ago at 92.