From the archives, 2007: Ethiopians eager to learn from US soldiers 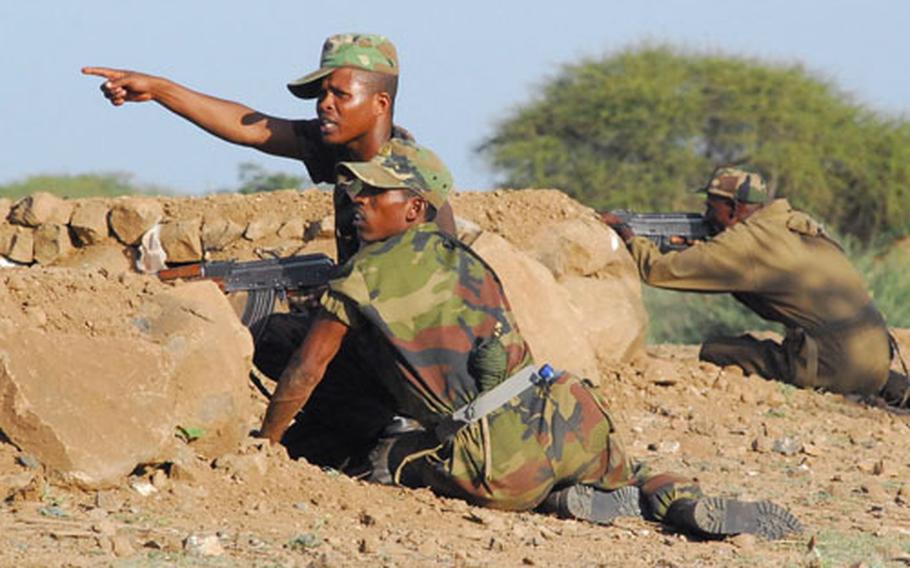 This article first appeared in the Stars and Stripes Mideast edition, Jan. 5, 2007. It is republished unedited in its original form.

"Tell 'em their heads need to be on a swivel," U.S. Army Sgt. Robert Conley yelled to the squad's Ethiopian interpreter.

"What?" said the interpreter, scrunching his face into a question mark.

"I need to tell them what?" said the interpreter, looking even more confused.

Conley, who has been training Ethiopian troops in basic infantry tactics here for the Combined Joint Task Force — Horn of Africa, raised his hand as if animating a sock puppet and rotated his wrist from side to side.

The interpreter looked on in silence.

"Tell 'em they need to be looking around," Conley said at last. 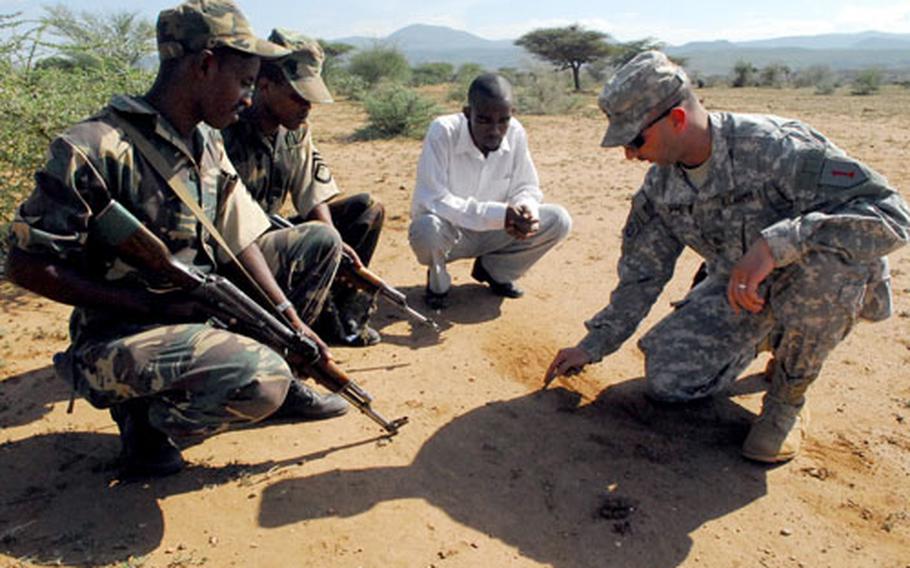 Military instructor and U.S. Army Sgt. First Class Bill Flippo, 27, of Winfield, Kan., illustrates a point by drawing in the sand while training Ethiopian army soldiers as a translator looks on. (Monte Morin/Stars and Stripes) Noncommissioned officers in the Ethiopian army listen to an instructor from the Guam Army National Guard at a U.S. sponsored NCO academy recently at the Ethiopian Training Academy in Hurso. (Monte Morin/Stars and Stripes) 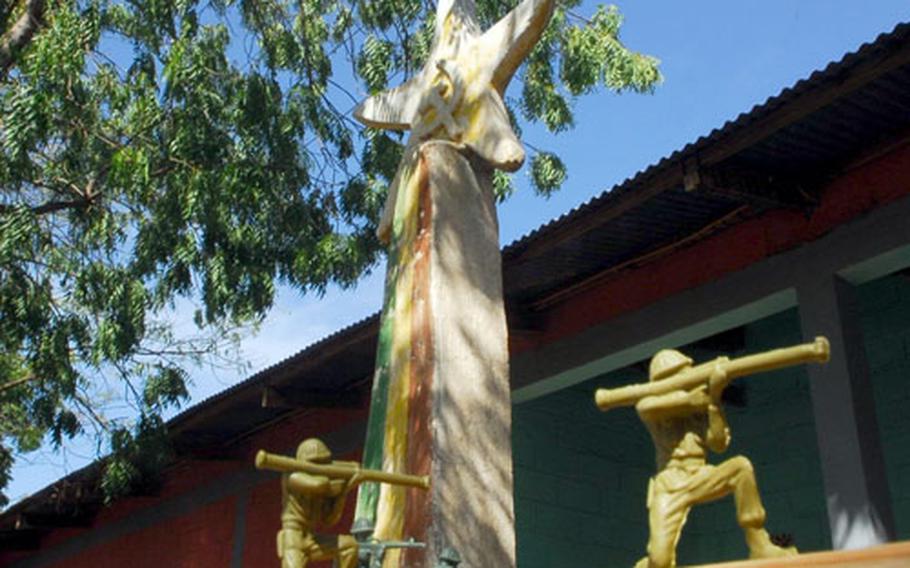 An aging Communist monument with hammer and sickle rises above a sand table where U.S. military instructors use toy soldiers to demonstrate military tactics and formations to Ethiopian soldiers. (Monte Morin/Stars and Stripes)

Language barriers notwithstanding, U.S. military trainers at the sprawling Ethiopian Training Academy in Hurso say they've been pleasantly surprised by how rapidly Ethiopian troops have taken to their instruction.

The so-called military-to-military training is part of a larger U.S. effort aimed at preventing Islamist militants from gaining a foothold in a region that has been plagued by poverty, armed conflict, drought and famine.

The training has taken on added urgency recently, with the Ethiopian military's battle against Muslim militants in Somalia, and the ongoing threat of war with its breakaway rival, Eritrea.

To be sure, Ethiopia has shown a historic eagerness to learn from many militaries, not just America's, and the story of its defense forces is the story of shifting global alliances.

More than a decade before the U.S. government identified Ethiopia, Kenya and Djibouti as allies in the global war on terrorism, the Ethiopian military took aid and instruction from the former Soviet Union, Cuba, North Korea, Yemen and a number of Eastern Bloc nations.

Yet Ethiopia's Cold War alliances were not always with the communists. At the very outset of the conflict, Ethiopia played host to thousands of U.S. military personnel who helped train and equip the East African nation's military and operated one of the world's largest radio relay and communications monitoring stations in the world.

The relationship between Ethiopia and the U.S. military began in 1953, when the two nations signed a defense pact that allowed the U.S. to operate the Kagnew Communications Station in Asmara, now the capitol of Eritrea.

For much of its 24 years of operation, the Kagnew Station hosted some 4,000 U.S. military personnel — more than double the size of the current Djibouti-based Horn of Africa task force.

Among other things, Kagnew relayed communications from Washington to U.S. troops during the Korean War and eavesdropped on Soviet Union outposts in the region during the Cold War.

By 1974 the U.S. government had supplied hundreds of millions of dollars' worth of aid and military equipment to Ethiopia.

However, the relationship between the two allies had begun to cool. Sgt. First Class Bill Flippo, 27, of Winfield, Kan., speaks through an interpreter while teaching basic infantry tactics to Ethiopian soldiers in the field at Hurso. (Monte Morin/Stars and Stripes) Ethiopian soldiers chant and pump their Kalashnikov rifles following a day of training in the field with U.S. military instructors. (Monte Morin/Stars and Stripes) An Ethiopian soldier waits in ambush during training with U.S. military instructors at the Ethiopian Training Academy in Hurso. (Monte Morin/Stars and Stripes) Ethiopian soldiers train with U.S. instructors recently at an Ethiopian base in Hurso. (Monte Morin/Stars and Stripes)

Advancements in satellite technology were eroding the importance of Kagnew Station, and the ouster of Ethiopia's Emperor Haile Selassie by a group of Ethiopian soldiers known as the Derg, or "committee," touched off a bloody purge in which thousands of Ethiopians were killed or tortured.

The Derg, a number of whom were trained by the U.S. military either in Ethiopia or in the U.S., adopted a communist form of government and turned to the Soviet Union, Cuba and other communist nations for military backing, equipment and training.

The regime then broke ties with the U.S. in 1977 and ordered all U.S. military personnel to leave the country.

The move triggered a peculiar Cold War flip-flop of allegiances.

By the late 1980s however, the Derg began to crumble with the fall of communism and growing insurgencies throughout Ethiopia, droughts and famine. In the wake of its collapse, Ethiopia's transitional government pledged that it would form a multi party democracy, while Eritrea became independent by 1993.

Today, the Ethiopian National Defense Forces consist of roughly 200,000 personnel, making it one of the largest militaries in Africa, and, in the eyes of U.S. policymakers, a force for stability.

Even so, reminders of Ethiopia's shifting military ties can still be found on military bases like the one in Hurso.

In the tiny, fenced compound where U.S. military trainers live and teach, a weathered concrete monument bearing Ethiopia's national colors and a communist hammer and sickle stands behind a row of Soviet-constructed block houses that now serve as classrooms.

"That's pretty old," a Guam Army National Guardsmen said of the monument recently. "Everybody likes to get a picture of that."

US trainers prepare Ethiopians to fight