US trainers prepare Ethiopians to fight 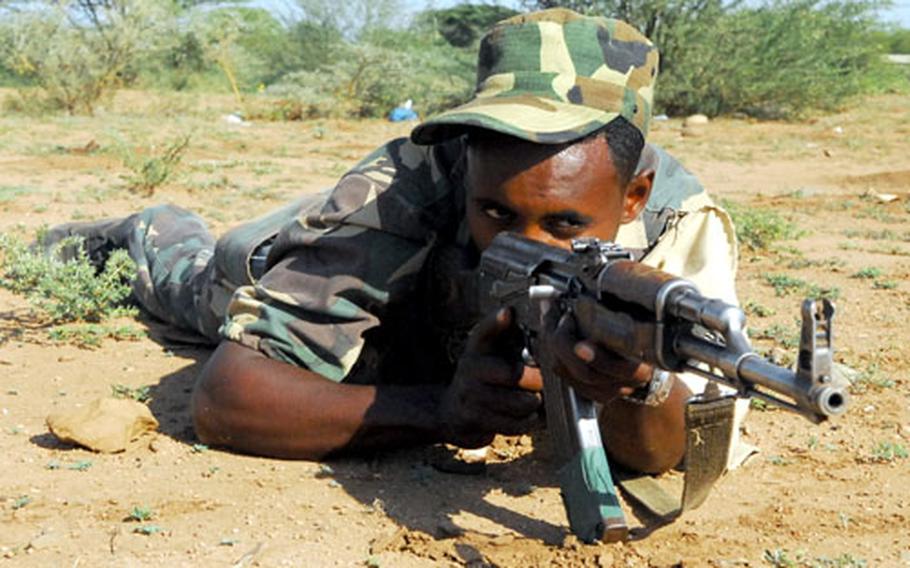 An Ethiopian soldier waits in ambush during training with U.S. military instructors at the Ethiopian Training Academy in Hurso. (Monte Morin/Stars and Stripes)

DIRE DAWA, Ethiopia — As soldiers of Ethiopia’s Christian government continued to rout Islamist militiamen in southern Somalia this week, 2nd Cpl. Wonderfraw Niguse celebrated his own victory on the parched scrublands of eastern Ethiopia hundreds of kilometers to the north.

With the sporadic barking of baboons or braying of donkeys in the distance, the 25-year-old squad leader led two successful ambushes against simulated enemy forces here as his fellow trainees charged through thickets of needle-sharp thorn bushes and down dried river beds.

The feat, which Wonderfraw and his fellow soldiers cheered with songs of victory and courage, was accomplished during a three-month basic infantry skills course offered by the U.S. military at the sprawling Ethiopian Training Academy in Hurso.

“They are very good, these techniques that they are teaching us,” Wonderfraw said through an interpreter. “I appreciate everything they are teaching us, especially the ambush. They instruct us on how to establish it and provide security. The ambush is very interesting for me.”

Troops attached to the Combined Joint Task Force Horn of Africa have been training Ethiopian soldiers in basic infantry tactics, officer logistics and maintenance since 2003, when the U.S. government identified the East African country as an ally in its global war on terror. Similar training programs are ongoing in Djibouti and Kenya.

In Hurso, the so-called military-to-military training has taken on a new urgency in the days following Ethiopia’s incursion into Somalia on behalf of that collapsed nation’s embattled, albeit U.N.-sanctioned, government.

“Depending on whether things really kick off, it’s a very real possibility that some of these guys could find themselves using these skills very soon,” said Sgt. 1st Class Bill Flippo, an instructor based at Camp Hurso.

“You want to make sure you cover everything thoroughly,” the 27-year-old Winfield, Kan., native said. “The stuff you teach them could result in things working out really good for them, or really bad.”

Flippo is one of a handful of instructors here who belong to Company A, 1st Battalion, 16th Infantry Regiment, 1st Brigade, 1st Infantry Division. The instructors, who are three-quarters of the way through a yearlong deployment, are currently training more than three dozen Ethiopian army officers, noncommissioned officers and enlisted from throughout the country.

“The majority of these guys are trainers themselves,” said 1st Lt. Ben Daughters, 24, of Chillicothe, Ohio. “The idea is that we train them and they go back and train their own.”

Roughly 60 U.S. personnel reside at Hurso, most of them soldiers from the 1st Battalion of the 294th Infantry Regiment of the Guam Army National Guard. The guard unit is now on its third, yearlong rotation in the Horn of Africa, and is scheduled for a fourth.

“They love us here because we interact a lot with the locals,” said Chief Warrant Officer 2 Noel Camagaganacan, 40, of Dedeo, Guam.

U.S. instructors operate from a very small, fenced compound deep within the Ethiopian Training Academy, which itself encompasses miles of sparse scrub and rocky mountain ranges teaming with wildlife.

The barracks and classroom buildings were constructed by the former Soviet Union, a financial and military ally of Ethiopia’s ousted Derg regime. Concrete monuments bearing the communist hammer and sickle can still be found on base.

Among the minor diversions available to soldiers here is the feeding of dozens of hawks that circle and swoop over the compound daily. A pastime among the Guam Army National Guardsmen is to toss cooked hamburger patties or fried buffalo wings into the air and watch as the hawks attempt to catch them in their talons or swoop down and grab the chunks of meat that have fallen to the ground.

While the trainers at Hurso were not immediately aware of Ethiopia’s plans to wage war on southern Somalia’s Islamist militiamen, they did notice a sudden increase in troops at Hurso, as well as other preparations. It was roughly two weeks ago when soldiers here watched as Soviet-built Hind helicopters belonging to the Ethiopian Defense Forces fired rockets into the mountains on the edges of the camp.

“We were wondering, ‘why are they doing that,’” Flippo said. “Then a week later the war kicked off.”

Horn of Africa mission plays role in war against militants

The mission of the Horn of Africa task force is to prevent Islamist militants from establishing a foothold in a region whose widespread poverty, instability and lack of food and water make it a potential breeding ground for terrorists.

U.S. policymakers and commanders point to the 1998 bombings of U.S. embassies in Kenya and Tanzania and the 2000 bombing of the USS Cole in Yemen, as well as the fact that the Sudan once played host to Osama bin Laden, as symptoms of the region’s instability. They hope to disrupt militant activities here by strengthening allied governments with military-to-military training and by sowing goodwill among East African nations with well-drilling operations, humanitarian aid missions and civil affairs projects.

Like nearly all of those U.S. military personnel who are deployed to the horn, soldiers such as Sgt. 1st Class Bill Flippo, an instructor based at Camp Hurso, and Sgt. John Coleman, 27, of Chicago, knew little of the area or why they were being sent there.

“When they told me I was coming here, I thought ‘what the hell’s in Africa,’” Flippo said.

Now however, the instructors say they find their work very rewarding.

“I’m all for drilling wells and building schools, but I feel that what I’m doing now is really helping to fight the war on terror,” Flippo said. “The knowledge we are giving to these soldiers is what they will use if they go fight in Somalia, Eritrea or wherever. On top of that, it’s a lot of fun.”

Flippo and Coleman said they were continually impressed by the Ethiopians’ willingness to learn. Both soldiers served in Iraq, where they dealt with what was then called the Iraqi Civil Defense Corps, the precursor to the Iraqi Army, and were frustrated by the experience.

Where soldiers in Iraq seemed reluctant to learn or were unmotivated, soldiers in Ethiopia picked up quickly on classroom instruction and relished the opportunity to train in the field.

“In Iraq, they don’t have any sense of country,” Coleman said. “Here, it’s different. Ethiopia was never colonized. They fought off the Italians with swords and bows when Italy had tanks and planes. They are very motivated and they are strong. You don’t mess around with Ethiopia.”