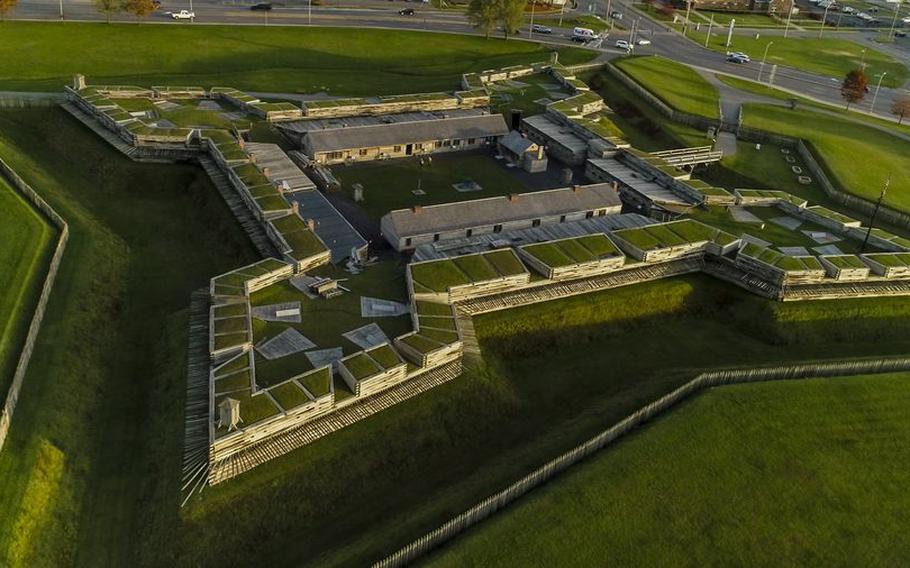 Fort Stanwix in Rome, N.Y. is attributed to being the first location to fly the American flag during the Revolutionary War. (N. Scott Trimble, Syracuse.com/TNS)

(Tribune News Service) — When British officers at Yorktown yielded their flags to the colonial army to end the Revolutionary War in 1781, it wasn’t George Washington or Alexander Hamilton who accepted the surrender.

It was an 18-year-old from Fort Stanwix in Rome, N.Y. — a man who would later rise to prominence in Manlius, N.Y. as the village postmaster.

That man, Robert Wilson, was the youngest officer ever commissioned in the Continental Army. When it came time for the British troops to surrender their colors, he was the man to collect the flags.

Records at the Onondaga Historical Association say that Wilson was born in New York City, one of six children. No date was given of his birth, but it was probably around 1763.

Driven out of the city when the war between the American colonies and Great Britain started, his mother brought the family to Albany.

A 1967 article in The Post-Standard said that he “grew up in a rough and hardy style along the Mohawk Valley.”

Wilson was said to have “idolized” his great uncle, Captain. James Gregg, who held a command at Fort Stanwix in Rome.

He enlisted in the Army, either at the age of 12 and 13, and served as a fifer with New York troops there.

He had an early close call with danger, when he was to join Gregg and another man on a pigeon shoot outside the fort’s walls.

Luckily for him, Wilson was sent back to the fort by his uncle just before they were ambushed by a band of American Loyalists and Native Americans who were fighting with the British.

Gregg was severely wounded but survived.

Fort Stanwix is known as the “fort that never surrendered,” and the small American army withstood a British siege there in August 1777.

According to local folklore, the first American flag to see action in battle was at Stanwix during the siege.

The homemade standard, allegedly made from a captain’s blue jacket, a white ammunition shirt, and a woman’s red petticoat, was raised on August 3, 1777, and Robert Wilson, just 14 years old, played a drum beneath it.

The battles at Stanwix, Oriskany and Saratoga in Upstate New York turned the tide of the Revolution and convinced France to aid the American cause.

After the fort was abandoned after a fire in May 1781, Wilson was commissioned as an ensign in the 1st New York Regiment.

At 18 years old, he became the youngest commissioned officer in the American army during the Revolution.

A Navy term today, during the Revolution ensigns “had charge of the colors.”

Wilson was at Yorktown, Va. on Oct. 19, 1781, when British General Charles Cornwallis surrendered his army of 8,000 men to George Washington, effectively ending the war.

At the formal surrender, 28 British officers were to hand over 28 flags to 28 American officers.

Colonel Alexander Hamilton, from Washington’s staff, appointed Wilson to conduct this part of the ceremony.

In his 1851 book “The Pictorial Field-book of the Revolution,” historian Benson John Lossing gives the best account of what happened:

“When Wilson gave the order for the British captains to advance two paces, to deliver up their colors, and the American sergeants to advance two paces to receive them, the former hesitated, and gave as a reason that they were unwilling to surrender their flags to non-commissioned officers. Hamilton, who was at a distance, observed this hesitation and rode up to inquire the cause. On being informed, he willingly spared the feelings of the British captains, and ordered Ensign Wilson to receive them himself, and hand them to the American sergeants.”

Wilson accepted all 28 flags and distributed them to each of his comrades, “to the satisfaction of all.”

After the war, Wilson received a grant of two military lots for his service in Ovid and Locke but chose instead to live in the fledgling village of Manlius.

He became a prominent member of the young settlement. He was its Justice of the Peace, the director of the Cherry Valley Turnpike, and, from 1803 to 1811, he served as the village’s postmaster.

(In 1938, when Manlius celebrated National Air Mail Week, a drawing of Wilson conducting his duties at Yorktown was chosen for the village stamp.)

In 1811, while traveling on business to Utica, Wilson was “attacked by a fever” at New Hartford and died on May 13. He was buried there.

In May 1862, during the Civil War, Robert Wilson’s grandson, who was named after his famous grandfather, an Adjutant in the 16th New York Regiment of the Army of the Potomac, was at Yorktown helping push Confederate forces back towards Richmond.

“It is not a little remarkable that the grandson should be engaged in a campaign on the very spot where his ancestor met the enemies of his country, and like him, a witness of their discomfiture,” The New York Tribune said.