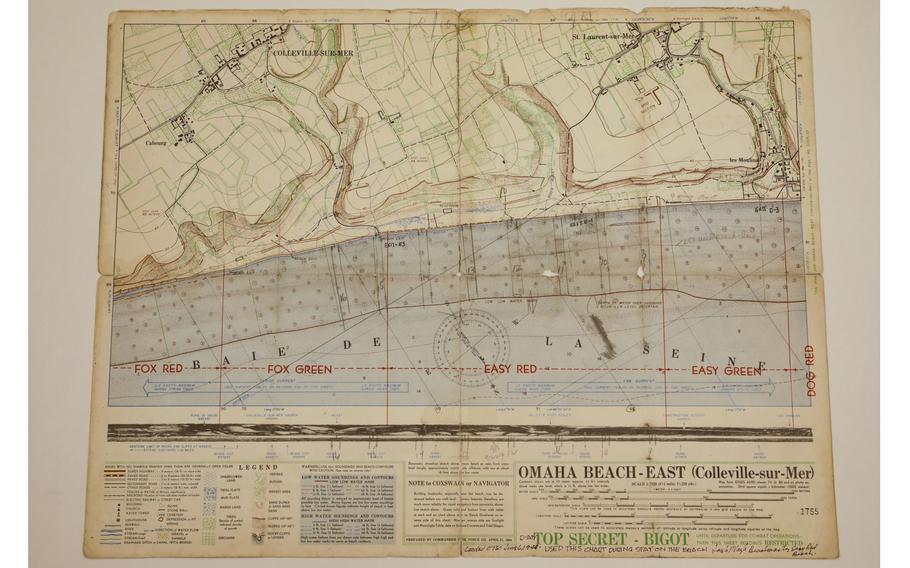 The map Joseph P. Vaghi Jr. carried during WWII’s D-Day landing at Normandy. BIGOT, shown on the map, according to many sources, was a code name for Operation Overlord and stood for “British Invasion of German Occupied Territory.” (Maansi Srivastava/The Washington Post)

It was stuffed in a pocket of his overalls as he hurried across the Normandy tidal flats under enemy machine-gun fire.

The map made it through the explosion of an enemy artillery shell that killed a comrade and set Vaghi’s clothes on fire.

And it lasted with his penciled notations intact as he directed men coming ashore in France on D-Day, June 6, 1944, yelling into his megaphone: “Move Forward!”

Joseph P. Vaghi Jr., a Bethesda, Md., architect who died in 2012 at the age of 92, cherished the map in the years after the war. Its meticulous detail had saved his life, he told his family.

On June 27, Vaghi’s family formally donated the map to the Library of Congress, where it was hailed as a rare artifact from one of World War II’s most historic events.

It also includes a sketch at the bottom of what the terrain looked like from an approaching landing ship.

More than 2,500 Americans were killed that day, along with 1,913 British, Canadian and other allied soldiers and sailors, according to the National D-Day Memorial in Bedford, Va. 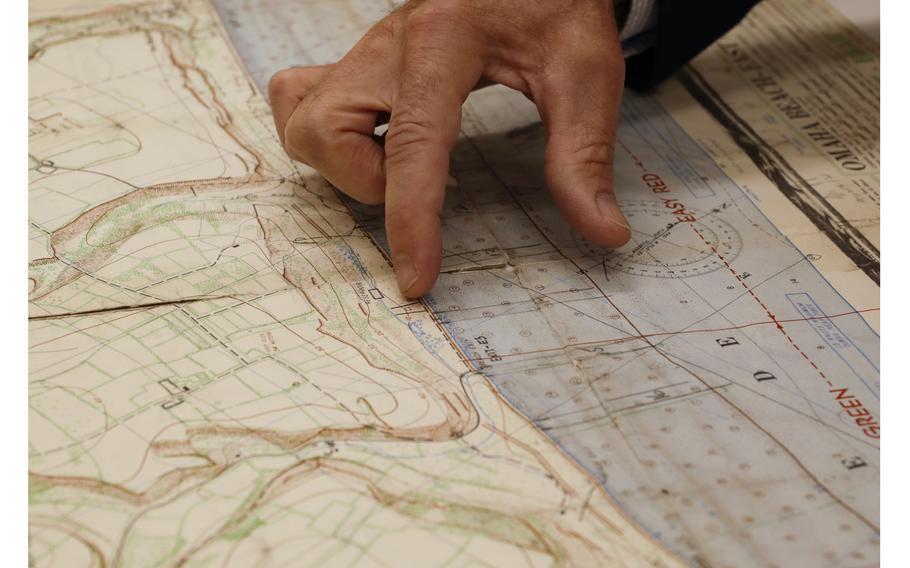 It seemed a miracle that Vaghi survived, a Navy buddy later told his son.

“It was almost like something protected him,” Vaghi’s son, Joseph P. Vaghi III, said his father’s friend related. “He was a tall man. ... He had a megaphone. He was up and down the beach. ... How he didn’t get killed no one knows to this day.”

Vaghi, a lieutenant commander, was a Navy “Beachmaster.” Equipped with his map and other equipment, his job was to direct the traffic of thousands of men and tons of material pouring onto the beach amid the enemy’s artillery and machine-gun fire. He was 23.

The military map he carried, based on intelligence and low-level reconnaissance flights, was labeled “TOP SECRET” in green letters.

The D-Day landing area on the northwest coast of France, where the allies assaulted occupying German forces in 1944, was divided into five beach sectors code named Omaha, Utah, Gold, Juno and Sword.

The beaches were divided into smaller sectors such as Easy Red, Easy Green and Fox Green. The maps were designed to guide soldiers and sailors to the proper landing zones and give them an idea of the lay of the land once they arrived.

Easy Red was defended by three German bunkers, two of which were made of stone and concrete, according to historian Peter Caddick-Adams.

“The Germans were in their pillboxes and bunkers high above the beach on the bluff and had an unobstructed view of what we were doing,” Vaghi recalled in a later account for the U.S. 6th Naval Beach Battalion website. “The atmosphere was depressing.”

The map still has the pencil notations he made.

“LCI will beach here,” he scribbled on one spot, referring to the Landing Craft Infantry vessel that was to land him and others, not far from where the Normandy American Cemetery is today.

Morris said, “All these pencil annotations are contemporary, and he would have made them either prior, probably just prior, in preparation for the landing.”

The map is in color, printed on two sides, and is creased and tattered with age.

“He was a survivor,” Morris said as he recently examined the map in a library vault. “And this is a survivor.”

“We have a lot of maps relating to wars, obviously,” he said. “War is a great mapmaking business. But to my knowledge we have none that actually we can document went on to D-Day. That’s what makes this a particularly special piece.”

“Thankfully, he was a chronicler,” Morris said. “This guy knew he was a part of something.” 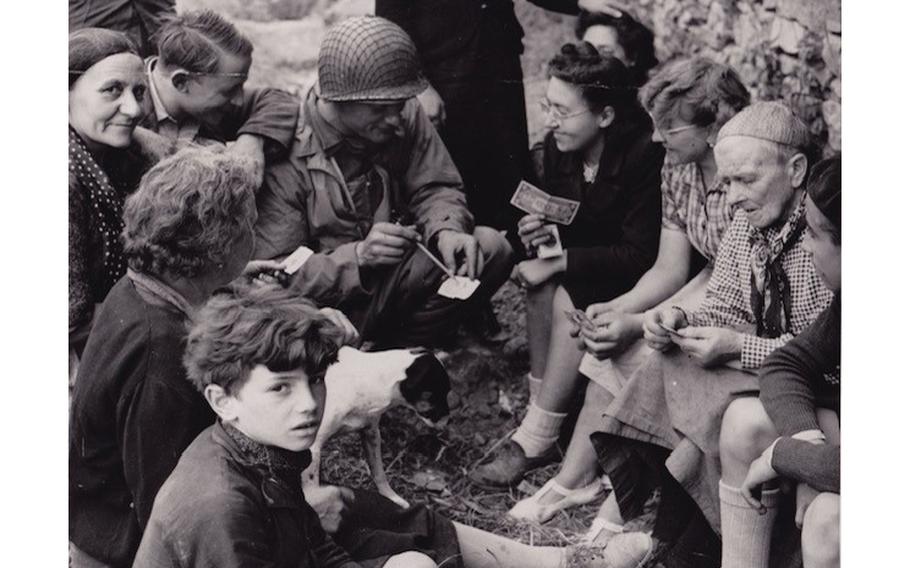 Vaghi was one of the nine children — six boys and three girls — of Italian immigrants from Bethel, Conn. After the war he studied at Catholic University, became an architect and lived in Kensington, Md., in a house he designed and helped build.

He and his wife, Agnes, raised four boys there.

“Growing up we never talked about the war, never,” he said.

“When he came back, he wanted to move on with his life,” the younger Vaghi said. But if he heard fireworks or a loud bang “he would jump a mile.”

“The map was the one thing that he said: ‘The most important thing in my life besides my wife and my kids has been this map. It got me on that beach, and got our group on that beach safely that day,’ “ the younger Vaghi said.

After his father died, his son stored the map in a bank safe-deposit box. He had been wondering what to do with the map for years. A family acquaintance, Tom Liljenquist, an important Library of Congress donor, suggested the library as a home.

Vaghi said his father had considered donating the map to several other institutions but couldn’t decide. He said his father gave him the map and said, “Hang on to it. At the right time you’ll know it.”

“As fate would have it, there’s no better place in the world than the Library of Congress,” he said.

The family is also donating a special log book his father kept with detailed information about his men, and a large batch of postwar letters, papers and reminiscences.

A few years before he died, the elder Vaghi got out the old map and wrote a notation on it:

The Washington Post’s Magda Jean-Louis contributed to this report.