Town of Corona, NM, overshadowed by Roswell when it comes to 1947 UFO incident 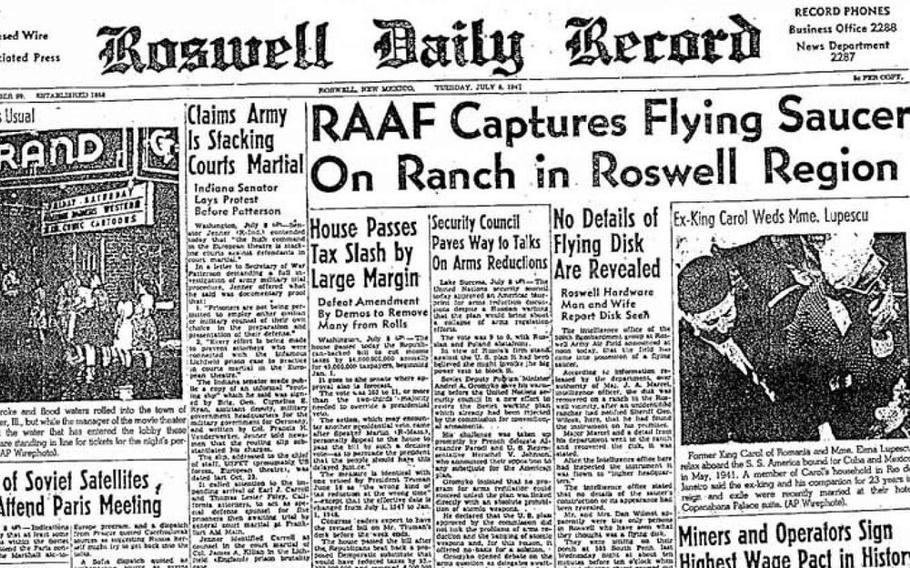 On July 8, 1947, a headline in the local paper in Roswell, New Mexico ignited 70 years of “flying saucer” sightings. (National Archives)

CORONA, N.M. (Tribune News Service) — They say something crashed out here in the desert.

Something weird, maybe something from another planet. Definitely something the U.S. government has never fully explained.

When it happened, 75 years ago this summer, many called it a flying disc or flying saucer. Today, the sometimes-rocky plain about 25 miles southeast of Corona looks like any other piece of New Mexico desert — desolate, uninhabited, untouched by man or machine.

While the alleged crash has come to define the New Mexico city of Roswell — awash in UFO enthusiasts this weekend — it has somehow neglected to honor Corona, a ranching village of fewer than 170 people that actually had dibs on the event.

But maybe that’s how it should be, several Corona residents said recently.

A drive down its main street revealed almost no hints of the historic wreck, though the alien dummy standing in an old pay phone booth outside the Corona Motel might ignite a visitor’s interest in the subject.

Guiding visitors around the Corona Museum of Frontier Life, which does not have one artifact related to the 1947 crash, 84-year-old volunteer Mary Seely said she has not had one person ask her about the crash — an event that continues to fascinate stargazers, skeptics, believers and those who like the idea of seeing little green men.

“They tell me they like it that way,” she said of Corona’s residents.

Tracie Proctor Gallegos is one of those folks. Though she lives in nearby Encino now, the Corona native said that as she watches the curious descend on Roswell every year for the annual UFO festival, she feels a sense of relief.

“The majority of Corona residents would probably agree that the fact that Roswell took the claim to fame and everything is actually all right,” she said.

Gallegos has a personal tie to the 1947 event, now commonly known as the Roswell Incident. Her grandmother, Loretta Proctor, was the next-door neighbor of rancher William “Mack” Brazel, who first reported finding wreckage debris left on the Corona desert floor early on a July morning.

Loretta Proctor’s son, known as Dee, accompanied Brazel on his morning review of the nearby Foster Ranch to check on potential damage from a thunderstorm that took place the night before.

The story, reported in many a book about the incident, including the 1992 tome Crash at Corona, by Don Berliner and Stanton T. Friedman, says Brazel brought pieces of the wreckage he collected to the Proctors’ home for examination — making them eyewitnesses to at least one part of this chapter of history.

All this within 30 miles of Corona, once was a railroad stop with much more activity than it has today. The town is about 100 miles from Roswell, which then housed the Roswell Army Airfield, which later became Walker Air Force Base.

But it was because the military stepped in and took control of the investigation and materials from the crash — and maybe, some stories say, retrieved some alien bodies from the incident — that the larger town of some 48,000 people slowly became enmeshed in UFO history.

“ Roswell got in first ... embraced its history,” said writer and investigator Nick Pope, who, as a civilian, investigated UFO reports for the United Kingdom’s Ministry of Defense.

Pope, one of the featured speakers at this year’s UFO fest in Roswell, which started Friday and ends Sunday, said Roswell is entitled to the fame because “the wreckage was taken back to the base.”

How or why that part of history got lost does not seem to be important to many who attended this year’s festival, which drew about 10,000 people on its opening day Friday.

The truth is, most people in Corona and Roswell really didn’t pay too much attention to the 1947 incident until about 1980, when authors Charles Berlitz and William L. Moore published The Roswell Incident, which included the first reported interviews with some of the key players in the saga.

Gallegos, who was born in the late 1960s, said she grew up with no knowledge of the crash until the book came out.

“It was not something they talked about in common conversation: ‘Oh yeah, we had this UFO crash right here in our backyard,’ “ she said.

“When that book was released and it was just a hit and everybody started looking into the actual crash and what really happened and the cover-ups and so forth — that’s when my granny became a celebrity,” she added.

Dee Proctor’s son, Todd Proctor, said his father, who has since died, did not talk about his ties to the crash. He would generally say, “I was 8 years old, and I don’t remember much about it,” Todd Proctor said.

His grandmother “didn’t talk a whole lot about it” either, Proctor recalled, though sometimes she would remember examining the debris material Brazel brought to her house that summer day.

She described it as a “weird material they had never seen before ... pliable but strong,” Proctor said.

Todd Proctor said it made sense Roswell got all the glory — if that’s what you want to call it — especially as Corona, like so many small rural New Mexico communities, “began dying on the vine” sometime in the 1970s or 1980s.

At about that time, the UFO craze began kicking in.

And while Corona geared down, Roswell kicked up.

In 1992, the International UFO Museum and Research Center opened on Main Street in Roswell in a former movie theater. Four years later — on the 49th anniversary of the incident — the town and various entities organized the first official UFO Festival.

Since then, Roswell has stamped itself with an identity forever linked to the 1947 event. Its high school teams have names like Coyotes and Rockets and Colts, but to the world, Roswell is symbolized by an alien.

“If that incident did not happen, I don’t know if we [ Roswell] would be known worldwide,” said Juanita Jennings, a city spokeswoman.

For Roswell, the move has paid off. Jennings cited a 2019 market research study of the festival’s financial impact on the city. That year, the event delivered $11.5 million in economic development and drew 11,500 people.

The three-day event always leads to sold out hotels, packed restaurants and sidewalks full of vendors selling items often linked to UFOs. You can find little green men on T-shirts, hats, earrings, backpacks, coffee mugs and a big one holding up the sign at the Roswell Dunkin’ Donuts outlet.

“This is our biggest weekend of the year,” she said. “Local businesses produce more revenue in three days than they do in three months.”

The 1947 incident still fascinates people, Pope said, because it is “the literal Ground Zero of modern UFO mysteries.”

That saga includes a potential government cover-up, military reports that the flying saucer was just a weather balloon gone awry in the storm and conspiracy theories saying the military has spent decades covering up what is a legitimate flying saucer crash.

Corona does not seem to be green with envy, though Roswell is probably green with the color of the money the UFO phenomenon pours into its coffers.

Jennings likened the weekend celebration to “three Black Fridays” in a row for local businesses.

Corona, meanwhile, seems quite content with the drive-through business it gets from truckers, temporary employees working on local construction or solar power projects — and the occasional Roswell UFO historian who has heard Corona played a role in history.

Rhonda Oord, who runs the Corona Motel — which does boast one alien-themed room for guests — said just the night before she had hosted a couple of people heading to the Roswell UFO festival.

“When we tell most people the crash was near here, they are very surprised,” she said.

She said this village with no stoplights, no lines in its lone local grocery store and not much business activity past 6 p.m. appeals to her sense of laid-back quietude.

Another resident described Corona as a modern-day “Mayberry,” referring to Andy Griffith’s long-running 1960s television comedy series about a small fictional town where everybody knew everybody, and everybody liked it that way.

Seely, who was born and raised in Roswell and worked a ranch in the area for decades, can tell stories of seeing strange lights in the sky and of U.S. military operations playing out on her backyard in the 1950s, 1960s and 1970s.

“A UFO doesn’t mean outer space,” she said. “It means you don’t know what it is.”

Then she added: “Something happened. But nobody knows what.”

Walking around the museum of relics that attract those who search the skies for signs of visitors from other planets, Seely said she was both amused and amazed Roswell has capitalized on the incident to the degree it has.

Still, she said she harbors a dream that those people will channel their energies into more important activities.

“I always wondered what it would be like if people who show up for that festival went to a prayer meeting,” she said with a laugh.