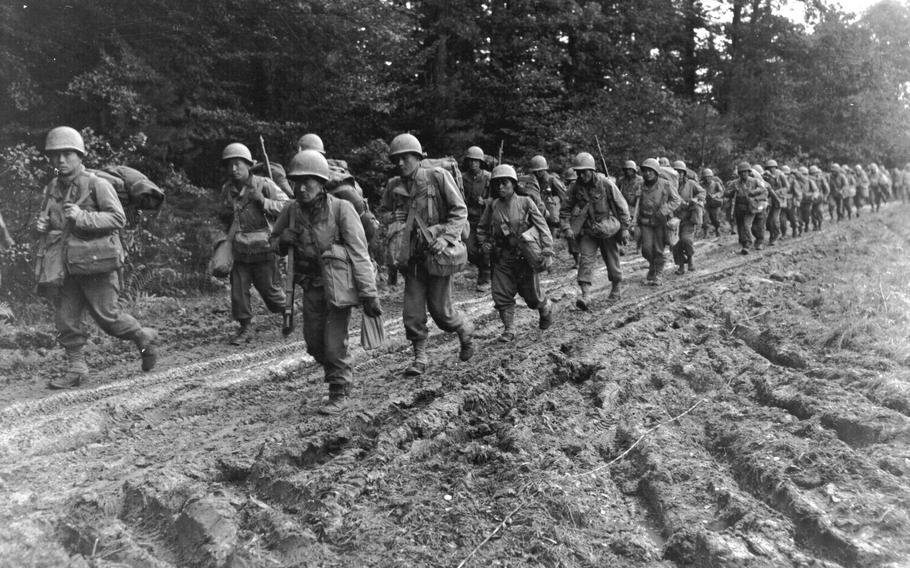 Japanese-American infantrymen of the 442nd Regimental Combat Team hike up a muddy French road in the Chambois Sector, France, in late 1944. (U.S. Army)

(Tribune News Service) — The cab driver couldn't figure it out.

Looking at the two Japanese American soldiers clad in U.S. Army uniforms sitting in the back seat of his taxi, he could not fathom why they had directed him to drive them to the Japanese internment camp in Santa Fe.

After all, the U.S. was still locked in fierce combat with Japan, as well as Germany and Italy, during the height of World War II.

The cabbie needed to understand.

"How come you have somebody in here when you're in that uniform?" the driver asked the two men as he drove them up to the gates of the camp, where thousands of Japanese Americans, then considered a threat to the country they lived in, were imprisoned.

How could they answer that one, wondered historian and author Gail Okawa — whose grandfather was one of the many men incarcerated in the Santa Fe camp.

It was one of the many ironies of a scenario few could understand at the time, she said: Parents locked up behind barbed wire fences while their sons, wearing the uniform of the U.S. military, risked their lives for the country that had imprisoned their loved ones.

Calling it a tragic chapter in American history, Okawa said the reasons those young men served, despite the injustice done to their elders, varied.

The complexity of the situation deepens when one considers the feelings of the incarcerated parents and siblings, she added. Many Japanese American parents encouraged their sons to fight for the U.S., which spoke to a tradition of respect for family and "a Japanese value that had to do with country, essentially, and they saw their sons as Americans."

They were Americans who, in most cases, were not fighting directly against soldiers from their families' native land but who, time and again, proved themselves in battle to such a degree their combined military combat team — the 100th/442nd Regimental Combat Team — is considered the most decorated unit for its size and length of service in the war.

Aside from struggling with anti-Japanese sentiment in America, those who went to fight also had to contend with a fierce internal conflict within the camps: a sharp division between those who saw military service as the answer to overcoming suspicion and hatred and those who refused to risk their lives in combat for a country that would round up American citizens based on race and imprison them.

Tensions ran high between the two factions, and the animosity would carry on for decades after the war.

Similar to a civil war, rifts could form within families, turning brothers against brothers, said Nikki Nojima Louis, 84, a playwright and scholar who spent three years in the camps as a young girl and whose uncle served in the 442nd.

"They were not a monolithic group," Louis said. "You might have a son who was patriotic and volunteered in the 442nd. You might have another son or a nephew or a brother-in-law who was a protester."

Louis said as a playwright, she is interested in exploring this friction within the camps — especially among family members — partly to dispel the notion all Japanese Americans accepted living behind barbed wire and complied with everything the U.S. government demanded.

Those who resisted military service were labeled "no-no's," she said. They said "no" to the two questions asked every incoming male prisoner — would they give up any allegiance to Japan's Emperor Hirohito and, if called, would they enlist in the American military?

She said through her plays she has sought to present a more complete story of the men who served in the 442nd and how it was intertwined with the incarceration.

"We are the last generation alive to remember the camps," Louis said.

Proving their loyalty in battle

The 442nd's motto, in combat, was "Go For Broke!" indicating the soldiers were risking everything, including their lives, not just for victory, but to prove their worth and loyalty to their country.

Modern-day estimates say about 800 of them died in combat, but many more were wounded.

Initially, white soldiers were skeptical of the 442nd, partly because many of the Japanese Americans were short in stature and didn't, in their view, appear to make up a formidable fighting team, said Mitchell Maki, president of the Los Angeles-based Go For Broke National Education Center, named after the unit's motto.

"They proved their mettle on the battlefield," Maki said.

One legendary mission was the "rescue of the lost battalion" in October 1944, he said.

About 270 members of a Texas National Guard unit were trapped in the northern mountains of France, surrounded by 6,000 German troops in a forest, Maki said. After several failed attempts to extract the soldiers, who were being bombed daily, the Army decided to send in the 442nd, even though the unit was tired after liberating two towns and was due for some rest.

The men knew it was a suicide mission and many wouldn't return, but they were undaunted, he said.

They rescued 211 of the Texas soldiers and suffered 300 casualties, Maki said.

Another memorable mission, which proved pivotal, was the unit's nighttime assault on a German stronghold within the Gothic Line, a fortified defensive line that stretched 200 miles across the mountains of northern Italy.

Allied Forces had been stalled for months at this last line of defense into Germany.

In April 1945, members of the 442nd scaled up a steep, rocky slope at the back of the fortification in the middle of the night, with the aim of a surprise assault in the morning.

The soldiers agreed if any of them fell, they would not cry out, Maki said.

At dawn, the unit attacked the bird's nest and prevailed, punching the first hole in the Gothic Line, he said. The gap helped Allied Forces break through the line and push Germany into surrendering in May.

The unit's bold actions were all the more extraordinary given how they and their families had been incarcerated in the states, Maki said.

"They had every reason not to serve," he said.

Fighting against more than the enemy

Despite their derring-do in battle, the Japanese Americans no doubt had to endure racism from some white officers and fellow soldiers who, at best, tolerated their presence and who, at worst, saw them as potential enemies.

As dangerous an enemy as Germany seemed, having torn through and eaten up much of Europe, many Americans viewed Japan as the deadlier and more hated foe. After all, it was the Japanese attack on Pearl Harbor on Dec. 7, 1941, that drew the U.S. into World War II.

That very day, U.S. military and law enforcement authorities began arresting Japanese American citizens, first in Hawaii, and then nationwide. Many of them were law-abiding thinkers, scholars, teachers, and community and religious leaders who called the U.S. home.

The U.S. quickly built or revamped existing structures to create the camps for Japanese Americans — who the government feared might stir up unrest and sabotage.

Some 120,000 Japanese Americans were interned. Early in 1942, the U.S. Justice Department expanded a Civilian Conservation Corps camp in Santa Fe into one such holding center. The camp's population went up and down during the war, hitting a high of about 4,500 people early on.

It was soldier Tadami Izutsu, who served in the 442nd, who later told the story of the Santa Fe cab driver perplexed by the seeming contradiction of his wearing a U.S. Army uniform and visiting the camp on Alameda Street. Izutsu, however, was not the only military member to pay visits to family behind locked gates. Existing photos often show uniformed sons and nephews posing alongside their interned relatives, including in the Santa Fe camp.

Izutsu, in his memoir, recalled his first meeting with his father in that camp. “Something stirred deep within me when I saw my beloved father helplessly imprisoned but never complaining about the injustices of the war,” he wrote. (Okawa covers this story in her book “Remembering Our Grandfathers’ Exile: US Imprisonment of Hawaii’s Japanese in World War II.”)

Following his second visit to see his father, he wrote a letter to George C. Marshall, then serving as chief of staff for the U.S. Army, asking him to "consider releasing my father … for I was now actively serving the United States of America, proof of my devotion and willingness to die for my country."

Izutsu later assumed the letter was intercepted and probably never reached Marshall; at that time, all missives and parcels were subject to censorship and investigation. He wrote, perhaps with a touch of sadness, there was "some consolation that I had done everything possible to help my father."

Louis, the playwright, recalled how she and her mother boarded a train with covered windows in fall 1942 that took them from Washington state to the Minidoka internment camp in Idaho. Her father went to camps in New Mexico, including the one in Santa Fe.

It was common to separate the men from their families, she said.

After the war ended and they were reunited, they moved to Chicago, she said. In her senior year of high school, she went to live with an uncle in Seattle who had served in the 442nd.

Her uncle, who had the stoicism of the older Japanese generation, didn't talk about his war experiences, she said. But being a teenager who had no interest in such things, she also never asked him about his service — something she came to regret, she said.

"Now all these people are gone, and I'm hungry for their stories," Louis said.

About 14 years ago, when she was studying at the Santa Fe Art Institute, a local radio host took her to the monument marking the area of the internment camp that held her father.

It made her want to learn more about the camps, she said.

Louis said her Japanese heritage has deeply ingrained in her the ethos of not speaking out against one's family or community. Although she was an activist in the 1960s, she couldn't imagine having to choose sides in a camp, as many young men did, she said.

As a playwright, she can be neutral and create characters who can express conflicting points of view about fighting for a country that is imprisoning them and treating them like second-class citizens, she said. That spares her from having to express opinions on the subject, she said, adding she is sympathetic to all sides.

"This part of the human dilemma and history," Louis said. "This is not just a Japanese story. It's an American story."