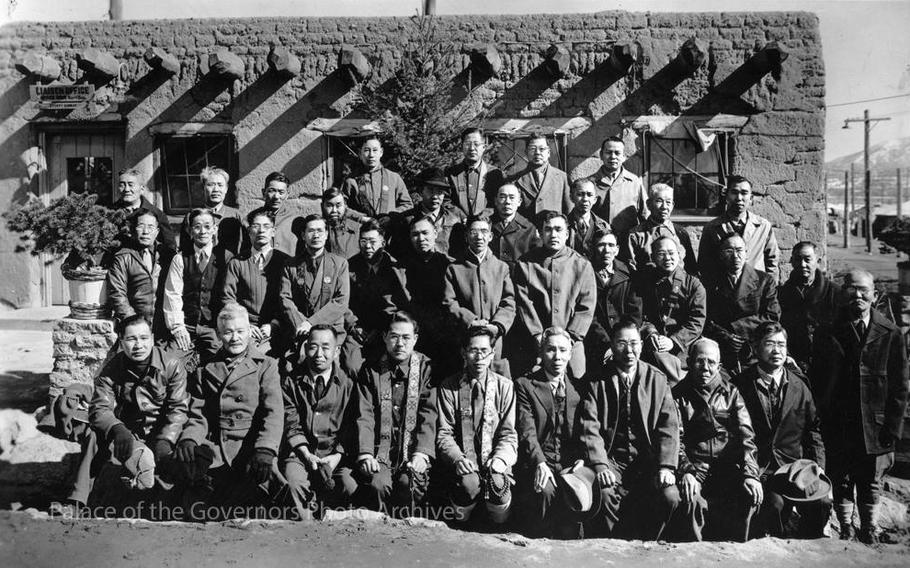 The men U.S. government officials and the military arrested were different in so many ways — some were intellectuals, some businessmen. Others were artists or farmers or educators. Many were husbands and fathers.

But they had at least two things in common: they were Japanese American, and they were now considered enemies more likely to aid the Japanese than the country they had adopted as their new homeland.

So they were locked up, many at an internment camp in Santa Fe.

And for a long time, nobody really knew about it or talked about it. It was like a dirty part of Santa Fe's history, an episode to be disassembled and covered up, much as the camp itself was following the end of the war.

About 80 years after the camp was created and 20 years since the city of Santa Fe created a stone monument to commemorate the history and site in what is now Frank S. Ortiz Dog Park in the Casa Solana neighborhood, the New Mexico History Museum and the New Mexico Japanese American Citizens League came together to ensure people do not forget.

"A community is only as strong as its willingness to look at itself ... and its past," Mayor Alan Webber said in brief opening remarks to a one-day seminar about the camp held at the history museum.

Gail Y. Okawa, whose grandfather was held in Santa Fe starting in 1943, said for years there was little or no information about the camp, which opened in March 1942 and closed in April 1946 — several months after the war with Japan came to an end.

Her grandfather, the Rev. Tamasaku Watanabe, was serving as a Christian minister in Hawaii when he was arrested the day World War II began for the U.S. He was held in a number of other camps before ending up in the Santa Fe facility in June 1943.

Okawa, who gave a presentation on the camp and painted a human portrait of the men stuck behind its barbed wire fences, told the assembly: "Today, we can and must remember them and the injustice they suffered. Their legacy is in us and for us to maintain and act on."

After war began, patriotism, suspicion, racism and a desire to even the score all mixed together as the U.S. quickly built or adopted existing structures to create the camps for Japanese Americans — who, the government feared, might foment unrest and sabotage in the wake of the Pearl Harbor attack.

Some 120,000 Japanese Americans were interned. Early in 1942, the U.S. Department of Justice expanded a Civilian Conservation Corps camp in Santa Fe into one such holding center.

The camp's population went up and down during the war, hitting a high of about 4,500 people early on.

For the most part, the men were middle-aged and considered leaders in their home communities. In an ironic and sad twist, many of them had sons who were fighting in the armed forces for America. Some of the internees had served with the U.S. military during World War I.

While abuse and mistreatment at the hands of the guards was common at many of these camps, most reports indicate the Santa Fe camp denizens were treated with respect by Department of Justice guards who discovered the men were not real threats.

But, as Saturday's event demonstrated, the men — who were not allowed to become citizens of the United States but who had already built businesses, communities and relationships in America — were disheartened, confused and suffering from what one Japanese prisoner termed "barbed wire disease."

"Some were very disillusioned about what America was and meant to them," Okawa said.

When the war with Japan ended in September 1945, government officials began shutting down the camps and releasing the internees. It's not clear why the Santa Fe camp remained open until April 1946.

Santa Fean Jerry West, whose father worked as a guard at the camp, said many locals were aware of the camp during the war years. He recalls some youth passing by the facility and throwing rocks or shooting BB gun pellets into the air over it.

Much of the reason for local rancor had to do with another historic incident tied to New Mexico and World War II: the battle for the Philippines in the months after the war's beginning and the ensuing Bataan Death March, in which many New Mexicans died or were imprisoned by the Japanese.

Those anti-Japanese sentiments remained decades later when officials from the New Mexico History Museum, the city and other entities came together to approve and set up the commemorative marker above the camp.

Some of those involved in that effort, including former New Mexico History Museum director Tom Chavez and former City Councilor Frank Montaño, took part in an afternoon panel discussion about the challenges they faced due to strong opposition.

Chavez said supporters of the monument knew they would have a "hard nut to sell" because of "the state's connection to Bataan."

In the autumn of 1999, the City Council voted 4-4 on approving the monument. Then-Mayor Larry Delgado broke the tie with his vote in favor of the project.

"The whole project was about sharing history, and history won out," Chavez said.

Montaño, who voted in favor of the monument, said it was one of the most controversial issues he recalled in the 12 years he served on the council.

"We had to put the marker up there so we remember, so we don't forget what happened there," he said.

About 100 people attended Saturday's event, and many were planning to take part in a pilgrimage to the marker in the early evening.

Okawa, who wrote the book Remembering Our Grandfathers' Exile: US Imprisonment of Hawaii's Japanese in World War II, said she thinks history could repeat itself when it comes to holding citizens of another culture, ethnicity or nation under similar circumstances.

"But it depends on how well we can keep our values in our heart and how well we keep focused on what democracy means," she said.