Abortion in the Founders’ era: Violent, chaotic and unregulated 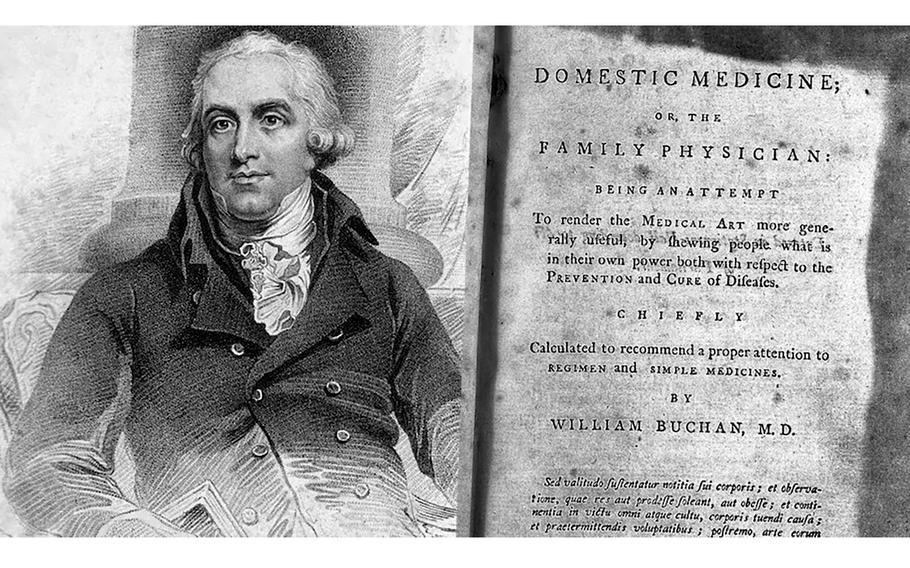 In the late-18th century and early-19th century, many American homes would have had a copy of "Domestic Medicine" by William Buchan, pictured here. The book included instructions to eliminate "obstructed menses" — a euphemism for early pregnancy. (National Institutes of Health)

Justice Samuel Alito Jr. calls himself an originalist, someone who thinks the Constitution should be interpreted only by how it would have been understood by the Founders when they wrote it. So it’s no surprise that his draft opinion overturning Roe v. Wade is full of history.

At least seven times, Alito cited Sir Matthew Hale, a 17th-century jurist who didn’t think marital rape was possible because wives were the property of their husbands, and who sentenced at least two women to die for witchcraft. Alito also cited a legal text from 1250 by Henry de Bracton that, in another section, says women are inferior to men, and that they sometimes give birth to literal monsters.

Alito confined his exploration of the past to legal history and English common law. But to assess how the Founders would view abortion rights, it’s necessary to paint a fuller picture of what abortion was actually like in the time of the Founders.

And it was very different from how it might look in a post-Roe America.

In the 18th-century United States and England, abortion was common enough that there were slang terms for it, like “taking the cold,” “taking the trade” and “bringing down the flowers.” It was less-effective and more dangerous than it is now; women seeking abortions often died from infected wounds or poisons. And it was generally unregulated, except for a few instances in England and one in colonial Maryland mentioned by Alito in the draft opinion.

In the late-18th and early-19th centuries, no states had laws against any form of abortion, though Alito averred that “manuals for justices of the peace printed in the colonies in the 18th century” sometimes “repeated Hale’s and [William] Blackstone’s statements that anyone who prescribed medication ‘unlawfully to destroy the child’ would be guilty of murder if the woman died.”

In the Revolutionary War era and the decades after, most homes would have had a medical manual such as William Buchan’s “Domestic Medicine” or Samuel K. Jennings’s “The Married Woman’s Best Friend,” according to James C. Mohr in “Abortion in America: The Origins and Evolution of National Policy.”

These books included recipes for concoctions that could induce menses that had been “blocked” or “suppressed” — a common way to refer to early pregnancy. One gave advice specifically for young women who had “what you call a common cold” (emphasis in original), before listing plant extracts believed to induce abortion. Another advised that if the concoctions didn’t work, one could try “violent exercise ... jumping or stepping from an eminence, strokes on the belly, [and] falls.”

One of these plant extracts, savin, which comes from juniper bushes, was particularly effective and also plentiful in the United States. But it came with high risk; too much could be lethal to the woman. Plus, there was the issue of murder: For some men acquiring savin for a woman they had impregnated, the “problem” was still solved if the woman died. (Murder, often at the hands of a romantic partner, is still the No. 1 cause of death for pregnant people.)

Beyond the ruling classes in England and America, there is also evidence of abortion among Indigenous American peoples and the enslaved, according to John Riddle in “Eve’s Herbs: A History of Contraception and Abortion in the West.” Enslaved Black people likely brought this knowledge with them from Africa. A drink made of a certain type of cotton root native to Africa was used to induce abortion throughout the South.

Unlike many antiabortion activists today, most religious and legal scholars at the time did not think “ensoulment” began at the moment of conception but at the time of “quickening” — when a pregnant person can feel fetal movement, generally between 16 and 22 weeks. The vast majority of Alito’s historical references concern cases of abortion after the fetus was “quick.” He took pains to point out the few times his sources don’t mention it, but this isn’t necessarily evidence the people involved thought abortion before quickening was also wrong or a crime. Back then, a woman was simply not considered to be “carrying [a] child” before quickening, according to British historian Kate Lister.

In one of these instances, Alito introduced the English case of Eleanor Beare, writing, “In 1732, for example, Eleanor Beare was convicted of ‘destroying the Foetus in the Womb, and there-by causing her to miscarry.’ “ In the next paragraph, he wrote that “the judge said of the charge of abortion (with no mention of quickening) that he had ‘never met with a case so barbarous and unnatural.’ “

But a read of Alito’s source for this quote, a contemporaneous trial summary in Gentleman’s Magazine, reveals that the judge was talking about more than just abortion. Beare was tried on three charges and convicted of two: giving a man poison for the express purpose of killing his wife, and ending the pregnancy of a servant who was raped in her home by inserting an iron skewer into the woman’s uterus.

The exact timeline is unclear, but the servant implied in her testimony the abortion may have taken place at least 14 weeks after the rape (by current measures, this would have made her at least 16 weeks pregnant), so it is clearly possible the abortion happened after quickening. She also implied that the last time she saw Beare, an associate of Beare’s may have tried to poison her.

The mayor of Beare’s town then testified he had received many complaints about Beare keeping a disorderly house, as if that were evidence of guilt, at which point the judge said the prosecution had proven its case so thoroughly there was no point in presenting evidence on the third charge. “His Lordship summed up the Evidence in a very moving Speech to the Jury, wherein he said, he never met with a Case so barbarous and unnatural,” the magazine reported. A judge today would not be allowed to say any of these things to a jury.

Beare was sentenced to three years in prison and two days on the pillory — an instrument locking the head in place in a public square — where she was assaulted so badly by passersby that she nearly died.

England passed its first law officially banning post-quickening abortion in 1800. The United States didn’t follow until 1821, when the Connecticut legislature banned giving a noxious substance to a woman “quick with child.” This was in the wake of a sex scandal involving a controversial preacher and a young woman he allegedly impregnated. The pastor gave her “poison” and, when that didn’t work, inserted “a tool” inside of her. She later delivered a stillborn child.

Authorities wanted to jail the preacher but couldn’t find any laws on the books he had broken. In this context, said Mohr, the “Abortion in America” author, the country’s first antiabortion law should be viewed as more of a “poison-control measure.”

Lolita Buckner Inniss, dean of the University of Colorado’s law school, who has studied the case in depth, had a different take when she spoke about it with The Washington Post in 2019. She pointed out that this first law banned only medicinal abortions, not mechanical ones. Medicinal abortions were more often administered by women — “grannies and midwives, many of them immigrants and formerly enslaved women” — while the mechanical abortions, the Beare case notwithstanding, were more often the purview of men in the burgeoning medical field.

There’s another aspect of pregnancy and childbirth during the Founders’ time not mentioned in Alito’s draft opinion: the prevalence of infanticide. Desperate women would sometimes dump a newborn in an outhouse or otherwise secretly kill the child and destroy the body.

It is impossible to know how many women got away with this undetected, but Lister pointed out that it too was common enough to have a grotesque slang term that made it into a 1785 lexicon book. She has found numerous British trial records for women accused of killing their newborns; between 1700 and 1800, there were 134 of these cases in a single London court.

“We must remember that this is only one court, in one area and these trials are the ones that were caught,” she wrote. “The actual figures of illegitimate infanticide will never be known.”

This was the case even with the presence of foundling hospitals, where women could safely abandon babies. These homes were perpetually over capacity, to the point where mothers had to enter a lottery to win a spot at one of them. Mothers were often required to leave a token with their babies, like a colored ribbon or unique button, in case they wanted to return for them. Of more than 16,000 babies brought to one hospital between 1741 and 1760, only 152 were reclaimed.

None of this resembles abortion today, whether or not it remains legal nationally. Abortion pills are regulated and safe to use. Surgical abortions have also become safe, and the “quickening” standard has shifted to a “viability” argument. We know more than ever about fetal development, and some states have permitted later abortions for medical reasons. Child-bearing without marriage, though still stigmatized, has become less so.

This is one reason critics of originalism say the historical understanding doesn’t, or at least shouldn’t, matter. The legal scholars Alito quoted lived in a world where women were property, babies could be “monsters” and abortion was dangerous.