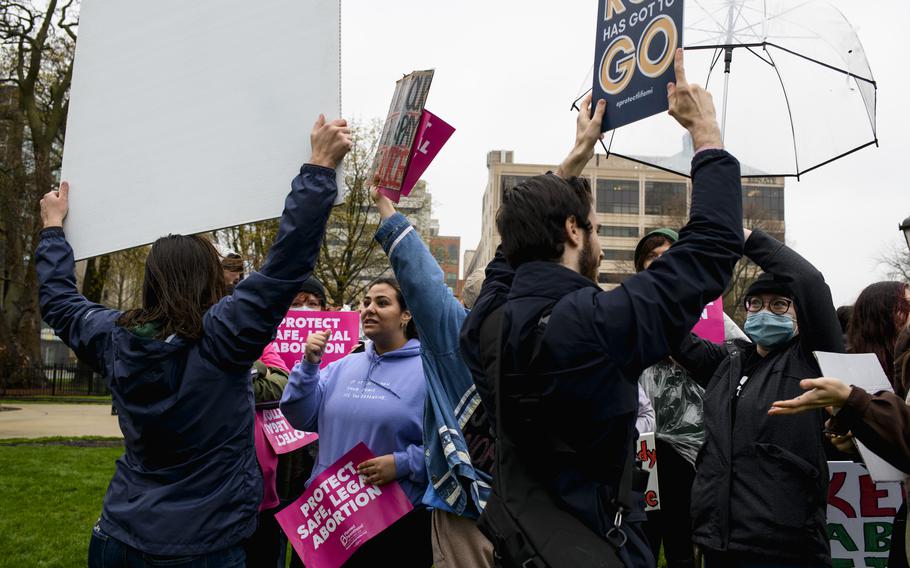 Demonstrators rallying in favor of and against abortion rights argue with one another outside of the Michigan Capitol in Lansing on Tuesday after news broke that Roe v. Wade may be struck down by the Supreme Court. (Brittany Greeson/The Washington Post)

Abortion clinics in Republican-led states scrambled Tuesday to prepare for an imminent future in which abortion would become illegal. Providers in Democratic-led states mapped out plans for a parallel future — in which they would expand their operations to welcome patients seeking refuge from red America. And state lawmakers vowed to pass, or combat, legislation befitting a new phase in the battle over reproductive rights.

While both sides of the decades-long abortion battle have known for months that the Supreme Court was poised to weaken the landmark Roe v. Wade ruling, the startling leak of an unequivocal draft opinion proposing to strike it down has crystallized the red-blue abortion divide that would define life in a post-Roe world.

It immediately transformed a largely abstract conversation into a visceral realization: If the court’s conservative majority holds, abortion could be illegal in many states in a matter of weeks.

“We don’t have a plan,” said Leilah Zahedi, a high-risk obstetrician who provides abortions in Tennessee, a state with a “trigger ban,” a law designed to block abortion as soon as Roe is overturned. “But now I’m in fix-it mode, like: What do we need to do to make sure I can provide as many abortions as I can?”

Chief Justice John Roberts said Tuesday the draft opinion was not final, but the words written by Justice Samuel Alito offered a legal road map to a bifurcated system of abortion access.

Trigger bans are already on the books in 13 states, while more than a dozen more GOP-led states are poised to severely restrict the procedure.

Antiabortion leaders — in Republican states and in Washington — have been mobilizing to ensure that the strictest possible abortion limits can take effect immediately if the Supreme Court overturns Roe.

In recent months, Marjorie Dannenfelser, president of the antiabortion Susan B. Anthony List, said she has spoken privately with at least 20 governors and more state legislators to discuss the laws they have on the books, and how to activate those laws as quickly as possible. Each of the trigger bans, for example, work a little differently, she said.

“Each state has their own tricky story,” Dannenfelser said.

Arkansas state Sen. Jason Rapert, R, who introduced his state’s trigger law, said he plans to write to the Arkansas attorney general and solicitor general, advising them that they’ll need to formally certify the Supreme Court decision in order for the trigger law to take effect.

This should happen within minutes of the decision coming down, Rapert said.

“They just need to acknowledge, ‘Yes, this has occurred,’” Rapert said.

The Arkansas trigger ban will make performing an abortion a felony punishable with up to a $100,000 fine and 10 years in prison.

“I’ll be happy to see the butcher mill in Little Rock, Arkansas, shut down for good,” Rapert added.

In Alabama, which has several abortion bans on the books that would probably take effect if Roe is overturned, abortion providers said they were somewhat relieved to have some warning before a decision becomes official.

Doctors and staff at the West Alabama Women’s Center in Tuscaloosa are considering adding an extra day a week to their schedules and extending their hours until the decision comes down so they can see as many patients as possible, said Robin Marty, the clinic’s director of operations.

“Now at least if nothing else, we have a timeline,” Marty said. “We know what the decision is going to be, and we can start putting plans in action.”

They have also been troubleshooting particular questions that could arise if the trigger law activates. For example, Marty said, she’s not sure what would happen to patients who have taken the first but not the second pill required for a medication abortion when abortion suddenly becomes illegal. Marty is also concerned about the law activating after a surgical procedure has begun.

Ultimately, large swaths of the South and Midwest would probably become abortion deserts.

A number of Democrat-led states have been building infrastructure for exactly this moment, with abortion providers constructing clinics and call centers near red-state borders, and Democratic lawmakers unveiling strategies to fight restrictive laws.

The closest alternative for many in the South would be Illinois, a Democratic-led state with some of the least restrictive abortion laws in the country.

Approximately 14,000 patients are expected to flood into southern Illinois if Roe is overturned, according to Planned Parenthood.

Two clinics on the southern border of Illinois have been laying the groundwork for this moment for years, said Colleen McNicholas, chief medical officer of Planned Parenthood of the St. Louis Region and Southwest Missouri, who provides abortion in Illinois as well as Republican-led Missouri.

McNicholas helped to create a first-of-its-kind call center at the Planned Parenthood on the Missouri-Illinois border, designed to help patients travel to the region in a post-Roe world, helping to cover much of the associated costs.

On Tuesday, McNicholas said, patients were already calling to ask if abortion was still legal. Even in Democratic-led Illinois, she added, patients who had heard the news weren’t sure whether they would be able to come in for their appointments.

Illinois Gov. J.B. Pritzker, D, predicted that his state will play a unique role in providing abortions if Roe falls. The state has some of the country’s most robust protections for abortion access.

“We recognize that because we protected women’s reproductive rights here, people will be refugees from anti-choice states,” Pritzker said.

Other Democratic-led states have been moving in the same direction, anticipating an unfavorable Supreme Court decision.

In Connecticut, the state Senate gave final approval last week for the state to be a place of refuge for patients who live in conservative states limiting the procedure, and a spokesman for Gov. Ned Lamont, D, confirmed he plans to sign the legislation.

“This law makes Connecticut a safe harbor for law-abiding abortion providers and people who are coming here to seek care,” said state Rep. Matt Blumenthal, D, one of the sponsors of the bill. One of the main ideas is to counteract potential laws that could be used to sue providers who help an out-of-state patient access an abortion in Connecticut.

The Connecticut law specifically addresses what legal experts have called the next frontier for lawmakers in antiabortion states: restricting abortions across state lines.

A Republican lawmaker in Missouri proposed legislation this year that would allow private citizens to sue anyone who helps a Missouri resident access abortion outside of the state, using the novel legal strategy behind the Texas law that banned most abortions there in September.

Connecticut lawmakers have had initial conversations about the legislation with policymakers in California and Massachusetts, as well as advocates and experts across the country, according to Blumenthal.

“It remains to be seen what exactly these other states are going to do, but we do anticipate — and other legal experts anticipate — that these states and others will model their laws after ours or seek to, at least,” he said.

While trigger ban states would activate the first wave of total abortion bans, other Republican-led states are likely to follow their lead.

Florida Gov. Ron DeSantis, R, a possible 2024 GOP presidential candidate, last month signed into law a bill that would ban abortions in the state after 15 weeks of pregnancy - modeled after the Mississippi law at the heart of the case pending before the Supreme Court.

Florida Republicans had shrugged off passing a more stringent prohibition, describing the 15-week timetable as “very reasonable” and “generous.”

But a 15-week ban would prevent only a sliver of the tens of thousands of abortions performed in Florida — a state that currently has one of the more lenient laws in the Southeast, allowing abortions up to 24 weeks of pregnancy.

If Roe is overturned, state lawmakers would probably seek to bar the procedure after fetal cardiac activity is detected, roughly around six weeks, said John Stemberger, president of the Florida Family Policy Council, an antiabortion lobbying group that is in communication with the Republican leadership and the governor’s office on abortion issues. He anticipates such a bill would gain traction during next year’s legislative session and doesn’t expect it to include Texas’s novel enforcement mechanism deputizing private citizens to file lawsuits.

“I think if Roe v. Wade is overturned, and Justice Alito’s decision is what we think it is, then I think that’s likely to be a next step that you’ll see in Florida,” he said.