Russians could face a war crimes tribunal; the first one, in 1474, ended in a beheading 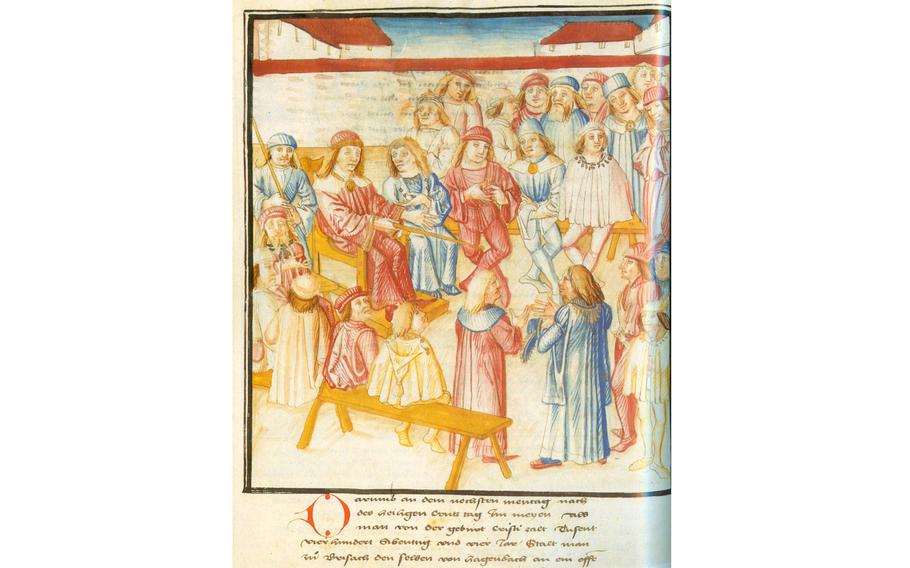 Earlier this month, the International Criminal Court announced it was investigating possible war crimes in Russia’s invasion of Ukraine, including the alleged use of cluster munitions and vacuum bombs, targeting of civilians and an attack on a nuclear facility.

Neither Russia nor the United States is a member of the International Criminal Court. Ukraine isn’t either, although it has previously accepted the court’s jurisdiction within its borders.

The current ICC at The Hague sprang from the Nuremberg trials of high-level Nazis after World War II. But the concept of an international war crimes tribunal goes back more than 500 years, to an empire that no longer exists and a case that ended in a beheading.

In the late 15th century, the Holy Roman Empire stretched across much of Central Europe, comprising dozens of independent and mostly German-speaking city-states, although its power was waning. To the west, the kingdom of France was taking shape. And sandwiched between the two was the Duke of Burgundy, Charles “the Bold” (or “the Terrible,” depending on whose history you’re reading), who was constantly trying to expand his control in both directions.

In 1469, the duke acquired a number of territories in the Alsace and Upper Rhine regions in a complex deal with the Holy Roman Empire. No one bothered to ask the people living in these regions what they thought of the deal, so when Peter von Hagenbach, one of the duke’s knights, assembled an army and showed up to govern the place, the people were somewhat hostile. It didn’t help that Hagenbach spoke French and these people spoke German.

Had the duke sent someone with a light touch, who could have won over the hearts and minds of the people, the acquisition of the region could have been hugely helpful to the duke, who had visions of becoming the Holy Roman emperor, according to Gregory S. Gordon, a law professor and international tribunal expert who has written about the case.

But “light touch” was not Hagenbach’s vibe. He soon levied taxes, probably in violation of the arrangement with the Holy Roman Empire, and, according to an account by the French historian Prosper de Barante that Gordon quoted, when representatives of the town of Thann complained to Hagenbach that the taxes were too high, he had them executed “without any sort of trial.”

He made farmers abandon their fields and work for him; his soldiers mistreated people in whose homes they were quartered; and Swiss merchants passing through the area, who were not subject to his authority, were imprisoned and abused.

But his “chief atrocity,” according to Gordon, appears to have been mass rape. Hagenbach’s soldiers terrorized the women of the region, and Hagenbach was said to have personally raped a young nun. In another sadistic episode recounted by Barante, Hagenbach invited all the married couples in a town to a party. Once they arrived, the women were made to strip naked and put a cloth over their heads while the men were confined to another room. Each man was then forced to guess which nude woman was his wife; guessing correctly meant the husband was allowed to die by alcohol poisoning rather than being thrown down the stairs.

Recent historians have questioned the veracity of these more outlandish stories about Hagenbach, which come from the writings of enemies, who may have been angrier about Hagenbach’s anti-corruption reforms. But even these “revisionist” historians, as Gordon referred to them, acknowledged that he was strict, gruff and increasingly cruel to the people he governed, and that his harshness may have included sexual violence.

In any case, by 1474, an alliance of Swiss and Austrian soldiers, with France’s encouragement, united against Burgundy, and Hagenbach holed up in the walled city of Breisach, where he planned to exterminate the residents. In the end, his own soldiers mutinied and offered him up to enemies.

Hagenbach was repeatedly tortured and allegedly confessed to his crimes. But rather than having him summarily executed or given over to a lynch mob, the archduke of Austria convened a jury of 26 representatives of the sovereign regions that had allied against Burgundy to decide his fate.

The trial began at 8 a.m. on May 9, 1474, in an open-air court packed with people hoping to witness an execution. The prosecutor said Hagenbach had “trampled under foot the laws of God and man” by committing murder, conspiracy to commit murder, perjury and rape. The defense claimed the ad hoc court had no authority, that Hagenbach’s sexual encounters had been consensual, and that his other acts were on the direct order of Charles the Bold.

The defense counsel implored: “Sir Peter von Hagenbach does not recognize any other judge and master but the Duke of Burgundy from whom he had received his commission and his orders. He had no right to question the orders which he was charged to carry out, and it was his duty to obey. Is it not known that soldiers owe absolute obedience to their superiors?”

He asked that the court adjourn so interrogators could ask the duke himself whether Hagenbach’s claims were true, but the court ruled that it didn’t matter, as such a defense would be “contrary to the law of God.”

By 4 p.m. on the same day, the jury found Hagenbach guilty and sentenced him to death. Representatives of seven towns vied for the chance to be the executioner. Hagenbach asked for forgiveness for his crimes and “for other things even worse than that.” Then he was beheaded.

(Hagenbach’s mummified head is on display at a museum in France, and The Washington Post recommends that you not Google this, because it is gruesome.)

For centuries, the tale of Hagenbach’s life and death was largely buried in history books. But the English scholar Georg Schwarzenberger unearthed it in 1946 as the international community was preparing for what would become the Nuremberg trials. Schwarzenberger was born a German Jew and had emigrated to Britain in 1934; most of his family died in the Holocaust.

Here, in the Hagenbach trial, was precedent, Schwarzenberger wrote in op-eds and books, for the jurisdiction of an international tribunal, the concept of war crimes and crimes against humanity, and the rejection of the “superior orders” argument.

Apparently, the Nuremberg prosecutors and judges noticed, because they cited the Hagenbach case, which had taken place “only a few hundred kilometers from Nuremberg,” several times over the next few years. And at Nuremberg, the “superior orders” argument, now often called the “Nuremberg defense,” also largely failed. What a judge in 1474 called “contrary to the law of God” essentially became Nuremberg Principle IV: “The fact that a person acted pursuant to order of his Government or of a superior does not relieve him from responsibility under international law, provided a moral choice was in fact possible to him.”