He grew up with a dog named Dixie; now, he’s renaming Army bases that honor Confederates 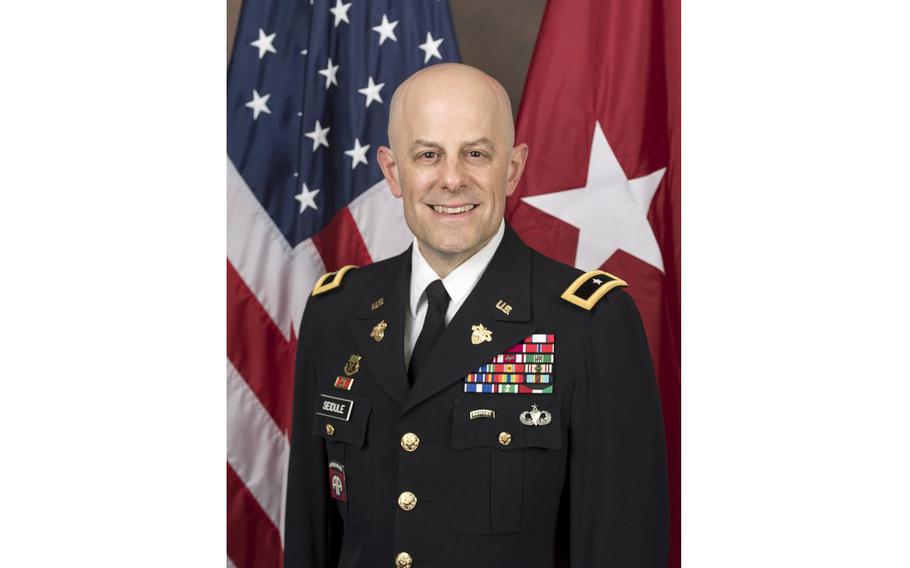 (Tribune News Service) — On Jan. 6, 2021, an insurrectionist with a huge Confederate flag walked past a portrait of Charles Sumner in halls of the U.S. Capitol building. A journalist captured the moment in a photo that made the rounds on the news.

The irony of that instance was not lost on retired brigadier general and West Point history professor Ty Seidule, who now lives in Clinton and is a visiting professor at Hamilton College.

Sumner was an abolitionist senator for Massachusetts who was beaten over the head with a cane by a pro-slavery congressman from South Carolina, for giving a speech criticizing slaveholders. Sumner dealt with recurring pain from that incident for the rest of his life.

He also engineered the institution of the military induction oath in 1862, which was first a sort of safeguard against Confederates. It was the same oath that Seidule would take over a century late in front of a huge, deified statue of General Robert E. Lee on the campus of Washington and Lee University.

Seidule’s whole life is like that — a series of historical fishermen’s knots that connect his early life as a Lee devotee to his career now as an outspoken reformist and member of the Congress-appointed Naming Commission to strike Confederate titles from Department of Defense-owned property.

Seidule grew up in Virginia and Georgia with a dog named Dixie and a drawing of Confederate battle flags over the mantle of his childhood home. His first chapter book was “Meet Robert E. Lee.” He wanted to be a Southern gentlemen.

He went to Washington and Lee University and joined R.O.T.C. to pay for college. Then he shipped off to Kosovo, Saudi Arabia, Iraq and elsewhere and picked up a brigadier generalship. He started teaching history at West Point 20 years ago.

That’s where he really started to pick apart his understanding of the Confederacy.

Now he has a book, “Robert E. Lee and Me: A Southerner’s Reckoning with the Myth of the Lost Cause,” and is on the Naming Commission formed by Congress to review and suggest new titles for Department of Defense property named after Confederates.

He stepped onstage at the Catherine Cummings Theatre in Cazenovia Friday to talk about Lee and the “Lost Cause,” an ideology that paints the Confederacy as a noble cause.

Nope, said Seidule. The Civil War was about three things: “racism, racism and racism.” As for Lee, he wasn’t only racist but a brutal slaveholder, said Seidule.

Lee was the only one out of eight U.S. Army Colonels for Virginia in 1861 who chose to fight for the Confederacy. Not only did he own enslaved Black people, but he handed out cruel punishments, like calling for salt water to be poured onto the wounds of the enslaved people after he had them whipped.

That’s not what Seidule knew when he was younger. His change of mind came sort of slowly and had a lot to do with books.

He stopped one day outside Lee Barracks at West Point and stared at the sign. He wanted to know why Lee’s name was all over the base. In Virginia? Sure. But on a U.S. Army base in New York?

He went into the West Point archives and found out that the first Confederate statues on base appeared in the 1930s when Benjamin O. Davis, Jr. joined up as the first Black cadet since Reconstruction. More Confederate symbols came in the early ‘50s, after the Army was instructed to integrate by President Harry Truman. Lee Barracks was named in the ‘70s as minority admissions increased the number of Black cadets on campus.

“It’s a reaction against integration. Against equal rights,” said Seidule. “And that just made me so angry.”

Seidule is a decorated former brigadier general, white, with a Southern lilt in his speech. He’s calls the Union Army “the U.S. Army,” Confederates “traitors” and plantations “slave labor farms.” He cuts an unconventional figure.

“I totally know that, and I use the heck out of it,” he said.

The first time might have been in 2015 when he narrated, in uniform, a short explainer video called “Was the Civil War About Slavery?” that racked up millions of views. (For that, the Army investigated him for political speech.) The second time was when he returned to Lee Chapel at his alma mater and gave a talk condemning the Confederate general.

Then in 2020 he retired so he could say what he liked. A year later he was appointed to the Naming Commission, which will submit a list of DOD property to Congress for renaming in October.

At the top of the list are the nine Army bases named after Confederates, all of which are in the South. But it will also include “names, symbols, displays, monuments and paraphernalia” like Lee Barracks at West Point.

“I’m a sucker for monuments,” said Seidule. He likes the Civil War memorial in Utica and the Walt Whitman quote on the gym at Hamilton College.

The Confederate flags he sees flying in upstate New York baffle him. “This is a place that provided so many sons that fought and died to save the United States and end slavery,” he said.

“The idea that we can show the Confederate flag — the flag of white supremacy, the flag of treason — it’s disheartening and it’s wrong.”

He didn’t comment on Syracuse’s controversial Columbus statue specifically but said that “each community has got to decide whether a commemoration reflects the values of the community. And it needs to be done with a diverse group of people.”

About 70 people showed up to Seidule’s talk in Cazenovia on Friday. The crowd was overwhelmingly white and over-50. They came with questions.

Seidule was asked about reparations (he’s in favor), police funding (not his expertise) and the theft of Indigenous land (Northerners have racist history too, said Seidule). And one Syracuse University professor pressed him on whether education was enough.

He talked about Germany, which has paved their streets with “stumble stones” to mark the places where Jewish citizens were abducted or killed, where monuments to those killed in the Holocaust are ubiquitous and where kids have to learn the history in school.

He drew a link between the empathy taught in those lessons to the Germans’ actions in 2016 in accepting a million Syrian refugees.

In the U.S., he said, there are still Confederate monuments outside courthouses.

In response to an audience member’s question about the potential to eradicate racism, he said that maybe he’s “aspirational,” but he’s still up there speaking.

“I love my country. I served this country for 36 years in war and peace,” said Seidule.

“People try and say ‘Oh, you’re not a patriot because you don’t love the Confederacy.’ No. I love the United States of America. And anybody that kills U.S. Army soldiers, that tries to destroy the country that I love — I can’t honor that.”