Mainers among them, ‘Ghost Army’ tricked Nazis to give Allies an edge 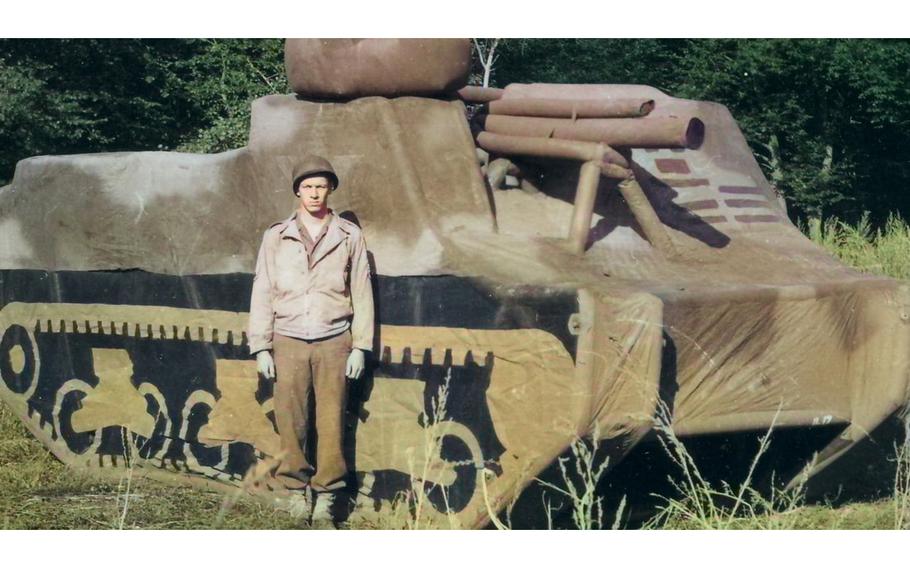 (Tribune News Service) — Andrew M. Mead often wondered about his father’s role in World War II, but it wasn’t until Mead was in his mid-20s that his father, Donald C. Mead, finally began sharing details of his secret mission.

Mead for many years believed his father served as a tank commander. But Donald Mead, who died in 1981 at the age of 58, actually served as a member of the Ghost Army, a group of soldiers assigned to a top secret Army unit that used deceptive warfare tactics to give American troops a battlefield advantage.

Soldiers in the Ghost Army were instructed to use their brains to mislead and deceive the German army, including by pretending to be a much larger and better-equipped fighting force. After the war ended, the unit’s soldiers were sworn to secrecy, records were classified, and their equipment was placed in storage.

Accounts of the Ghost Army’s undercover role started to circulate more openly in the 1970s and the United States officially declassified their mission in 1996, although it remained a little-known piece of World War II history.

Now, members of the Ghost Army are being honored with Congressional Gold Medals recognizing the risks they took and the lives they saved. Only a small number of the soldiers are still alive, but medals also will be given to the families of those who have since died, including Donald Mead.

Andrew Mead, who lives in Bangor and who serves as an associate justice of the Maine Supreme Judicial Court, provided the Press Herald with a copy of a letter written by his father and published by the Armed Forces Journal in 1981. The headline to his letter read, “The Sonic Deception Facet of Electronic Warfare.”

In the letter, Donald Mead describes his unit’s role in weakening Nazi defenses in northern Italy by persuading the German commander, through deceptive sounds, to move German troops away from the main thrust of the Allied forces’ attack. That allowed the Allies to break through German lines, cross the Po River, and successfully win the Italian campaign.

“Nowhere in any official history or archive has this contribution to Allied victory been recounted,” Donald Mead wrote. “Believing that this part of World War II history should not be forgotten, I would be glad to make available to any serious researcher any information I have.”

In a separate letter to the National Archives and Records Section, dated February 1976, Mead requested a copy of his unit’s combat journal. He describes in even greater detail his unit’s mission of sonic deception, which involved the use of high-powered amplifiers and loud speakers mounted on tank-destroyer vehicles. During the night, the sound devices broadcast recordings of armored vehicles moving, “to delude the enemy into believing” a large United States armored truck force attack was being mounted.

“When ... my father told us that his WWII service involved inflatable rubber tanks, I must admit that as a young man I was unimpressed and possibly amused,” Andrew Mead wrote in an email. “But many years later as I began to put the pieces together, I came to understand how extraordinary it truly was. But, by then he had passed away and it was too late to have the conversations I wish we had had earlier. The Ghost Army Gold Congressional Medal project has provided a welcome opportunity — albeit well after the fact — to pay tribute to him and the other courageous and creative men whose exploits might have otherwise disappeared into the void over the years.”

Ghost Army soldiers used air compressors to inflate rubberized tanks, and trucks equipped with ear-piercing sonic units designed to emulate troop movements to mislead the Nazis about the true size and location of American troops. They also dispatched false radio communications to befuddle German intelligence. The Army’s entire objective was to fool the Germans into thinking that American troop size was much larger than it actually was, a diversionary tactic that gave American troops the time they needed to maneuver their actual forces into position.

The National World War II museum in New Orleans may have described the Ghost Army best when it staged a special exhibit from March 2020 through January 2021 called: “ Ghost Army: The Combat Con Artists of World War II.”

There were two branches of the Ghost Army — the 23rd Headquarters Special Troops, which served primarily in France, Belgium, Luxembourg and Germany. It was the largest unit with 1,100 soldiers. Mead was a sergeant in the 3133rd Signal Corps Special Command, which served in Italy. More than 200 soldiers served in Mead’s unit.

A total of eight Ghost Army soldiers were born in Maine, according to the Ghost Army Legacy Project, a nonprofit organization based in Chicago that is dedicated to ensuring that the efforts of those soldiers receive recognition. None of the nine surviving members are in Maine.

Andrew Mead said he wanted to honor his father’s memory by making the Ghost Army’s efforts more public. He contacted Maine Sen. Susan Collins, whom Mead described as being “very supportive.” Collins agreed to co-sponsor legislation that will result in surviving members of the Ghost Army and their families receiving the Congressional Gold Medal — the nation’s highest civilian honor.

Sen. Edward Markey, D- Mass., and U.S. Rep. Annie Kuster, D- N.H., joined Collins to sponsor the bicameral legislation. President Biden signed the bill into law Feb. 1. The nine surviving Ghost Army members who live across the United States and the relatives of other members who have died will receive the Congressional Gold Medal.

“Our nation will always be grateful to the members of the Ghost Army, the top-secret Army units who served with distinction during World War II. I am pleased that our bipartisan legislation has been signed into law, which will recognize these soldiers by bestowing Congress’ highest civilian honor,” Collins said in a statement. “Their courage and resourcefulness were pivotal in the European theater and likely saved many American lives.”

Ghost Army units “were instrumental to Allied successes at the Battle of the Bulge and the final battles in Italy’s Po Valley,” the legislators pointed out. Collins’ own father, Don Collins, was a World War II veteran who was wounded twice in the Battle of the Bulge. He earned two Purple Hearts and a Bronze Star for his service. Collins, Markey and Kuster estimate that 15,000 to 30,000 American soldiers’ lives were saved as a result of the Ghost Army’s efforts.

Donald Mead grew up in Marblehead, Massachusetts. As a youth he operated a private radio station and was an accomplished telegrapher. He enrolled in 1941 at the University of Maine in Orono, where he studied electrical engineering.

Andrew Mead said his father’s military career began in 1943 during his sophomore year at the University of Maine. Donald Mead joined a “large group” of friends who traveled to Bangor to enlist in the United States Army.

Mead said his father received his basic training at Fort Dix in New Jersey before he was invited to an interview at a nondescript office building in New York City. He was dismissed after the interview and didn’t fully understand what the interviewer’s intentions were until he was ordered to report to a secret training facility at Pine Camp in upstate New York. Pine Camp was renamed Fort Drum in 1974. Mead said his father deployed to Italy in 1943 as a member of the 3133rd Signal Corps Special Command.

Beyer said the 3133rd’s assignment was to create sound deceptions created by installing sonic units on tanks, including speakers that could be heard miles away. A platoon of British engineers equipped with inflatable tanks was also attached to the unit, giving the 3133rd the means to carry out limited visual deception as well.

Beyer said the 3133rd was in action for 19 days. They carried out two successful missions in Italy. The soldiers of the 3133rd created their own unofficial uniform arm patch that showed the devil thumbing his nose.

Another unit of the Ghost Army, the 23rd Headquarters Special Troops, saw significantly more action in Europe. The 23rd used inflatable tanks, fake sound effects, radio trickery and illusions to fool the Germans into thinking they were facing much larger enemy units than they actually were in the field of combat. The 23rd operated in northern Europe, France, Luxembourg, Belgium, and Germany, and carried out 20 missions, according to Beyer.

Beyer said one Gold Medal will be produced by the U.S. Mint and presented to the Smithsonian Museum. It will contain 300 grams of gold, worth an estimated $20,000. It will take two years to create the design and mint the medal. Bronze duplicates will be presented to the surviving veterans and their families.

An official presentation ceremony will be hosted by members of Congress in two years. Beyer said the Congressional Gold Medal dates back to the American Revolution and is the highest distinction Congress can bestow.

The nine surviving Ghost Army soldiers are all in the late 90s, according to Beyer. They live in Ohio, Illinois, New Jersey, North Carolina, Florida and New York.

After the war ended, Donald Mead returned to the University of Maine, where he graduated with a degree in electrical engineering. After graduation he was hired by Western Electric, where he became involved in a number of Department of Defense projects, his son said.

He died in August 1981, the same year his letter was published publicly offering to share his story in the hope “that this part of World War II history should not be forgotten.” Four decades later, he has helped to make sure it never will be.