by
Kevin Maurer
• Special to The Washington Post • November 1, 2021 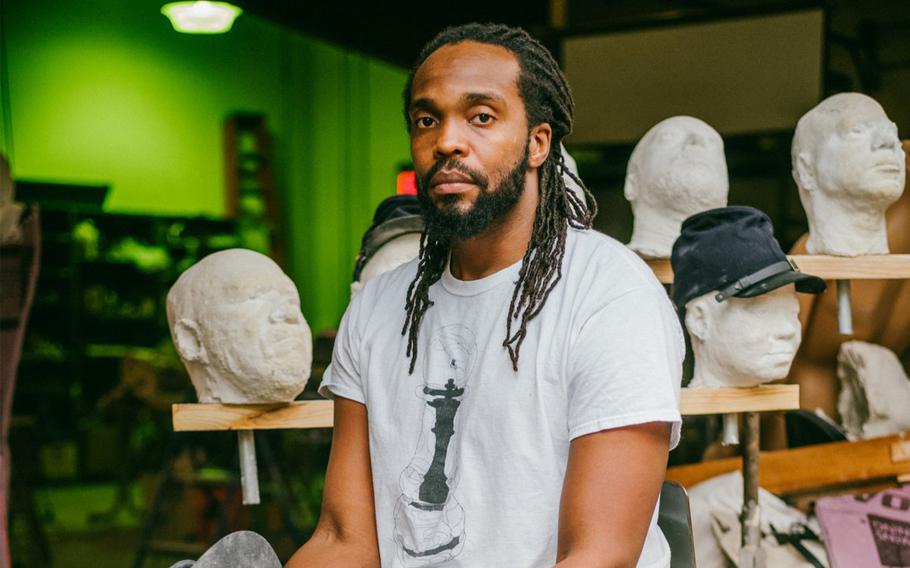 “Boundless,” by North Carolina artist Stephen Hayes, shown, will be unveiled this month at the Cameron Art Museum in Wilmington, N.C. — and it aims to put forward a new story line about African Americans during the Civil War.  (Cameron Art Museum Facebook)

In the early 1900s, two Civil War memorials — both honoring the Confederacy — were erected in the busy downtown district of Wilmington, N.C. They were meant largely to send a message of intimidation to African Americans and "carpetbaggers," Northerners who came to the South during reconstruction — and there they stood for a century.

Five miles away, Heather Wilson, the deputy director of the Cameron Art Museum, wanted to tell a different story about the city. The U.S. Colored Troops, 80% of whom were formerly enslaved men from the South, accounted for over half of the more than 2,000 Union casualties in the battles for Wilmington — one of which had taken place on the museum's grounds. Yet there was no monument honoring them.

"These men fought for their freedom, here, where the museum stands, and this is vitally important to who we are as a community," Wilson said. "I want children to stand at the sculpture and look up and be inspired by the proud face of the soldiers and think: That could be me. That man looks like me."

And so, while the nation continues to take down Civil War monuments — including the statue of Gen. Robert E. Lee in Richmond, which was removed in September, and the two statues in Wilmington, which were removed last year — the museum is installing a new memorial that recognizes the sacrifices of Black soldiers in the Union Army. "Boundless," by North Carolina artist Stephen Hayes, will be unveiled this month — and it aims to put forward a new story line about African Americans during the Civil War.

"As a Black man in America, you see the imagery of a Black person in chains, being whipped, begging, kneeling and helpless," Hayes told StarNews, a local media outlet. "This project is important to me because, as a creator, I get to change that narrative — by giving Black soldiers a sense of honor and pride."

The Cameron Art Museum was built on the site of the Battle of Forks Road, part of the Union campaign to take the South's last seaport. The Fifth Regiment of the USCT acted as the vanguard. The Confederates, who had been entrenched behind an earthen berm that still stands today, fought off the first assault but withdrew afterward, opening a path to the city. A few days later — as the USCT marched into Wilmington singing "John Brown's Body" and cheered on by Black and white citizens alike — a Black woman embraced one of the soldiers in the USCT ranks. It was her son, who had escaped Wilmington, only to return as a free man and liberator. Lee surrendered to Gen. Ulysses S. Grant 46 days later, in Virginia.

Historian Chris Fonvielle, credited with uncovering the Confederate earthworks in the 1980s and naming the battle, has been working to document USCT combat sites in North Carolina; four of the six are in the vicinity of Wilmington. He hopes Hayes' sculpture will change people's understanding of the USCT and the role it played in the Union victory. "In the end, the right side won," Fonvielle said, "and African Americans contributed mightily to that effort."

After the Civil War, Wilmington grew into a mixed-race community with a thriving Black middle class, but that middle class was destroyed in 1898, when a coup — orchestrated by White politicians, newspaper publishers and Civil War veterans — removed a fusion government supported by Black voters. Between 60 and 300 Black people were killed and about 20 were banished from the state. After the coup, African Americans fled the city, and their property was confiscated.

More than a century later, racism here has never gone away. Last year, the Wilmington police department fired three officers after they were caught on video exchanging racist and threatening remarks.

After the art museum asked Hayes to be part of the project, he read up on the battle and submitted a few concept drawings of the sculpture. His vision for "Boundless" included a series of life-size bronze statues depicting the three ranks of USCT soldiers, along with a color guard and a drummer, marching toward the Confederate fortifications. Hayes and the museum put out a call asking descendants, veterans and reenactors to sit for a casting.

"These men were here to fight for their freedom, but then also, where does it go today or in the future?" Hayes said. "I was thinking: What if I cast a bust of the descendants of the soldiers and have them be a part of it because it still creates that story of now and progress and seeing how far we've come? It's telling a story, and I'm also creating a place for relatives and family members to want to come to" — a place where they can honor ancestors who "helped fight for our freedom."

Indeed, "Boundless" is more than a collection of statues. It is an attempt by the Wilmington community to step out of the shadow of racial violence. "Wilmington," Fonvielle said, "is coming to grips with how badly Blacks were treated for 150 years."

Hayes said the piece — which, in addition to the statues, features the sound of soldiers singing and marching via a QR code - speaks not only to the bravery of the troops, but to the power of community. "If it brings a sense of healing, I welcome that," Hayes said. "At the end of the day, my art is here to create a conversation and allow people to speak out together."