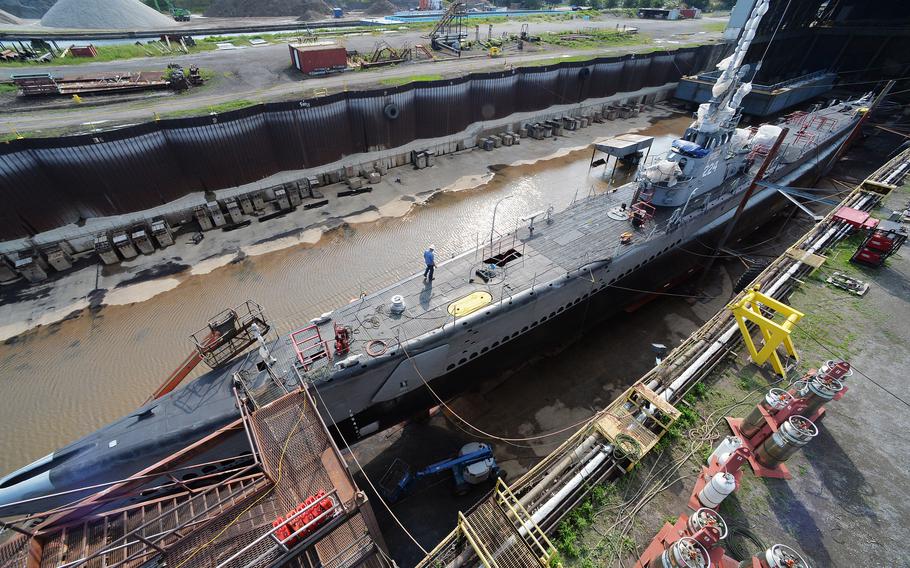 Repairs are nearing completion on the USS Cod submarine, shown on Wednesday, docked at Donjon Shipbuilding & Repair in Erie. The floating museum is usually docked in Cleveland and is ending about 6 weeks of steel hull repair and other maintenance. (Greg Wohlford, Erie Times-News/TNS)

(Tribune News Service) —The USS Cod is now battle-ready, so to speak.

The historic World War II submarine for the past eight weeks underwent hull repairs at Erie's Donjon shipyard and will be towed back to its Cleveland pier.

Paul Farace, president of the USS Cod Submarine Memorial, said an actual hour of departure is yet to be determined and will depend on weather conditions and whenever its designated tugboat arrives.

Farace said he had hoped to briefly open the Cod to public tours in Erie but was unable to get a tow to a public pier and axed the idea.

A welcome home reception is planned for the public on Aug. 21, at 1 p.m., at the Cod's home dock in Cleveland's North Coast Harbor.

The Cod, which functions as a floating wartime museum in Cleveland, arrived in Erie — via tugboat — on June 14, a 12-hour voyage that involved crossing 105 miles of water.

It was the vessel's first voyage since its last drydocking in 1963 in Lorain, Ohio.

The Cod underwent a major overhaul of its underwater hull and torpedo tube shutters, mostly to remedy pitting of the sub's metal skin, a type of corrosion caused by years of saltwater and freshwater exposure.

Rick Hammer, general manager of Donjon, said the submarine, upon its arrival, was already taking on water.

"In the mid-body, there were parts of the side shell with punctures and holes, and some of the steel was wasted away," he said. "So we replaced the steel, put some new framing and patching on the hull to seal any hole or puncture." 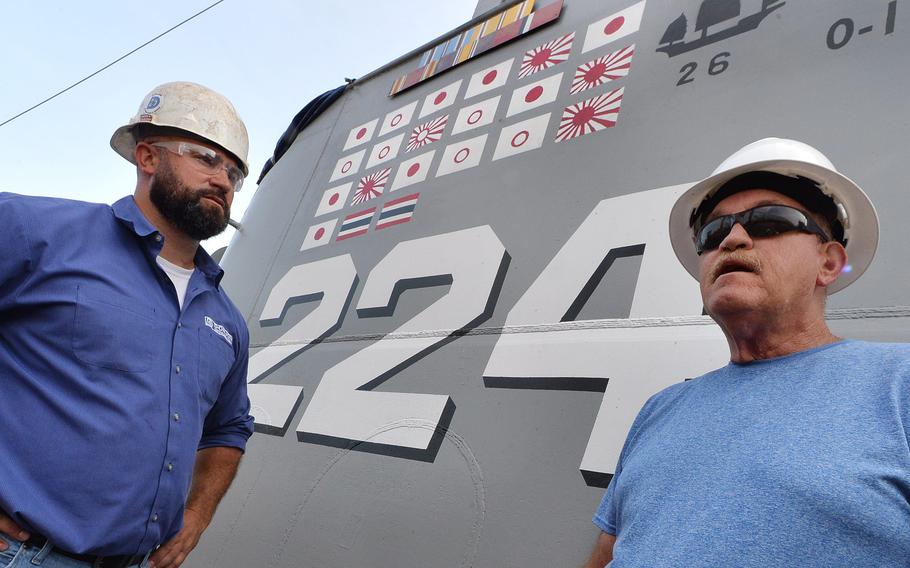 Donjon Shipbuilding & Repair project manager Matt Ross, 40, left, listens as chief of the boat Darrel Flint, 58, describes the enemy flags painted on board the USS Cod on Aug. 11, 2021, in Erie. The floating museum is usually docked in Cleveland and is ending about 6 weeks of steel hull repair and other maintenance. (Greg Wohlford, Erie Times-News/TNS)

Hammer said workers also made repairs to the stern, bow and areas around the torpedo tubes that had rotted away.

The combined work, he added, will no doubt prolong the life of the vessel for the foreseeable future.

"We've done much larger projects before, but in terms of prestige, I think all the workers felt privileged to be a part of this," Hammer said. "This is naval history and we were able to play a role in prolonging it and hopefully getting more people a chance to appreciate what was done to get us where we are today."

Farace said it was "eye-opening" to see the submarine completely out of the water on the Donjon dock.

"We realized that she was not just a memorial ship tied to a pier but a sleek warship built for going into harm's way," he said. "It was sort of like grandkids accompanying their grandfather to a military reunion and seeing him as a warrior for the first time."

The voyage and overhaul were made possible in part by a Save America's Treasures grant, managed by the U.S. National Park Service, and by donations from the Sherwin Williams Company, veterans groups and private citizens. 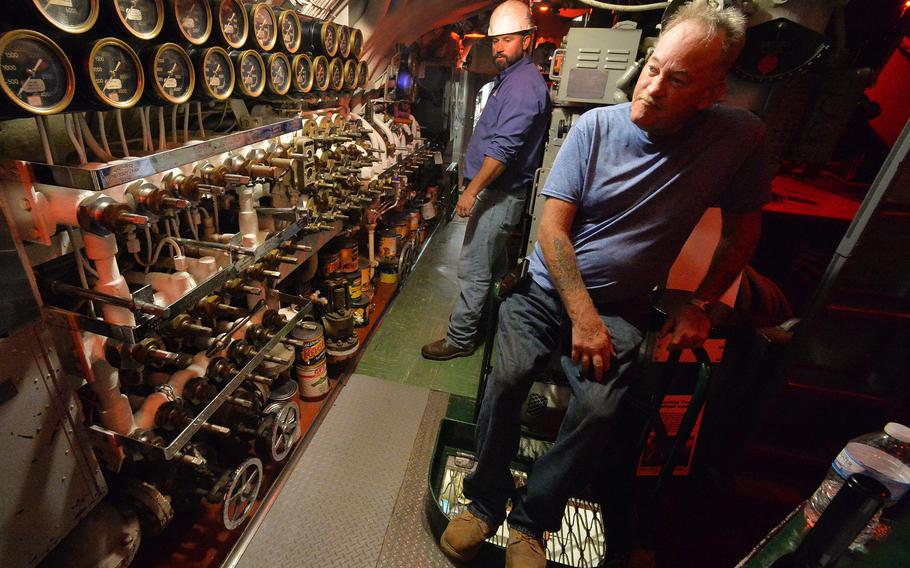 Chief of the boat Darrel Flint, 58, right, pauses while working inside the USS Cod submarine on Aug. 11, 2021, at Donjon Shipbuilding & Repair in Erie. Donjon project manager Matt Ross, 40, is at back. Flint worked on the main air system after a local power outage temporarily stopped repairs. (Greg Wohlford, Erie Times-News/TNS)

The Cod, launched in March 1943, conducted seven war patrols in the South Pacific and sank roughly 36,000 tons of enemy shipping.

It also performed history's only international submarine-to-submarine rescue, when it saved the crew of the Dutch submarine O-19 after it got stuck on a reef in 1945.

"For three days, the Cod was kind of a joint Dutch-American submarine," Farace said. "The Dutch were really touched by that and they adopted Cod as an honorary Dutch submarine."

The Dutch flag still flies at the Cod Memorial site in Cleveland.

The Cod was decommissioned in 1946, reactivated in 1951 and mothballed again in 1954. It was later towed through the newly opened St. Lawrence Seaway en route to Cleveland in 1959, where it served as a training vessel until 1971.

The Navy granted guardianship of the ship in 1976 to the Cleveland Coordinating Committee. Ten years later, the U.S. Department of the Interior designated the ship a National Historic Landmark. Since then, the submarine has been open to public and private tours.

The Cod will reopen to public tours, from 10 a.m. to 5 p.m., as soon as the gangway is installed in Cleveland. Tours will continue through October.