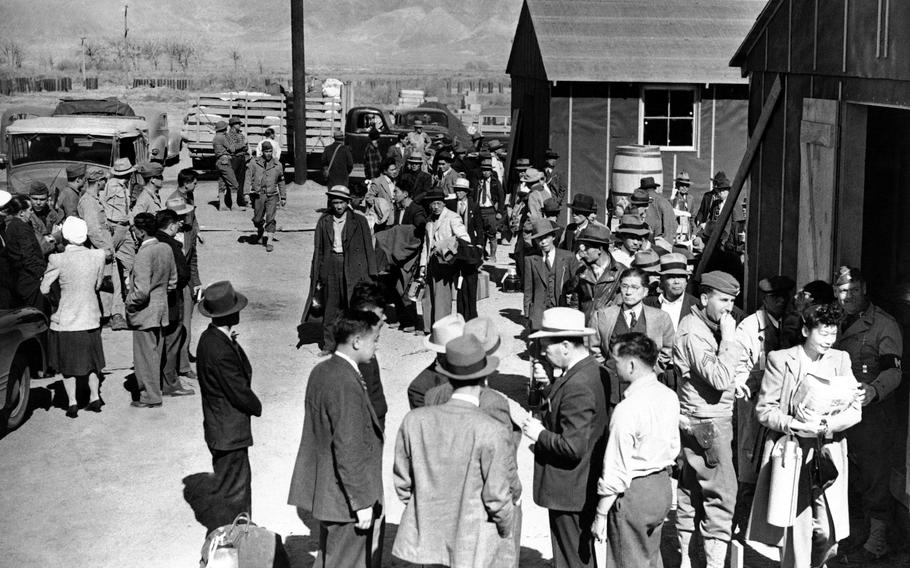 This March 23, 1942, photo shows the first arrivals at the Japanese evacuee community established in Owens Valley in Manzanar, Calif. Roughly 120,000 Japanese immigrants and Japanese-Americans were sent to camps that dotted the West because the government claimed they might plot against the U.S. (AP)

Starting July 24, the downtown museum presents "Righting a Wrong: Japanese Americans and World War II." An addition by the Missouri Historical Society, which operates the museum, explores St. Louis' contributions to the legacy.

The 1941 Japanese attack on Pearl Harbor, the first modern attack on U.S. soil, left the nation in a state of paranoia. In particular, there was concern that Japanese Americans were harboring sympathies for the Japanese government.

This fear resulted in a 1942 executive order signed by President Franklin D. Roosevelt, enabling the U.S. government to relocate people of Japanese descent from the West Coast to internment camps.

"As a military museum, it is important to look not only at conflicts and battles, but at how we conduct ourselves as a people when we go to war," says Mark Sundlov, the museum's managing director.

Approximately 75,000 Japanese Americans and 45,000 Japanese nationals were relocated and spent the duration of World War II in poorly built camps far from home. The "Righting a Wrong" exhibition conveys this history through photographs and personal items that belonged to the people who were imprisoned.

Sundlov highlights the importance of one such item, a duffel bag: "When a family was relocated, they could bring only what they could carry." In that bag, the Iwata family had to pack their whole lives as they were forcibly moved from California to Arizona.

Some Japanese Americans were able to avoid the internment camps by enrolling in higher education programs. Notably, St. Louis architect Gyo Obata attended Washington University in order to avoid relocation; it was one of the few universities accepting the students at the time. Obata also served in the U.S. military from 1946 to 1947 and co-founded the global architectural firm HOK.

Gyo's and other St. Louisans' connections to the story of Japanese internment camps will be discussed in a series of articles on the Missouri Historical Society website. They will be accompanied by a series of public events, including the virtual "How the Hattoris Became St. Louisans: One Family's Incarceration during WWII," led by Robin Hattor, at 6:30 p.m. July 22.

"Righting a Wrong" will be on view in the lower-level gallery at Soldiers Memorial, which unveiled a renovation in 2018. It will be the second such exhibition to be featured in the gallery.

Sundlov says these stories — of both tragedy and perseverance — are worth retelling and reflection.

"(The exhibition) deals with immigration, prejudice, civil rights, heroism and the meaning of being an American," he says.