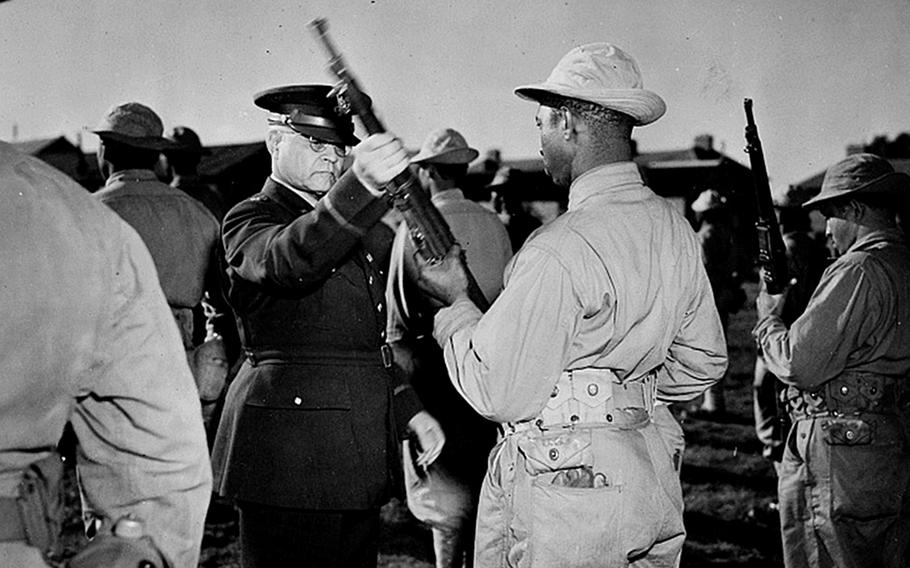 Brig. Gen. Benjamin O. Davis Sr. inspects the rifle of a U.S. African American soldier somewhere in England, probably in 1942. In September 1942, Davis was assigned to the Europe on special duty as an adviser on issues involving Black soldiers. In 1943, a bloody battle between Black and white U.S. soldiers took place at Bamber Bridge, England. (Library of Congress)

A bloody, little-known battle between Black and white U.S. soldiers in northern England 78 years ago forced a reckoning over the military’s unequal treatment of minority troops.

Known as the Battle of Bamber Bridge, the conflagration in Lancashire was sparked late on June 24, 1943, after a pair of U.S. military police patrolmen responded to a reported “disturbance” at the thatch-roofed Ye Olde Hob Inn pub, military records show.

What began as an altercation over two Black soldiers who were found wearing field coats instead of the prescribed Class A uniforms turned into a five-hour riot, with some troops barricaded on base and others in “marauding parties” patrolling the town’s streets and shooting sporadically, a Judge Advocate General board of review record of the 1943 court-martial trials states.

The military police responded in a convoy, including an armored vehicle with a mounted machine gun, which drew a reaction from the Black soldiers who believed the police intended to kill them. By the time it was over, one soldier was dead and several others were wounded.

There were dozens of racially motivated clashes between American troops in England during the war, but Bamber Bridge was significant in that it prompted the top leadership there to try to address racial inequality, retired Air Force officer Alan M. Osur wrote in a history pamphlet titled “Separate and Unequal,” which the service published in 2000, about racial disparities during the war. 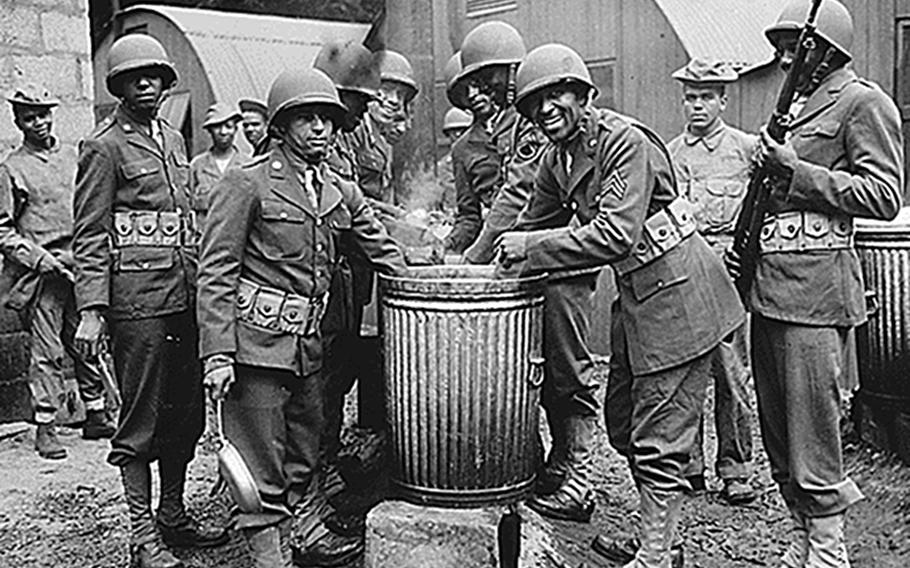 African American soldiers draw rations at the camp cook house at their station in Northern Ireland in 1942. There were a number of racially motivated clashes between Black and white U.S. troops in the United Kingdom during World War II, according to a history pamphlet by retired Air Force officer Alan M. Osur. (National Archives) 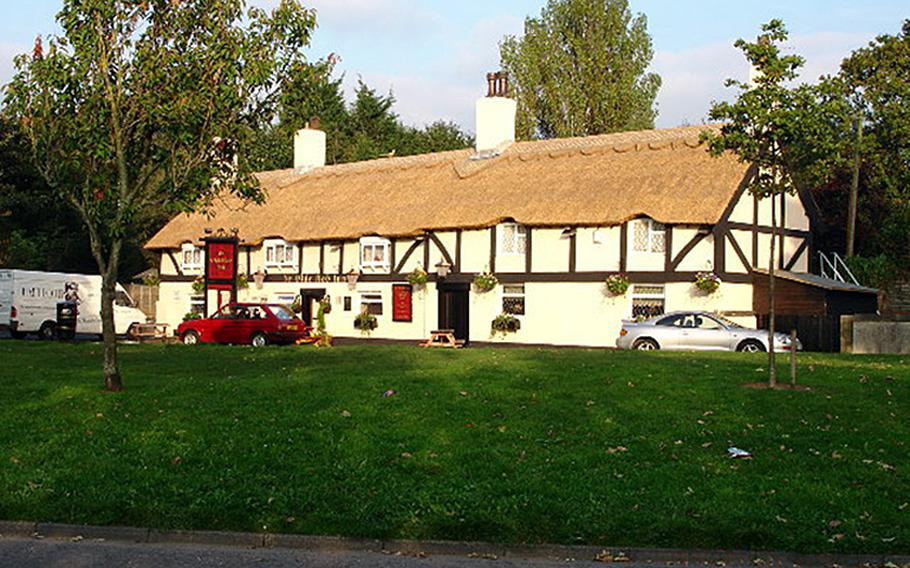 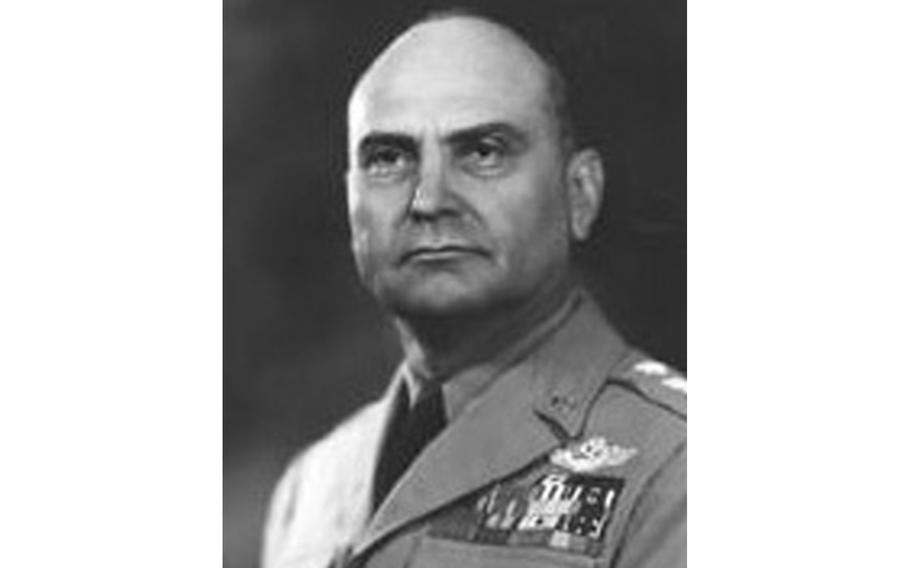 Gen. Ira Eaker was the commander of 8th Air Force in England at the time of the Battle of Bamber Bridge, a bloody fight between Black and white U.S. soldiers in northern England 78 years ago. Eaker was credited with disciplining dozens of white officers involved and creating racially mixed military police patrols, among other actions. (U.S. Air Force) 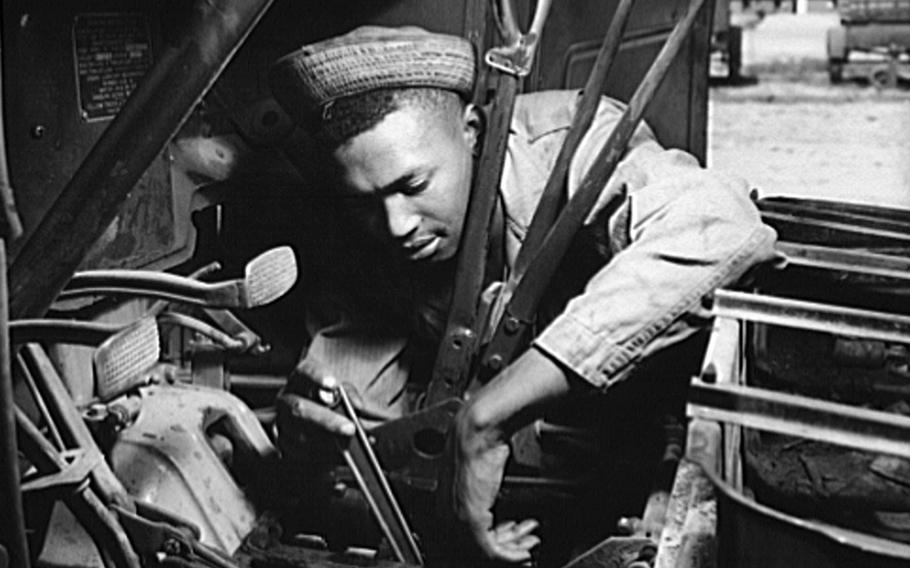 An African American soldier, who serves as a truck driver and mechanic, works on a transmission at Fort Knox, Ky., in 1942. In 1943, a bloody battle between Black and white U.S. soldiers took place at Bamber Bridge, England. Several of the Black soldiers were in transportation units. At the time, military units were segregated, with Black units mostly having white commanders. (Library of Congress)

The situation was likely fueled by news of a riot in Detroit days earlier that left over two dozen Black people dead at the hands of police, Pamela E. Walck wrote in a 2015 doctoral dissertation about WWII-era race conflicts.

In Bamber Bridge, after a scuffle at the pub between the MPs and Black soldiers from a quartermaster truck regiment, the outnumbered MPs retreated to their station for reinforcements. When they returned to find the soldiers walking back to Adams Hall Camp and tried to arrest one of them, the group resisted, resulting in what military records described as a “melee.”

Two MPs were wounded by thrown rocks and bottles, and two Black soldiers were shot by the police. Soon rumors of the violence reached base, where “hysteria swept through the post” and dozens of soldiers raided arms rooms and grabbed rifles, carbines and ammunition, court records state.

Before midnight, some 200 soldiers gathered at the camp’s main entrance, with about 25 of them armed with rifles.

“Some wore helmets and they were indiscriminately clad in ‘Class A’ uniforms and fatigues,” the court records say.

Their frenzy “fore-shadowing a spirit of active violence” soon became “passive disobedience” as they decried unfair treatment by the MPs and broader discrimination “alleged to have been inspired by white American troops,” the records state.

Blacks in the service at the time endured “friction” over the use of recreational facilities, interracial dating and “the resistant attitude of some leaders which affected military justice and training,” Osur wrote in 2000. But the British public gave them “relatively fair treatment.”

Anthony Burgess, author of the book “A Clockwork Orange,” taught in Bamber Bridge after the war, writing in his autobiography that when U.S. military authorities demanded local pubs institute a “colour bar,” the owners barred white troops.

“There used to be one pub that had a notice saying, OUT OF BOUNDS TO WHITE SOLDIERS, but that was stopped by Washington or somebody,” Burgess wrote in a 1973 New York Times article.

Burgess also wrote that the locals would tell of the time during the war that “black troops held the camp with machine guns against whites, though this never got into the newspapers.”

Nearly 30 of the Black soldiers would eventually be convicted on charges related to assault, riot and mutiny, but it also forced Gen. Ira Eaker, commander of the Eighth Air Force, to grapple with the mistreatment.

Eaker “realized that ‘90 percent of the trouble ... was the fault of the whites,’” and directed his staff officers to address the problem, a statement that Osur said “was almost without equal among AAF generals.”

His efforts resulted in the reorganization of Black units, removal of a group of 75 mostly white officers, joint white and Black MP patrols, “the airing of justifiable grievances” and other measures, Osur wrote.