Visit from US forces injects cash into African economies 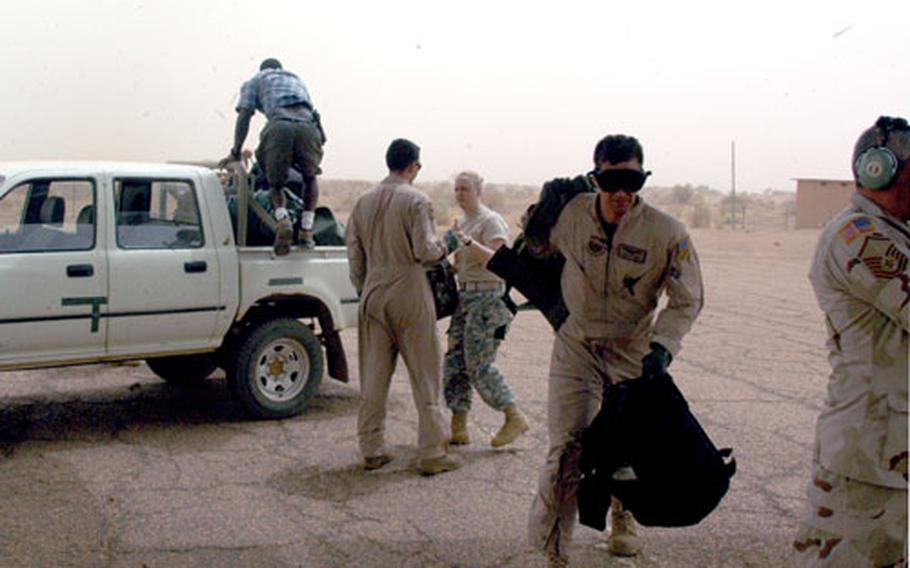 U.S. troops in Goa, Mali, hustle to transfer their gear from trucks to a waiting U.S. Air Force Special Operations C-130. The goal of a current joint operation with Mali is to train its military to secure its boarders and fight terrorism. (Bryan Mitchell/Stars and Stripes)

DAKAR, Senegal — Simply by arriving in this country, where the average person takes home in a year less than the average American earns in a month, the U.S. military made a positive impact via the infusion of foreign cash.

The RAF Mildenhall-based 352nd Special Operations Group was headquartered out of a U.S. State Department facility near the capital’s international airport, but stayed in locals hotels, were shuttled about town via rented Sport Utility Vehicles and bought jet fuel at the airport.

The unit even spruced up a rural, formerly defunct airstrip, employing local labor to clear acres of brush around the landing zone.

In neighboring Mali, where joint Special Operations teams worked to foster good relations with the local military and civilian populace as part of the military’s global campaign against terrorism, a tour of the Malian air force bore witness to the spoils of an era when the West African desert nation witnessed a different style of foreign interest.

Parked sharply in a steel hangar, nearly a half-dozen camouflage painted Soviet-era MiG-21 fighter jets stand at the ready — to go absolutely nowhere. Only one jet was still flight-worthy because the Malians lack the resources and technical capabilities to maintain the small fleet.

One of the few local pilots qualified to fly the jet fired it up and performed a low-altitude flyby as the Americans were working nearby.

“We were all looking around wondering what was happening,” said a U.S. Army officer. “It really shook the place up.”

While Senegal and Mali have enjoyed peaceful elections for more than a decade and are generally recognized as law-abiding nations, some of the other countries set to receive U.S. military training and equipment to fight terrorism have questionable human rights records.

Congress has required the U.S. State Department to work alongside the Department of Defense in facilitating and monitoring the military involvement in Africa.

Col. Brian Cutts, deputy commander of the 352nd, acknowledged the challenges presented by working with countries like Chad and Niger, but said engaging and observing them on the ground is less dangerous than allowing them to fester from afar.

“If we don’t go there, it’s a test tube we are not monitoring,” he said.

Watch out for hippos

In Africa, an ongoing battle still exists with the natural habitat for survival.

Hippopotamuses are considered to be one of the most dangerous animals on the country and military members were told by locals in Mali that they remain one of the leading killers of men in the country.

“If you’ve got an animal that even the croc don’t mess with, you got one bad hombre,” said a U.S. Army soldier.