From the archives, 2006: US steps in to train with Senegal’s military 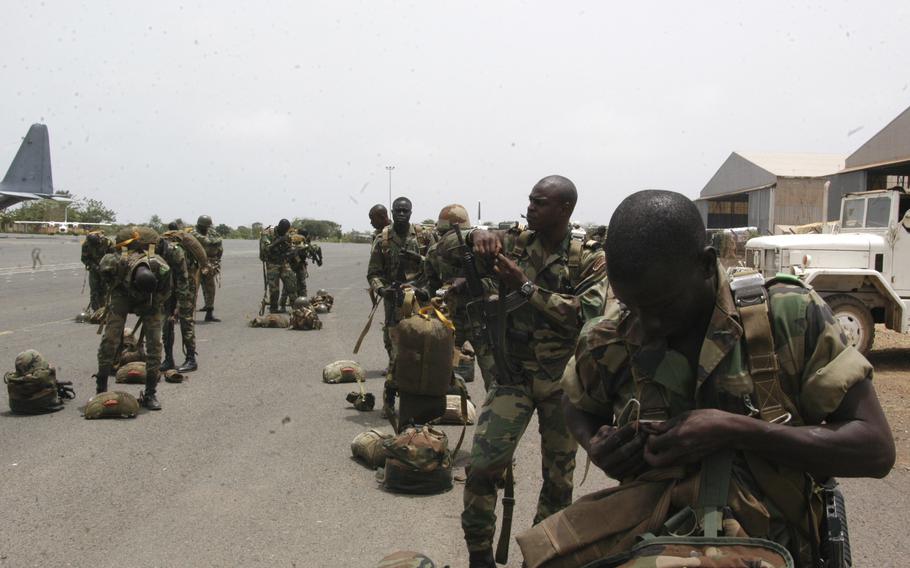 DAKAR, Senegal — It’s a touch past 1 p.m., and the African sun scorches the flight line on the military side of the city’s international airport, where nearly two dozen Senegalese soldiers are lined up to board a U.S. Air Force special operations plane.

The elite troops — who refer to themselves as paratroops and commandos — are making the final preparations of their gear, goods and gumption before they board the MC-130.

A few feet away, a handful of Army Special Forces soldiers ready themselves for what will be their eighth jump in the past several weeks alongside the Senegalese troops.

The airborne troops had been jumping out of the Senegalese air force’s Focker 27, but the collaboration with the U.S. Air Force means the troops will forgo the Dutch-built Focker in favor of the American plane.

“They are very excited to do this. This will be their first time in the C-130,” said Abdou Toure, a retired sergeant major in the Senegal army who now serves as an interpreter and adviser to the Senegalese military.

The jump is much more than a joint exercise. It’s the result of military and diplomatic efforts that are intended to strengthen a relationship considered key to regional and global security. 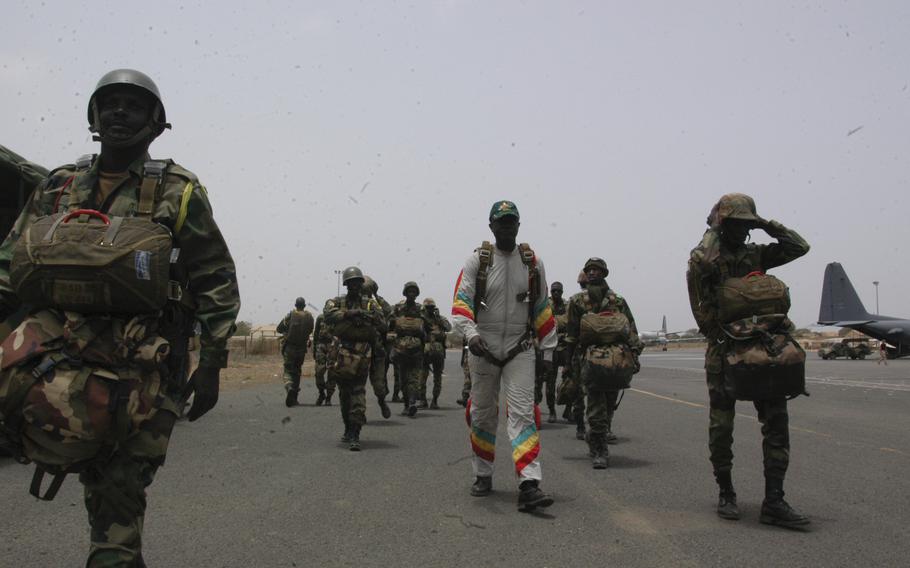 A month ago, the United Kingdom-based 352nd Special Operations Group planned to deploy its troops to another African country. But instability forced planners to scratch the deployment and scramble to find another country willing to take its troops on short notice.

U.S. Ambassador to Senegal Janice L. Jacobs helped orchestrate a joint operation to include the 352nd, the 10th Special Forces Group out of Fort Carson, Colo., and the Senegalese military.

“Senegal is probably one of our strongest partners in Africa,” Jacobs said moments before she boarded the plane to watch the soldiers jump. “And the military here is one of the most professional and disciplined on the continent.”

The mission is part of the Trans-Sahara counterterrorism initiative, a campaign that is lesser-known and vastly different piece of the military’s war on terrorism.

Unlike the central fronts in Iraq and Afghanistan, the military is deploying small numbers of troops to countries across the Saharan region to train indigenous militaries to combat burgeoning fundamentalist Islamic militias, according to 352nd deputy commander Col. Brian Cutts.

The hope is for those militaries — a predominately Muslim region that Washington fears could harbor al-Qaida fighters — to secure what are often unrecognized, colonial borders and thwart the free movement of thugs, bandits and rebels who move contraband across the region, U.S. military officials said. 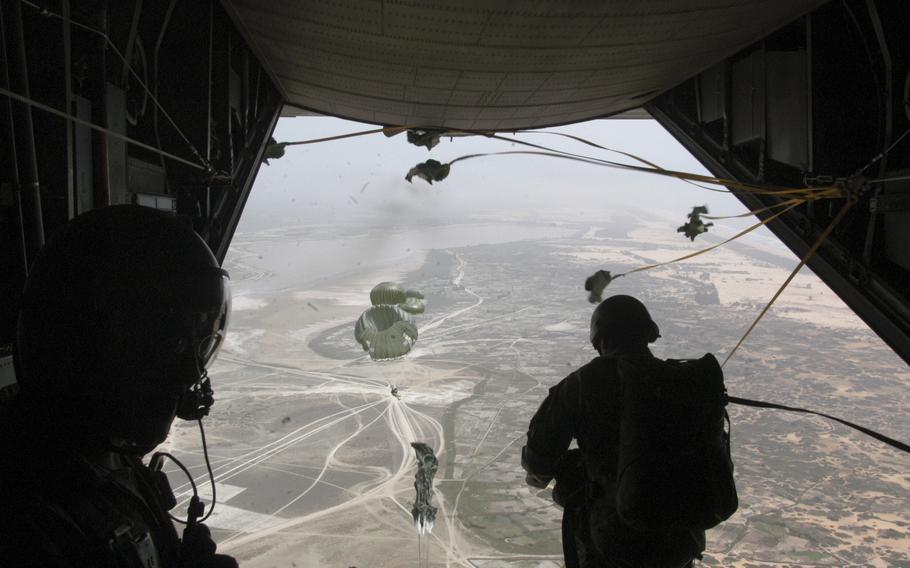 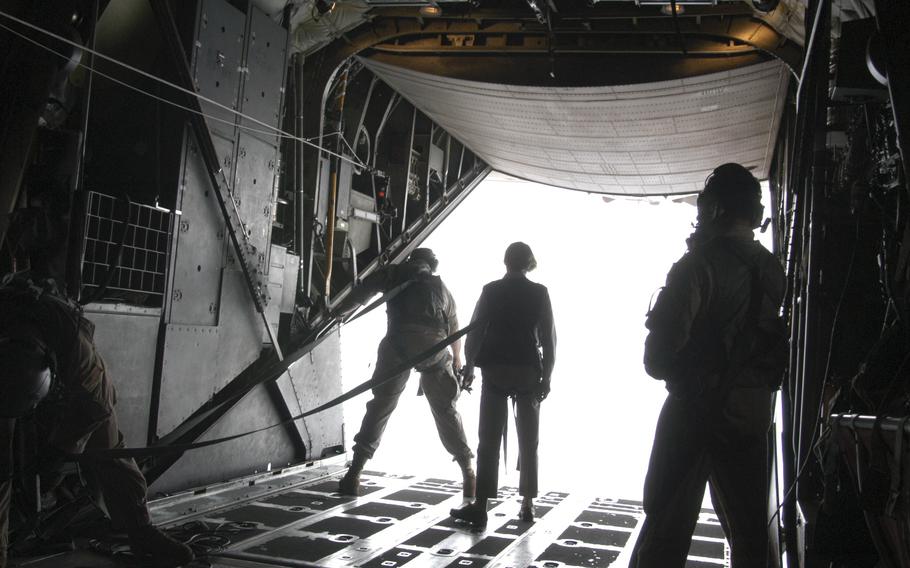 U.S. Ambassador to Senegal Janice L. Jacobs (center) stands near the edge of a C-130 Talon jumping platfrom as she watches a contingent of U.S. Army Special Forces soldiers skydive. She is flanked by two members of the U.S. Air Force 352nd Special Operations Group. (Bryan Mitchell/Stars and Stripes)

“We know this region is hugely important and that’s the reason for our being here,” Cutts said. “If you don’t have the cooperation of the locals, you have nothing.”

In Senegal, a largely secular country known for its religious tolerance, the U.S. has found a willing partner, according to Jacobs.

The country has long been involved in international peacekeeping. The majority of the troops who jumped Monday have been deployed to the Democratic Republic of Congo and Sudan for U.N. peacekeeping missions. And President Abdoulaye Wade hosted a Pan-African summit in 2002 focused on fighting terrorism on the world’s poorest continent.

“The Africans have said they want to be involved in halting conflicts on their own continent and increasing security,” Jacobs said.

Language: Official is French, but Wolof is largely spoken on the streets. 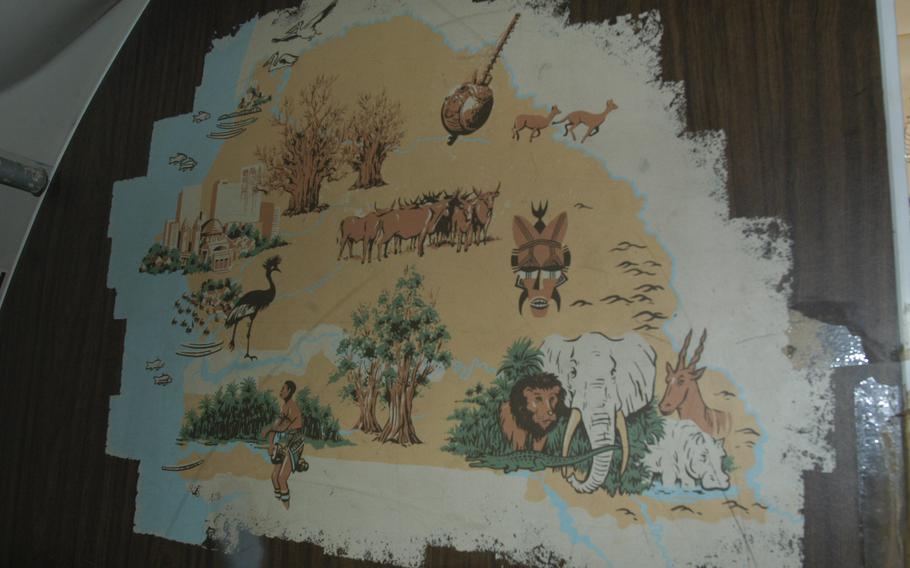 A map of Senegal, complete with drawings of the country’s rich animal habitat, adorns the wall of the Senegalese Air Force’s Focker 27 airplane. (Bryan Mitchell/Stars and Stripes)