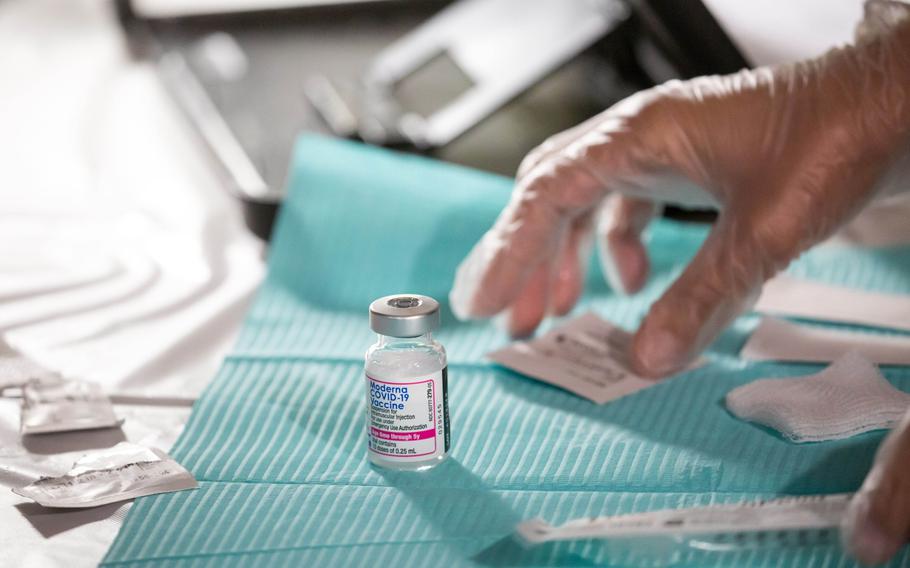 A healthcare worker prepares a dose of the Moderna coronavirus vaccine at the Brooklyn Children’s Museum vaccination site. (Michael Nagle/Bloomberg)

The Food and Drug Administration is proposing a crucial change in the way the coronavirus vaccine is handled: Switching to a once-a-year shot that targets the strain expected to pose the greatest threat during the following winter — a system akin to what is used for the influenza vaccine.

The agency, in briefing documents released Monday for a meeting this week with its vaccine advisers, said evidence suggests that "moving forward, most individuals may only need to receive one dose" of a coronavirus vaccine "to restore protective immunity for a period of time." The change in strategy will be one of the topics discussed at the meeting, scheduled for Thursday.

The proposed change is designed to reduce the complexity of the vaccine regimen for the public, doctors and manufacturers. It also reflects a view that "chasing variants" with ever-changing booster formulations is ultimately futile, in part because the public has little interest in getting repeated injections, according to a person familiar with the situation who spoke on the condition of anonymity because they were not authorized to speak publicly about it.

The FDA would choose the annual strain for the shots every June, in time for the updated shots to be manufactured and then administered in September, as part of a yearly inoculation campaign. The goal would be to select the strain most likely to be dominant in the winter, when people are indoors and COVID cases typically rise.

If there were an emergency — such as the appearance of a variant that was more dangerous and also capable of evading immunity — the FDA would call an impromptu meeting of the vaccine advisers and select a new strain to counter the threat, the agency indicated.

While most people would get an annual shot, under the new plan, people who are older or very young, immunocompromised or have serious health problems might need two doses, the FDA briefing document said.

The agency last fall authorized an updated bivalent vaccine that targeted the original strain of the virus and omicron subvariants BA.4 and BA.5. But by the time the booster was released, another variant was ascending rapidly. Moreover, the uptake on the vaccine has been low even among older people who are most vulnerable. Less than 40 percent of people 65 and older have received the updated shot, the Centers for Disease Control and Prevention says.

The FDA, according to the document, also is seeking to retire the original vaccine formula that entered the market in late 2020 — the monovalent that focuses on the original virus. That means the updated, bivalent booster would be used both for the original two-shot series of the vaccine and for the booster — until a new strain is chosen.

"This simplification of vaccine composition should reduce complexity, decrease vaccine administration errors due to the complexity of the number of different vial presentations, and potentially increase vaccine compliance by allowing clearer communication," the FDA said.

The FDA's shift in strategy was first reported by NPR.

Scientists say they have learned that a vaccine provides the strongest protection against the virus for the first three or four months after injection. For some months after that, the shots remain protective against severe disease, but then the protection wanes. The hope is that the lowest level of protection will occur during the summer, when COVID-19 surges tend to be less severe.

The fact that many Americans have been infected with the virus should provide additional protection, scientists say.

The FDA has been criticized by some, including members of its vaccine advisory committee, for pushing for broad use of variant-specific boosters to stave off COVID. Paul A. Offit, a member of the panel who is a vaccine expert at Children's Hospital of Philadelphia, wrote in the New England Journal of Medicine recently that it is fruitless to try to "prevent all symptomatic infections in healthy, young people by boosting them with vaccines containing mRNA from strains that might disappear a few months later."

Offit said such boosters should be reserved for older people, or those who are immunocompromised or have multiple medical conditions.

But Peter Hotez, dean of the National School of Tropical Medicine at Baylor College of Medicine in Houston, expressed concerns, saying he is not sure that an annual flu model will work for COVID, in part because mRNA vaccines don't last an entire year and because more needs to be learned about variants.

"There may be too many unknowns," he said.