Amid low demand, global coronavirus vaccination set to slow in 2023

For much of the pandemic, the main obstacle to vaccinating the world against the coronavirus was a lack of supply, as wealthy nations bought up vaccine doses and logistical bottlenecks hampered access for the poorest countries.

But increasingly, global vaccination efforts — spearheaded by Covax, a vaccine-sharing initiative backed in part by the World Health Organization — face a problem just as complex: a lack of demand. Backers of Covax say they have seen a sharp decline in dose orders, including in countries with relatively low vaccination rates.

This decline, fueled in part by pandemic fatigue, could prove the biggest obstacle to vaccination initiatives worldwide in the year ahead.

In South Africa, for instance, where President Cyril Ramaphosa less than two years ago called out wealthy nations for buying “up to four times what their population needs,” daily vaccination numbers have plummeted since the summer, and millions of doses were thrown away unused in the latter half of 2022. But only a third of South Africa’s population is fully vaccinated against the coronavirus, according to government figures.

Seth Berkley, chief executive of Gavi, the Vaccine Alliance, told The Washington Post that because of lower demand, Covax expects to deliver about 400 million doses around the world in 2023 — less than half of the billion or so annual deliveries it made, mainly to lower-income countries, in 2021 and 2022.

While lower-income nations once clamored for doses, they have begun to scale back vaccine orders, with many of the most vulnerable already immunized and a general feeling in much of the world that the worst of COVID-19 has passed — China’s ongoing surge aside.

Covax, which sought to use a combination of charitable donations and market forces to ensure a supply of coronavirus vaccine doses to low- and middle-income nations, was a key source of doses for many poor countries. But as vaccinations slow down in rich countries, poorer nations aren’t catching up.

Some countries, including Nigeria and Ghana, have moved to end emergency mass coronavirus vaccination efforts and instead include coronavirus vaccination in routine immunization programs — even though both nations are far off the WHO-backed goal of 70% of their population vaccinated, with barely a quarter having received the initial immunization regimen and far fewer boosted.

Only 20% of the population in low-income countries was fully vaccinated as of mid-December, according to data compiled by Our World in Data, and less than 2 booster shots per 100 people had been administered across the population in those countries.

The figures are far lower in some low-income countries.

Many countries made “very, very substantial progress” over the past year, with the number of countries below 10% coronavirus vaccine coverage down from 34 in January 2022 to seven now, according to Kate O’Brien, head of the WHO immunization program. In some of those countries, including the Democratic Republic of Congo and Haiti, programs are hampered by humanitarian emergencies, O’Brien said.

Surpassing 10%, if an achievement, remains a low bar. But experts point to a broader slowdown in highly vaccinated countries too, where takeup of boosters shots is slow.

“I think we’re seeing this globally as people say, gee, you know, this isn’t so much of a priority anymore,” said Berkley, one of the key architects of Covax, pointing to the slow uptake of booster shots in wealthy nations.

In the most recent month for which there are complete figures, November 2022, Covax delivered fewer than 29 million doses — less than a 10th of what it sent the same month the year before and its lowest number of deliveries since June 2021.

Demand is so low that in December, Gavi board members agreed to consider whether to effectively end Covax in its current format after 2023.

“We’re in a situation where it is country demand that is determining the shipments that are going out,” said O’Brien. “We’re not in a supply-constrained environment.”

When the vaccines were first rolled out about a year into the pandemic, several of them — such as those manufactured by Pfizer and Moderna — were to be administered in a two-shot regimen. Later, as new variants began circulating, wealthier nations such as Britain and the United States launched booster campaigns that included third and fourth shots, and beyond.

Coronavirus vaccinations have also slowed in the United States and Europe. One recent analysis by Philip Schellekens, a senior economic adviser at the World Bank Group who has tracked the global pandemic response, found that the coronavirus booster shot rollout across the world is proceeding at approximately half the speed of the primary vaccination campaign and even more unequally.

In China, where most of the 1.4 billion people have not been exposed to COVID, which is spreading rapidly after the easing of restrictions, authorities are scrambling to vaccinate at-risk groups, including the elderly. But so far, Beijing has not accepted offers for mRNA vaccines from the West, instead relying on less-effective, locally produced inactivated vaccines.

While data points to an overall slowdown, coronavirus vaccination rates remain much lower in poorer countries — a gap that alarms some experts, who note the weaker health systems and far lower rates of coronavirus testing in those countries, as well as the risk that new variants could emerge in under-vaccinated populations and spread beyond borders.

“As long as Africa lags far behind the rest of the world in reaching widespread protection, there is a dangerous gap which the virus can exploit to come roaring back,” WHO Africa Director Matshidiso Moeti said in October, as the organization released data showing that coronavirus vaccination coverage was stagnating in half of African countries.

Experts believe that a widespread perception that the omicron variant is less severe than previous versions of the coronavirus has led to lowered demand in other nations. The pandemic also caused severe economic disruption in many countries, upending health care systems — the United Nations warned earlier this year that global childhood immunization programs saw their worst backslide in a generation during the pandemic.

“We are a victim of our own success,” the WHO’s Moeti warned in October. “As vaccines have helped bring the number of infections down, people no longer fear COVID-19 and so few are willing to get vaccinated.”

Ayoade Alakija, a co-chair of the African Union’s African Vaccine Delivery Alliance, said that wealthy nations were sending the wrong message to other countries that were not as highly vaccinated and lacked access to effective treatments like Paxlovid, and that the claims about a lack of demand were “offensive.”

“You’re telling us the pandemic is over?” Alakija said. “It’s disingenuous.”

Estimates from analytics company Airfinity suggest that as many as 1.4 billion doses worldwide may have expired before they could be used since the start of the pandemic, in part due to the gap between growing supply capacity and slowing demand.

That’s a problem facing Covax, too. Berkley said that about 3% of Covax’s doses had been wasted during the pandemic, lower than many of its other immunization programs.

However, the organization was mindful that slowing demand could risk higher levels of waste. Gavi has renegotiated contracts with suppliers to re-designate some advanced purchase orders as options.

The organization is also in a dispute with Novavax over an agreement to buy 350 million doses for use with Covax. Gavi has said that the U.S. manufacturer had been unable to meet its commitment because of regulatory delays. Novavax has argued that Gavi has broken its contract.

Richard Hatchett, chief executive of the Coalition for Epidemic Preparedness Innovations and one of the creators of Covax along with Berkley, wrote in a recent year-end note that he was proud of Covax but acknowledged there was a need for deeper changes to the global vaccine system.

It was understandable that many in the world wanted to move on from covid, Hatchett wrote, but there was a big danger in that.

“Covid has changed dramatically in the short time we’ve been acquainted with it,” Hatchett wrote. “It would be foolhardy not to continue to monitor it.” 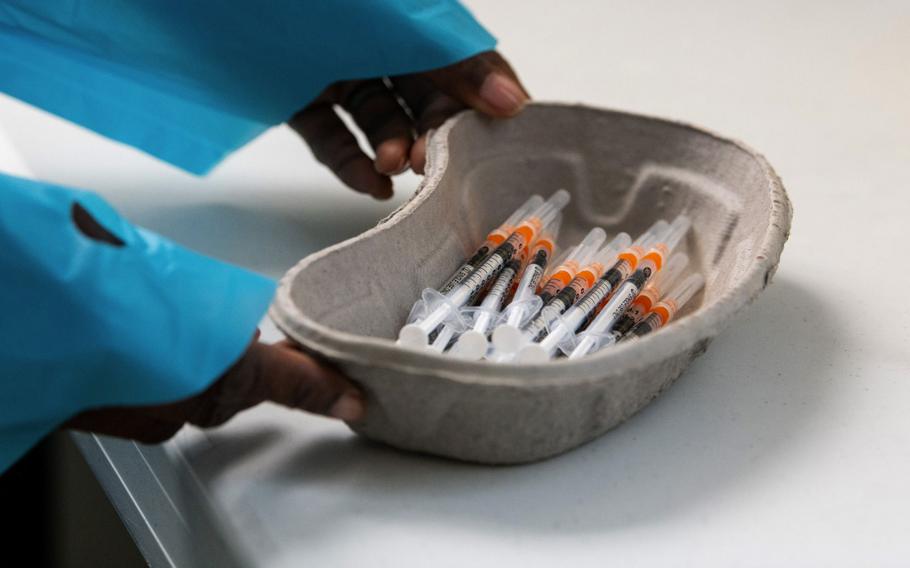 A health care worker places a dish of syringes near a vial of COVID-19 vaccine. (Benjamin Girette/Bloomberg)