They were expelled from the military for refusing the COVID vaccine; can they get back in? 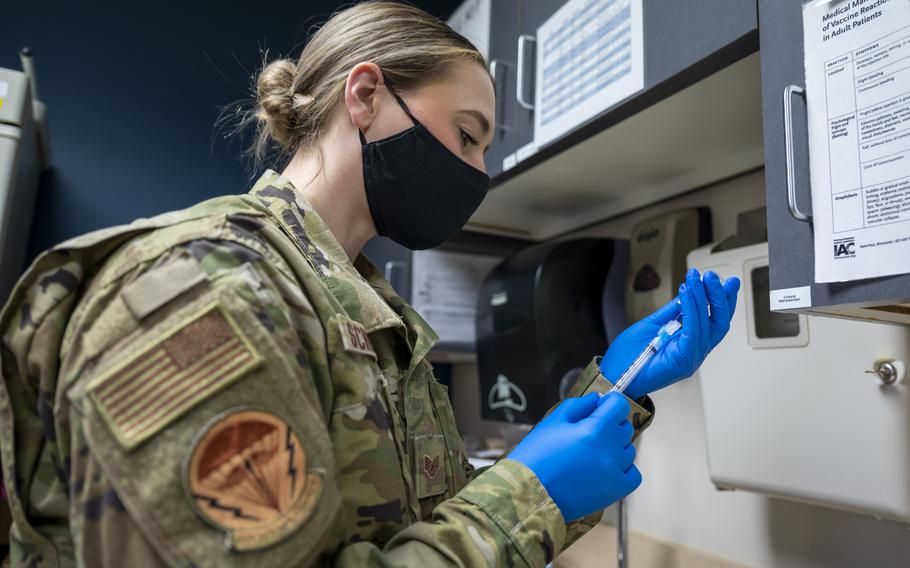 WASHINGTON (Tribune News Service) — The vote by U.S. House of Representatives to reverse the Pentagon’s mandate that troops be vaccinated against COVID raises another question: If the measure clears the Senate as expected, what happens to those drummed out of the military for defying the order to get the shot?

Even before the House approved the National Defense Authorization Act earlier this week, both Louisiana members high in the chamber’s leadership — House Minority Whip Steve Scalise and Republican Conference Vice Chair Mike Johnson — were saying the discharged troops should be reenlisted.

“The NDAA specifies the secretary of defense must end the mandate within 30 days of it becoming law,” said Johnson, of Benton. “To our great frustration, Democrats would not agree to include in this bill a resolution to the other critical questions.”

Louisiana’s only House Armed Services Committee member, Johnson represents Barksdale Air Force Base and Fort Polk. He said he will work in the new Republican House majority come January “to prioritize reinstatement of all service members wrongfully terminated or otherwise disciplined for objecting to the vaccine.”

The numbers aren’t clear, but estimates used by the House show about 37,000 members were discharged for refusing to be vaccinated, out of 1.36 million active personnel.

Scalise, the Jefferson Republican who becomes the agenda-setting House majority leader in January, asked Twitter followers Wednesday if they agree with his message: “ The Biden Administration must not block troops who were discharged for not getting the COVID vaccine from re-enlisting now that Republicans have gotten the mandate eliminated.”

But both the White House and the Pentagon have pointed out that each of the service members discharged had willfully disregarded a direct order. They contend that behavior can’t be tolerated in the armed forces, where combatants who start questioning their orders can end up getting themselves and others killed. Democrats in both the House and Senate have voiced no interest in going against the military on the issue.

Neither Johnson nor Scalise has a military service background. Rep. Clay Higgins, R- Lafayette, is the only member of the Louisiana delegation with such experience, having served in the U.S. Army and Louisiana National Guard. He and his office did not respond to a request for comment.

The defense authorization act provides $847 billion to pay for military needs ranging from salaries to tanks.

The measure also includes a provision to remove an August 2021 order by U.S. Defense Secretary Lloyd J. Austin III, a retired four-star Army general from Alabama, that requires most soldiers, sailors, airmen and other military personnel to get vaccinated. His order was approved at a time when the Delta variant of COVID filled hospitals and caused death rates to spike.

The authorization act also covers National Guard units. The Louisiana National Guard has about 11,000 members and spent 27 months responding to the COVID crisis after being activated by Gov. John Bel Edwards. The Guard would not say how many members quit or were discharged for refusing to be vaccinated.

Guard members throughout the state provided medical help, traffic control and testing-site support in the effort against COVID. They helped conduct more than 636,000 tests and delivered more than 234,000 doses of the vaccine.

Despite White House and Pentagon objections, House Democrats agreed with Republican demands to remove the vaccination requirement in hopes of moving the defense authorization bill, which must be passed by the end of the year.

The House approved the negotiated authorization measure Thursday on a vote of 350-80. The act now goes to the U.S. Senate, where it is expected to pass easily before Dec. 16, said U.S. Sen. John N. Kennedy, R- Madisonville.

Republican U.S. Sen. Bill Cassidy, a Baton Rouge physician, has noted scientific literature suggests that the latest COVID vaccinations don’t necessarily prevent infections but do minimize hospitalizations. People of military service age have not been going to the hospital at higher rates, he said.

Part of the Republican argument has been the vaccination order’s impact on recruiting and retaining troops.

“The legislation,” said U.S. Rep. Garret Graves, R- Baton Rouge, “repeals the COVID-19 vaccine mandate that numerous active-duty military constituents have reached out to our office expressing concerns about and has even challenged recruitment efforts. Even President Biden said three months ago that the pandemic was over — it’s time to stop punishing those serving and protecting our freedoms.”

Graves released statistics that showed how short the Armed Forces have been in hitting recruiting goals.

— Air Force: 5,000 airmen behind on next year’s goal, barely met this year’s target.

— Marine Corps: Had to increase retention and reduce recruiting targets this year to meet them.

Scalise has said the mandate has deterred people from going into the nation’s military service academies.

“We’ve talked to the military about getting a full assessment of all the people that were removed,” Scalise told Fox News. “Let’s get them reinstated. This ruined people’s military careers. Let’s get this addressed.”