Rollback of COVID-19 vaccine mandate met with frustration at Pentagon 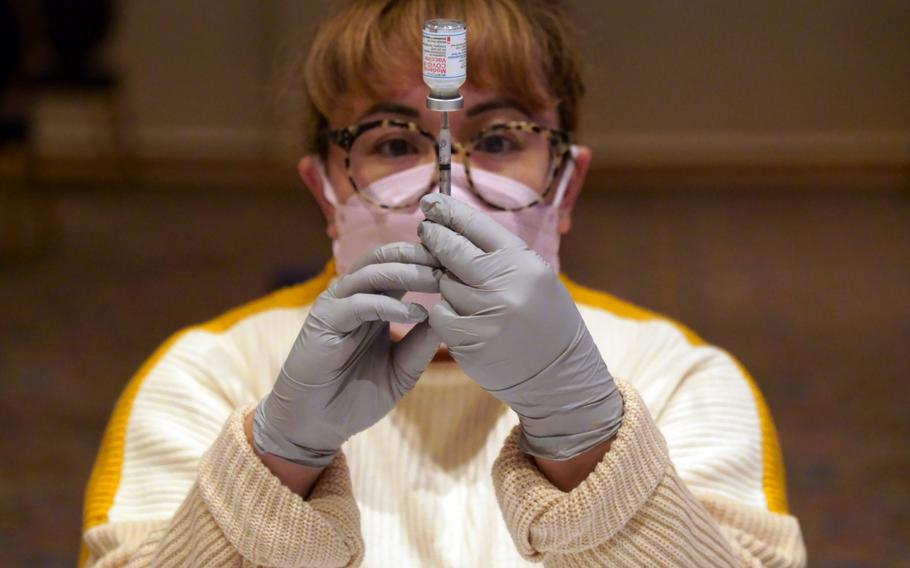 Laurie Fernandez, a nurse with Navy Medicine Readiness and Training Command at Yokosuka Naval Base, Japan, prepares a COVID-19 vaccine shot at the New Sanno Hotel in Tokyo, Feb. 16, 2022. (Akifumi Ishikawa/Stars and Stripes)

The Biden administration fumed Wednesday at the near-certainty that Congress will strip away the Defense Department’s requirement that all military personnel be vaccinated against the coronavirus, upending a politically divisive policy that has led to the dismissal of nearly 8,500 service members and numerous lawsuits disputing its fairness.

The agreement, brokered as part of the Pentagon’s next spending bill, was celebrated by Republicans as a victory for individual choice. It comes despite opposition from President Biden and Defense Secretary Lloyd Austin, who characterized the vaccine mandate as a way of protecting troops from Covid-19 and preventing sprawling outbreaks that sideline entire units, undermine the military’s readiness and endanger national security.

The looming reversal — spurred by Republicans who had threatened to block passage of the $858 billion spending bill if the mandate wasn’t struck down — creates a rat’s nest for the Pentagon. Commanders whose job it was to enforce the mandate will face the onerous task of assessing whether - and how - to allow back into uniform those already separated from the military for refusing to follow orders. Managing overseas deployments, especially in countries that require visitors to be vaccinated, will create burdensome logistical headaches as well, officials said.

John Kirby, a White House spokesman, would not say whether Biden would entertain vetoing the bill, the National Defense Authorization Act, if as expected the legislation passes both chambers of Congress with the repeal intact. But Kirby emphasized that the administration believes scrubbing the vaccine mandate is a “mistake” and castigated those in the GOP who pushed to end it.

Republicans, he said, “have obviously decided that they’d rather fight against the health and well-being of those troops rather than protecting them.”

Privately, some Defense Department personnel were even more pointed.

One senior defense official said that when service members “inevitability get sick, and if they should die, it will be on the Republicans who insisted upon this.” The official, who like others spoke on the condition of anonymity to discuss the polarizing issue, cited the sprawling coronavirus outbreak aboard the aircraft carrier USS Theodore Roosevelt in spring 2020. The vessel - a major power-projection weapon - was sidelined for weeks through a cumbersome quarantine process with more than 1,200 cases in a crew of about 4,800, and one sailor died.

A Navy officer with more than 2,000 sailors under his command recalled standing before his entire crew and explaining why it was not only important to get vaccinated but essential to the Navy’s mission readiness.

“I look like a clown now,” the officer said, intimating that, by reversing the mandate, lawmakers had weakened the military’s ability to enforce and maintain good order and discipline. “What happens when the next [unpopular directive] comes along, whether for vaccines or something else? I’ve lost my credibility to say ‘Do this’ when they know they can probably wait me out.”

“I have been completely undercut in trying to uphold the standards dictated to me from on high,” the officer added. “My sailors will have a hard time trusting me in the future when I say that some controversial policy must be complied with.”

The commandant of the Marine Corps, Gen. David H. Berger, gave a careful answer when asked about the legislation Wednesday, saying that as a military officer, he doesn’t have to get into politics - “nor should I.” He called the discussion about the mandate “a political thing” but acknowledged he would continue to advocate that personnel get vaccinated.

“All of us who are wearing a uniform, we get a bunch of vaccines every year,” Berger told reporters in Washington. “We want Marines to get the vaccine not necessarily because it’s going to prevent them from getting it, but it’s going to prevent them from getting sick, in a hospital, and worse if they have other conditions. So you can expect us to keep pushing for it.”

Katherine L. Kuzminski, a military policy expert at the Center for a New American Security in Washington, said disciplinary problems can arise when rank-and-file troops see the erosion of rules set clearly and forcefully by senior leaders.

“It opens the door for more pushback in the future,” she said. “The military fundamentally functions on the enforcement of the chain of command.”

Austin enacted the mandate in August 2021 as part of a broader effort by the administration to boost vaccination rates and curb the toll of the deadly virus. Since the pandemic began, 96 U.S. troops, 417 civilian Defense Department employees, 36 military family members and 141 defense contractors working for the department have died, according to Pentagon data.

Enforcement of many of the administration’s efforts to require vaccinations in other spheres of life, however, including for federal workers and contractors, have been blocked by the courts or not enforced. Most notably, a sweeping vaccine-or-test policy imposed on large private employers by the Labor Department’s Occupational Safety and Health Administration was struck down by the Supreme Court in January, three days after it was supposed to take effect.

More than 8,400 active-duty service members have been separated over vaccine refusal, according to the most recent service data. The Air Force, which has processed 834 active-duty airmen for separation, paused dismissals in July after a court injunction, said Ann Stefanek, a spokesperson. A group of airmen sued the Air Force alleging religious-exemption requests were mishandled, and a federal appeals court in Ohio upheld the injunction last month.

The Navy and Marine Corps also stopped some separations because of lawsuits. The Army has continued to force out active-duty soldiers without interruption, said Jason Waggoner, an Army spokesperson.

More than 10,000 soldiers in the Army Reserve and National Guard have refused vaccinations, according to service data, though none have been forced out of the service. Instead, the Army has barred unvaccinated reservists from drills, training and pay until they comply with the order.

Republican congressional leaders have made clear that they do not expect the reversal of the vaccine policy to be the last word on the subject. House Minority Kevin McCarthy (R-Calif.) said in a statement that the Biden administration must correct service records and not stand in the way of reenlisting troops who refused to follow the orders they received.

Sen. Rick Scott (R-Fla.) went further, saying Wednesday that anyone discharged should be reinstated in the military with back pay. It is not clear how the military would be able to implement such demands or how lawmakers would force them to do so.

Those discharged over the vaccine mandate were disciplined for disobeying an order that was lawful at the time it was given. Last year, Congress ensured that any vaccine discharges would be categorized as honorable or general under honorable conditions, to avoid denying pension or health benefits to any service members who were ousted under the requirement.

Republicans have clamored for an end to the vaccine mandate since it was first implemented and rallied last month around the idea of threatening to block the new defense spending bill unless it was revoked. The idea, first championed by the conservative House Freedom Caucus, quickly found support across the party.

A group led by Sens. Rand Paul (R-Ky.) and Lindsey O. Graham (R-S.C.) articulated the demand in a letter to Republican Senate leaders, threatening to withhold support for the bill absent a vote to curtail the vaccine mandate and reinstate those who had been affected by it.

The Pentagon, while avoiding commenting directly on the legislation, repeatedly attempted to beat back the pressure, making it clear that Austin supported keeping the mandate in place and considered it a vital tool for maintaining readiness. In the end, Democrats simply did not have the numbers to sidestep the GOP threats.

The Washington Post’s Carol Eisenberg contributed to this report.