Shanghai launched mass testing for COVID in nine districts after detecting cases the past two days, fueling concerns that China’s financial hub may once again find itself locked down in pursuit of COVID Zero.

The nine districts, as well as some areas in another three districts, will conduct two rounds of Covid mass testing between Tuesday and Thursday in order to “identify and prevent outbreak risks as early as possible,” the city government said in a statement published on its official WeChat account. There are 16 districts in Shanghai.

The city reported several cases of infections for Sunday and Monday, and has categorized as high-risk a venue in the Putuo district based on the cases’ traveling records, according to the statement. It added that “risky personnel” related to the venue have visited many districts and places in the city, posing “risk of potential transmission of the virus in society.”

Shanghai reported one case outside quarantine for both Sunday and Monday, according to municipal health authorities.

The city of 25 million people has just emerged from a brutal two-month lockdown that took an enormous toll on residents and the economy. The quick rebound in cases once curbs were eased shows the difficulties of fully stamping out more contagious virus variants and explains why only China is still engaged in the effort of eliminating transmission. Its zero-tolerance approach leaves the country stuck in a cycle of disruptive shutdowns and reopenings that hint at lingering economic pain.

The approach has left China isolated from the rest of the world, and most economists predict the country will fail to meet its annual growth target for this year. Lockdowns have already roiled global supply chains and impacted the operations of global giants from Sony to Tesla.

The country is unlikely to shift its approach any time soon, with President Xi Jinping preparing for a Communist Party leadership reshuffle later this year at which he’s expected to secure a precedent-breaking third term as president. China’s leader last week said, “We would rather temporarily affect a little economic development, than to risk harming people’s life safety and physical health, especially the elderly and children.” 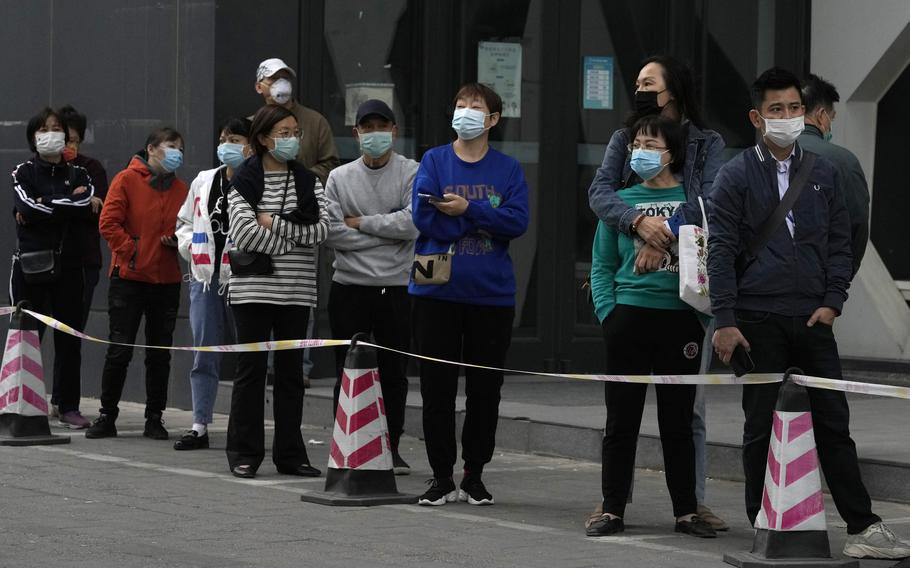 Residents line up for COVID-19 test, Wednesday, April 27, 2022, in Beijing. Workers put up fencing and police restricted who could leave a locked-down area in Beijing on Tuesday as authorities in the Chinese capital stepped up efforts to prevent a major COVID-19 outbreak like the one that has all but shut down the city of Shanghai. (Ng Han Guan/AP)