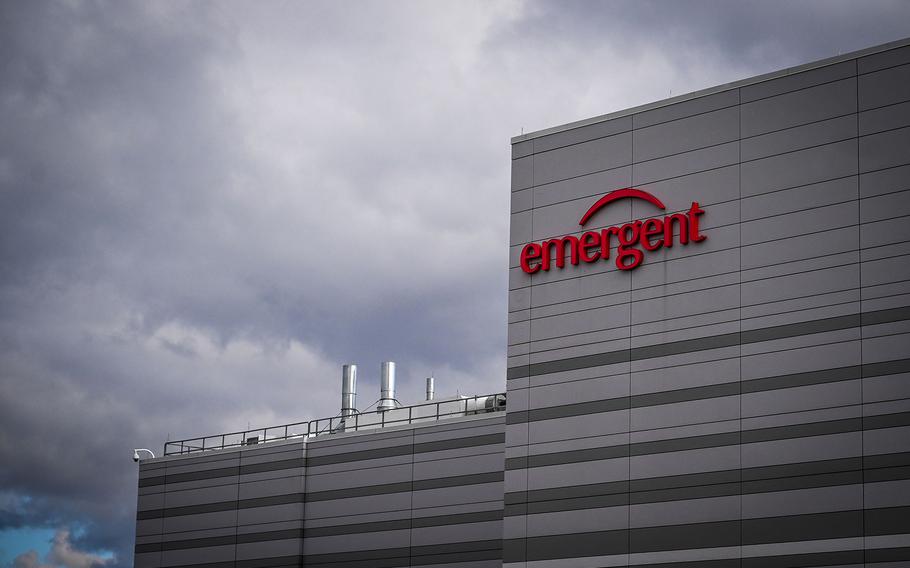 Further, the company sought to hide deficiencies from federal and outside inspectors at the site, built with millions of dollars of federal support, and continued to promote its manufacturing capabilities despite warnings of those deficiencies.

This is according to a final report expected to be released Tuesday after a year-long investigation by the House of Representatives’ Select Subcommittee on the Coronavirus Crisis, a panel that previously found significant flaws in the Trump-era deal to pay Emergent hundreds of millions to make vaccine.

Rep. Carolyn B. Maloney, chairwoman of the Committee on Oversight and Reform, said Emergent’s failures cost “desperately needed vaccines,” in addition to public funds, in a statement ahead of the report’s release.

“Today’s report shows that Emergent profited from the pandemic while violating the public’s trust,” said Maloney, a New York Democrat. “Despite major red flags at its vaccine manufacturing facility, Emergent’s executives swept these problems under the rug and continued to rake in taxpayer dollars.”

Added Rep. James E. Clyburn, subcommittee chair and a South Carolina Democrat: “These doses were squandered despite repeated warnings from employees, outside consultants, pharmaceutical companies and FDA regulators that the company’s manufacturing practices were unsafe and that it was unlikely to fulfill the contract recklessly awarded by the Trump Administration.”

The report, called “The Coronavirus Vaccine Manufacturing Failures of Emergent BioSolutions,” is based on visits to the Bayview facility plus interviews, internal correspondence and documents from Emergent, regulators and the vaccine developers AstraZeneca and Johnson & Johnson.

It follows initial findings released last May from the panel and is another blow to the company once known for its central role in the country’s vaccine preparedness. It now faces regulatory scrutiny and shareholder complaints. Emergent’s founder and executive chairman, Fuad El-Hibri, stepped down in April and died last week.

Even before the coronavirus pandemic began in 2020, Emergent had long been a major supplier of government stockpiles of anthrax and smallpox vaccines and other biodefense-related vaccines and treatments. Three years after a major flu pandemic in 2012, federal health officials gave Emergent $163 million to ready the Bayview plant to produce vaccine for any novel virus.

The plant never won formal authorization from federal drug regulators for the manufacturing lines and last year was forced to pause production of vaccines for three months as inspectors assessed potential cross-contamination of the products.

Emergent is a bulk production facility, and batches are sent to other facilities to be packaged in vials before being shipped to providers, some overseas.

AstraZeneca has not yet been given emergency authorization to distribute its coronavirus vaccine in the United States, though it is in use in many other countries. Federal health officials asked the company to seek another manufacturer to make its vaccine.

The one-dose Johnson & Johnson is one of three vaccines authorized for use here, but it has not been used nearly as much as the two-dose Pfizer/BioNTech and Moderna vaccines.

The Biden administration canceled the federal government’s Emergent vaccine contract in November after paying the company $330 million, according to the report. There was $320 million remaining on the contract.

The new report noted that company officials in testimony before the panel, and at times publicly, have taken some responsibility for the issues, but they have also disputed findings. Emergent CEO Robert G. Kramer Sr. said in a November op-ed in The Baltimore Sun that ending the COVID vaccine contract was the company’s choice.

Kramer said in that commentary that Emergent would continue to manufacture vaccines through private contracts, but Kramer said it couldn’t continue with the federal agreement. He said that though the plant was given federal dollars to expand to prepare for a pandemic, it wasn’t provided with “the necessary drug development work to build and maintain those capabilities.”

As news of troubles at Emergent surfaced last year, the company faced not only the congressional investigation but a shareholder lawsuit for false statements about its capabilities to artificially inflate the stock price.

The stock price had peaked at $134 but dropped as news that the company had to dump vaccine doses. It sank by about half as the lawsuit became known last April and was just over $31 at the market close Monday.

The company’s current and former executives also were sued later by shareholders for insider trading. The suits are pending.

Emergent spokesman Matt Hartwig previously said the lawsuits are without merit. He didn’t respond to request for comment about the new report prior to its release.

The report also said documents showed an Emergent official privately acknowledged warning others about quality deficiencies going back years, and another official noted the company’s lack of experience in using good manufacturing practices and said, “Our risk is high.”

The report contains communications from AstraZeneca and Johnson & Johnson officials who were concerned about launching manufacturing after entering into contracts with Emergent of $174 million and $482 million respectively.

AstraZeneca and Johnson & Johnson also did not respond to request for comment prior to the report’s release.

The report concludes with a warning to federal agencies about Emergent given the “lapses” the committee discovered. Emergent still has other biodefense-related contracts and private contracts.

Those agencies “should ensure they are adequately monitoring Emergent’s compliance with manufacturing practices and ensuring Emergent is meeting all the requirements in its remaining government contracts,” it read. “In the future, the vetting of any prospective federal contracts with Emergent should include a careful consideration of Emergent’s failure to perform under this contract and the actions by Emergent’s executives to keep the extent of its manufacturing problems from its federal and private partners.”