Videos of people dragged into quarantine censored in China 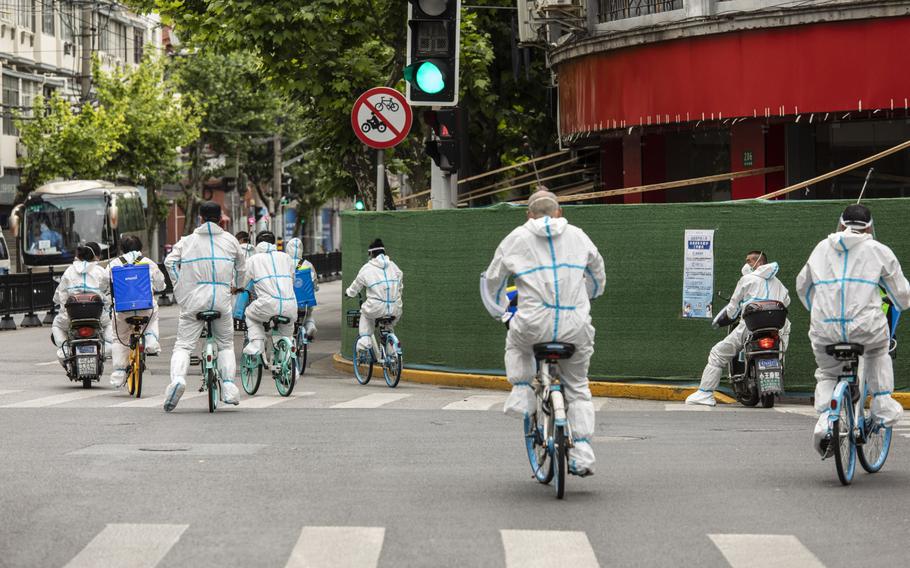 Members of a disinfection crew ride bicycles down a street in Shanghai on May 7, 2022. (Bloomberg)

Videos of people being dragged from their homes by health workers in hazmat suits coursed through Chinese social media Sunday before being pulled down on some platforms, as Shanghai's lockdown enters its seventh week and pandemic restrictions continue to be intensified in Beijing.

The videos — which purported to show COVID-19 positive patients and their close contacts tussling with the workers — come as Shanghai tightens some aspects of its intensive lockdown despite a drop-off in new infections.

The ramping up of curbs comes even as the city reported its fewest cases in more than six weeks, with 3,947 new infections on Sunday, down slightly from 3,975 on Saturday.

Social media posts questioning the legality of forcibly removing people from their homes and taking them to quarantine facilities, or seizing their keys to allow health workers to disinfect apartments, also appear to have been removed in some cases.

One video that is still available to view on some platforms appeared to show two "Big Whites" — as the healthcare workers who enforce China's lockdowns and COVID regulations are known — dragging away a woman kicking and screaming in a residential compound. Bloomberg News reporters viewed the video but were unable to verify when and where it was taken.

Another unverified video posted on WeChat shows a "Big White" using a loudspeaker to warn residents to stay home, saying if one person living in a building tests positive, everybody living in the same building will be considered close contacts and sent to government isolation.

Other videos showing hazmat-suited workers banging on the door of an apartment and taking the occupants to quarantine appear to have been deleted.

China's COVID Zero policy requires all cases and their close contacts to be isolated in government facilities as a way of snuffing out transmission. The strategy was effective at quashing COVID early on in the pandemic, but is being challenged by more transmissible variants like omicron.

The country's ongoing pursuit of the strategy is leaving it increasingly isolated, with other parts of the world dismantling pandemic curbs and living alongside the virus, making the scenes in China all the more stark.

Shanghai's experience has put a spotlight on COVID Zero's weak points, with food and medicine supplies disrupted early on in the lockdown and factories upended by a lack of workers and materials. China, which fiercely polices its internet, has been consistently censoring posts that protest the lockdown.

The pandemic curbs are hitting China's economy, with export growth the weakest since June 2020 in April.

Other places have slowly abandoned COVID Zero in the face of the more contagious variants, and with the U.S. and U.K. never seeking to eliminate the virus. Taiwan was a lingering holdout, but is pushing ahead with easing and reopening moves despite reporting more than 40,000 new cases on both Saturday and Sunday.

Meanwhile, China's capital has so far avoided a city-wide lockdown, but continues to tighten restrictions to keep a lid on new cases, which fell to 49 on Sunday from 62 on Saturday. The capital city had 50 local COVID cases in the past 24 hours by 3 p.m. Monday.

Officials on Sunday told all residents in Beijing's district of Chaoyang — home to embassies and offices of multinationals including Apple and Alibaba Group Holding — to work from home. This followed an order to shut down some businesses providing non-essential services, such as gyms and movie theaters, in the district to minimize infections. All schools in Beijing will remain closed until further noticed.

Uncertainties persist around Beijing's virus situation, local health official Pang Xinghuo said at a Monday briefing. All regions in Chaoyang, Shunyi, Fangshan and other neighborhoods that found cases in the past seven days will conduct three rounds of mass COVID tests starting Tuesday, according to information shared at the press conference.

Shunyi district, where Beijing's international airport is located, will also tighten COVID controls after detecting 21 infections in a cluster at a rural bank. It will close entertainment venues and ask people to work from home, deputy district head of Shunyi said at the briefing.

While a number of Chinese cities besides Shanghai remain under lockdown or other kinds of restrictions, Jilin City in the country's northeast reported its first day without infections in the community since early March, according to the state-run Xinhua news agency. The broader Jinlin province, which borders North Korea and Russia, is slowly emerging from a province-wide lockdown that started mid-March, with cases easing.

On the weekend, Premier Li Keqiang warned of a "complicated and grave" employment situation amid the lockdowns and intensive response to COVID.

Li instructed all government departments and regions to prioritize measures aimed at helping businesses retain jobs and weather the current difficulties, according to a statement late Saturday, which cited the premier's comments in a nationwide teleconference on employment.