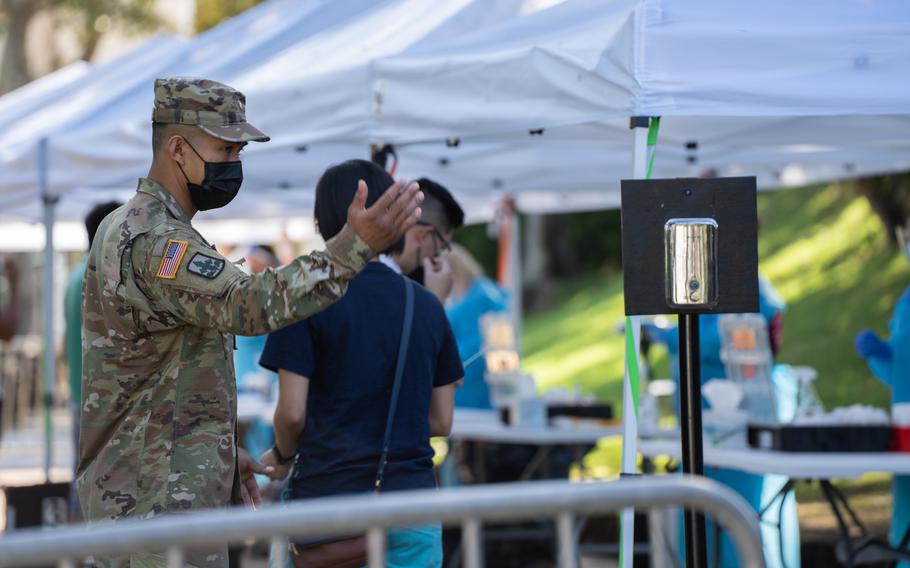 The joint task force had been on orders since April 6, 2020. According to a news release from the Hawaii National Guard, at its peak about 1, 300 soldiers and airmen were participating in COVID-19 response around the state. When the mission concluded, the force was made up of about 300 guardsmen.

“ The Hawaii National Guard has shown its resilience and flexibility and innovation, “ Gov. David Ige told guardsmen Wednesday morning during the drawdown ceremony. “I asked for your help in areas that were truly outside your military training.”

The remaining guardsmen will take mandatory leave and then officially come off orders April 1, when federal funding for the mission officially expires.

“The missions that the Hawaii National Guard executed for the state and counties contributed to the safety and security of the people of Hawaii in their battle against COVID-19 infections, “ said Brig. Gen. Moses Kaoiwi, the task force’s commander. “I am proud of our Guardsman who served our communities in their time of need.”

Throughout its COVID-19 mission the Guard assisted various state agencies. For much of the pandemic, Hawaii guardsmen were stationed at each major airport to help enforce the state’s Safe Travels program, participated in contact tracing efforts and did outreach and delivered masks in low-income housing units. When vaccines began arriving in the islands in December 2020, guardsmen helped administer them.

In June, as vaccination became more widespread and many state restrictions were lifted, Ige gave Hawaii National Guard commander Maj. Gen. Kenneth Hara orders to draw up plans to demobilize the task force by September when federal funding was set to stop.

But by August the spreading COVID-19 delta variant and a surge in cases led officials to extend the task force’s mission until December. A ceremony marking the end of the mission was set for Dec. 17, but rising cases associated with the omicron variant again extended the mission.

The COVID-19 response has been the longest state activation in the Hawaii National Guard’s history. Other long-term activations include Hurricane Iniki in 1992, the 2018 Kilauea eruption, the Kauai floods and landslides in 2018 and security support for the inauguration of President Joe Biden in 2021.