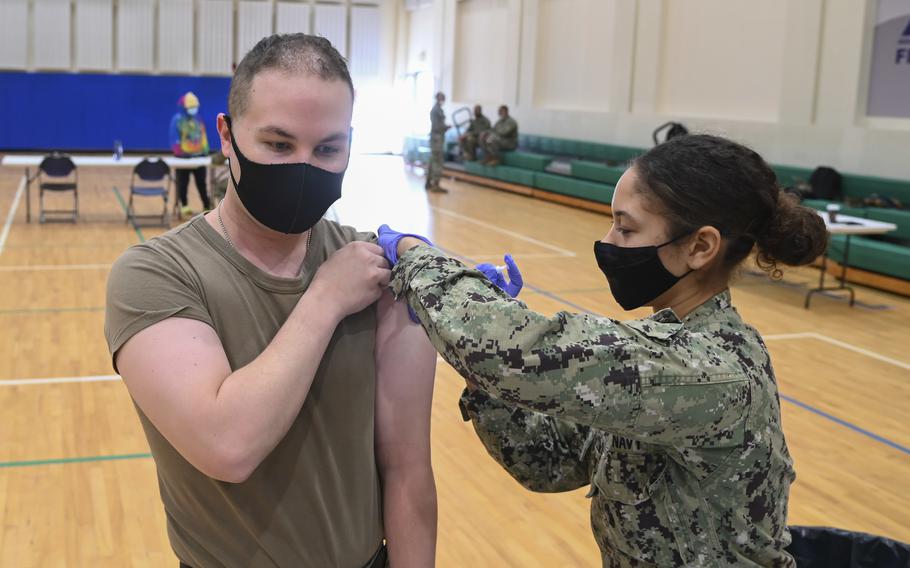 TAMPA (Tribune News Service) — A federal judge has ruled that a Navy commander and a Marine lieutenant colonel who have refused the COVID-19 vaccination on religious grounds can continue serving for now, saying the military has failed to show a compelling government interest in denying the exemptions.

The 48-page ruling was issued in Tampa on Friday by U.S. District Judge Steven Merryday in a lawsuit brought against defendants including Defense Secretary Lloyd Austin.

The pair have been identified only by rank and testified anonymously, with the judge’s consent, in Tampa earlier this month. They described themselves as practicing Christians who believe vaccines would introduce impurities into their bodies. Each also expressed concern about fetal cell lines, used in the research and development of various vaccines and many common medicines.

The military denied them a religious exemption to its service-wide vaccine requirement. They could face discharge if they don’t comply.

Merryday said the Religious Freedom Restoration Act requires that the military grant a religious exemption to any service member harboring a sincerely held religious objection to COVID-19 vaccination unless there is a compelling governmental interest and no less-restrictive alternative is available.

The Navy and the Marine Corps “have failed manifestly” to meet the requirement, the judge wrote. He issued an injunction allowing them to continue serving without “any punitive or retaliatory measure” pending a final judgment in the case.

Merryday had issued a temporary injunction earlier, barring the military from disciplining the pair through last Friday. He notes in his followup ruling Friday that the officers’ likelihood of ultimately prevailing in the lawsuit is a requirement in granting the injunction.

The Navy commander leads some 320 sailors aboard a guided-missile destroyer based in Norfolk, Va. The lieutenant colonel serves as a logistics officer at Marine Forces Special Operations Command at Camp Lejeune, N.C.

The lawsuit was brought by the Liberty Counsel, a religious organization that has fought against the military’s mandate.

In their arguments, the two officers have presented the vaccination alternatives required under the Religious Freedom Restoration Act, Merryday said, including the natural presence of COVID-19 antibodies as well as masking, social distancing, and isolation — all measures “that the Navy and the Marine Corps successfully implemented for more than a year before the development of vaccines.”

“The Navy commander refuses vaccination to remain true to his faith, which requires the preservation of his body as a temple of the Holy Spirit,” the judge said. The lieutenant colonel “voices a sincere objection to ‘any substance . . . connected with aborted fetal cell lines.’ In practicing her religious belief, (she) finds her opposition to abortion irreconcilable with accepting any COVID-19 vaccine.”

Merryday takes issue with the military’s contention that the proposed alternatives “are less effective than vaccination” and “must be implemented in conjunction with immunization,” saying it cannot identify any “‘100 percent’ effective method to defeat COVID-19.”