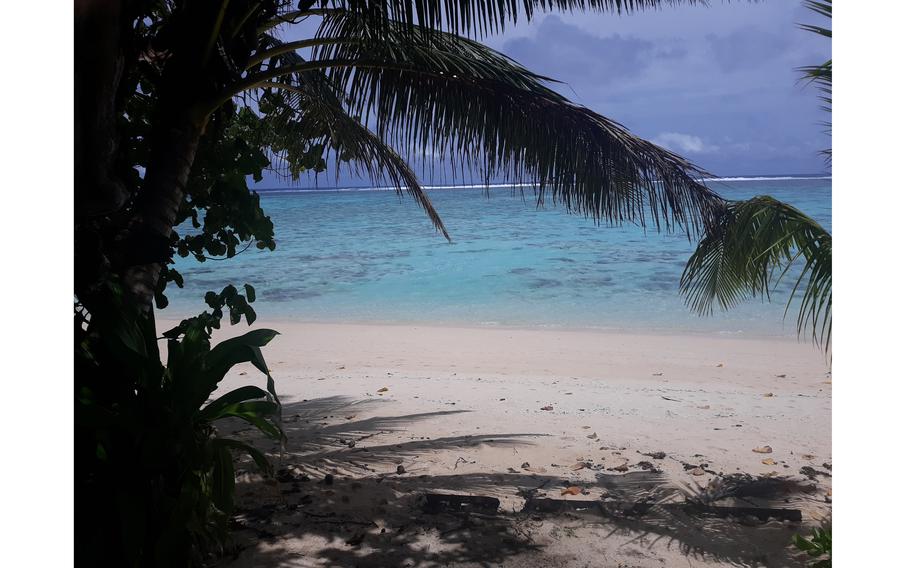 The south shoreline of Rarotonga, the largest of the Cook Islands, which detected its first case of coronavirus on Feb. 13, 2022. (Walter Nicklin/for The Washington Post)

The Cook Islands, one of the few places left in the world that had not reported any coronavirus infections, detected its first case on Sunday.

Prime Minister Mark Brown said in a briefing Sunday that the individual who tested positive arrived in Rarotonga, the largest of the Cook Islands, on Thursday. The person was tested Sunday after learning that a family member who was a close contact had tested positive in New Zealand the day before. The individual was asymptomatic and was isolating and under observation Sunday at private holiday accommodations, Brown said.

The remote South Pacific nation had been bracing for a potential spate of infections in recent days. Officials announced Saturday that a traveler tested positive for the omicron variant upon returning to New Zealand last week after eight days on the islands — although Brown said the case confirmed Sunday was “not connected” to that visitor.

The individual who was confirmed positive Sunday was “traveling with two others, and they will all remain in isolation until they no longer test positive for COVID-19,” Brown said. Officials did not explicitly say whether the two others had been tested. It was “helpful,” Brown added, that the individual had been staying in private accommodations rather than at a resort or hotel.

The person who tested positive is vaccinated, the prime minister said, and had tested negative before boarding a flight from New Zealand. Officials had begun contact-tracing efforts to track the person’s movements since arriving in Rarotonga and to determine potential close contacts.

The islands restarted air travel last month after maintaining strict limits since the start of the pandemic. The Cook Islands government declared on Jan. 13 that the “reopening of borders allows for two-way quarantine-free travel from New Zealand.”

The sandy islands are a self-governing parliamentary democracy but coordinate with New Zealand on international affairs.

“Every step we have taken has led us to the point today where we remain COVID-19 free,” Brown said in a November statement. He said the closure has taken a mental and financial toll and that “keeping our borders closed indefinitely was no longer a viable option.”

It is “futile” to believe that any place can entirely avoid the virus, said David Freedman, president-elect of the American Society of Tropical Medicine and Hygiene.

He noted that travelers to the Cook Islands must still go through New Zealand — which has had some of the world’s most stringent pandemic restrictions and measures.

“And it still got in,” Freedman said. He added: “You can use measures, you can delay, and if there’s a new variant that’s potentially dangerous, you can get ready for the variant ... [but] you’re never going to keep it out.”

Instead of travel restrictions, Lin Chen, director of the Travel Medicine Center at Mount Auburn Hospital in Cambridge, Mass., underlined the importance at this stage of the pandemic of masking, rigorous testing and the continued push for vaccinations and boosters. She added that the confirmed Cook Islands case shows “that the pandemic is not over, and that we need to continue taking precautions when traveling.”

“If we can test rigorously and have plans or policies to have an infected person be quarantined or isolated depending on vaccination status,” she said, “that might allow us to start to go toward normalization.”

The government has hailed its vaccination rate, with the prime minister calling it a “factor that is in our favor as it slows the spread of transmission.” According to the nation’s Health Ministry, 98 percent of the population age 12 and older has received at least a first vaccine dose, with 96 percent having received two doses and 67 percent getting a booster shot.

Until now, the nation of about 17,000 people had been one of fewer than a dozen regions, countries, territories or areas with zero reported coronavirus cases, according to the World Health Organization’s coronavirus tracker.

“I understand that some of you may feel frightened or anxious, but please rest assured that all branches of our government are working together to deal with this situation to protect us all,” Brown said during his Sunday briefing. “We have expected this virus, we have prepared for it, and we are ready to fight it.”