(Tribune News Service) — China’s surprise decision to clear Pfizer Inc.’s coronavirus pill for use offers rare insight into how Beijing may be planning to move beyond the COVID Zero strategy that’s leaving it increasingly isolated.

Paxlovid’s conditional approval over the weekend makes it the first foreign pharmaceutical product China has endorsed for COVID-19, with the country until now sticking steadfastly to domestically developed vaccines and therapeutics, even withholding approval for the highly potent mRNA shot co-produced by Pfizer and BioNTech SE.

Pfizer’s pill will serve a strategic purpose, said Zeng Guang, a former chief scientist at the Chinese Center for Disease Control and Prevention who advised Beijing on COVID control, told investors in a briefing organized by Sealand Securities Co. on Saturday, hours after the approval was announced. The move may lay the groundwork for China’s COVID containment regime to gradually give way to a more flexible approach, he suggested, according to a transcript seen by Bloomberg News and confirmed by Sealand.

“China won’t self-isolate from the rest of world and has various measures at its disposal to change tack,” Zeng said during the event. “Strategizing precedes action.”

Zeng’s takeaway was echoed by experts and analysts familiar with China’s virus approach.

The country is the last significant economy still trying to eliminate COVID, a task that’s becoming increasingly difficult in the face of more transmissible variants like omicron and delta. The lower efficacy of China’s homegrown vaccines is seen as a key reason behind the ongoing strategy, and having an effective antiviral in its arsenal could help mitigate that disadvantage if the virus was allowed to circulate more freely.

“Hopefully it shows that they’re preparing for not having zero cases,” said Sophia Archuleta, head of infectious diseases at the National University Hospital in Singapore and an associate professor at the Yong Loo Lin School of Medicine. “If and when COVID becomes more widespread in the community, they have an effective drug they can deploy.”

The conditional approval is an important milestone in the fight against COVID-19 and reflects the government’s efforts to increase access to innovative medicine in China, Pfizer said in a statement Monday.

Paxlovid’s approval also eases concern that China, the world’s second biggest pharmaceutical market, was actively avoiding foreign treatments when it came to COVID. The Pfizer-BioNTech vaccine, licensed to Shanghai Fosun Pharmaceutical Group Co. in China, is still yet to be rubber-stamped for use there, months after an application was submitted. Nearly 90% of the country is now fully vaccinated, and many more are boosted, with the less powerful domestic immunizations.

“A foreign pill for COVID is much less radioactive than approving a foreign vaccine, because vaccines were at the heart of the soft-power race and such a point of national pride,” said Michael Shoebridge, director of the defense, strategy and national security program at the Australian Strategic Policy Institute, a think tank in Canberra.

Statistical modeling by Chinese experts suggests the country could see more than 600,000 infections a day if the current raft of restrictions were lifted, a vision that is difficult to square in a place that has seen less than 5,000 COVID deaths since quelling its first major outbreak in Wuhan. But such an outlook underscores China’s need for the Pfizer pill, which has been shown to reduce the risk of hospitalization and death by almost 90% and would likely lead to less pressure on China’s largely untested hospital system.

Like with the vaccines, China has several domestic COVID antiviral candidates in the final stages of development, but progress has been slow. Growing vaccination rates worldwide, coupled with omicron’s reduced virulence, makes it harder to prove they can avert hospitalization and death. One of China’s most advanced COVID pills, from Suzhou-based Kintor Pharmaceutical Ltd, had to undertake a second late-stage trial spanning several countries after an initial one in the U.S. failed to show meaningful results amid very low hospitalization rates.

“This approval is likely China calculating that relying on its own antivirals to end the zero-COVID policy would add undue delay, versus the rest of the world opening up,” said Brad Loncar, chief executive officer of Loncar Investments, who closely follows the Chinese biotechnology industry. “It’s a positive to see China prioritizing rejoining the global network rather than taking a more nationalist stance.”

Still, domestic antiviral candidates may still be boosted by the Pfizer decision, since the American company is unlikely to be able to meet all of China’s treatment needs alone, said Zhang Jialin, head of China health-care research at Nomura Holdings Inc. Pfizer has said its global supply of Paxlovid in 2022 is just 120 million treatment courses.

Executives at Shanghai Junshi Biosciences Co, which is in the final stage of testing an antiviral in China and abroad, told investors over the weekend that China’s approval of Paxlovid approval reflects Beijing’s recognition that pills will play a role in ending the pandemic, according to a company spokesperson. Junshi shares jumped more than 5% Monday in Hong Kong.

“It creates favorable conditions for a return to normal on the Chinese mainland, including exchanges with the rest of the world,” Nomura’s Zhang said. “But more details need to be learned.” 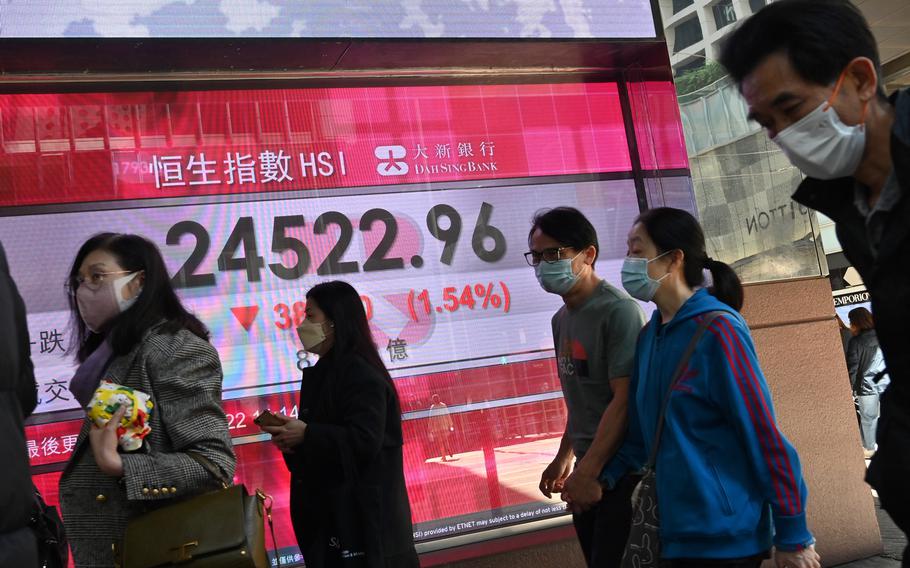 People walk past a sign showing the numbers for the Hang Seng Index before it closes, as Hong Kong shares fell by the most in two weeks, on Monday, Feb. 14, 2022 as the fifth wave of COVID-19 infections in the city worsened. (Peter Parks, AFP via Getty Images/TNS)